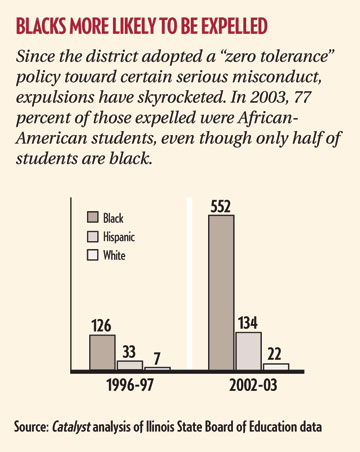 In 1995, Chicago Public Schools unveiled a “zero tolerance” policy that dramatically lowered the threshold for student expulsions. Since then, according to data from the Illinois State Board of Education, the number of expelled students has risen just as dramatically, more than quadrupling to 712 students in 2003, up from just 172 in 1997.

At the time zero tolerance took effect, students could only be expelled for possession of a firearm on school grounds, reports Andrea Horton, assistant general counsel in the CPS law department. But since then, CPS began expanding the list of offenses and, over time, it has grown to 11, including possession of drugs with intent to sell, aggravated battery that leads to “great injury” and hospitalization, and burglarizing school property valued at more than $150.

The vast majority of expelled students are in 6th-grade or above and can seek placement in an alternative school. A “handful” of younger students have been expelled for bringing firearms to school, Horton says.

The spike in expulsions is largely due to stepped-up training of school disciplinarians, says Andres Durbak, director of safety and security for CPS. Some principals, however, say that student behavior has also gotten worse.

“Expulsions are being used more effectively now,” says Durbak. “The whole system works better. The people who need to be removed from the school environment are, in fact, being removed. We have fewer instances where principals may not be taking advantage of all the tools that may be available to them because of a lack of knowledge of how to use them.”

In many instances, she explains, schools make arbitrary decisions about whether a student’s misbehavior warrants expulsion. “It’s mostly disrespect for authority, that type of issue. So much of it is in the eye of the beholder.” She adds that high-stakes standardized testing gives schools an incentive to “get kids who might not do well out at a certain point in the year.”

“We’re not arguing that there should be no school discipline,” Dohrn adds. “But you want to deal with each individual case as it comes up.”

Lauren Adams, who represents students in expulsion hearings and serves as project director for the Justice Center, agrees, but says some school disciplinarians do make an effort to judge students’ cases individually.

“In some schools, it’s a lot more random,” Adams explains. “A kid does ‘X’ and there’s a certain consequence; and another kid does the same thing, and there’s a different consequence. It doesn’t help to form students’ behavior when the consequence is random.”

Donald Morgan, assistant principal at Manley High School on the West Side, says the system provides due process and safeguards the rights of students. “If you really want to get rid of a kid, it takes something of a concerted effort, dotting i’s and crossing t’s,” Morgan says. “If that doesn’t happen, you’re back at square one. They’ll kick it out.”

Julienne Mallory, management support director for Area 18 on the far Southeast Side, agrees that the process is fair and impartial. “It’s not, ‘I don’t like you, I’m going to get rid of you.’ We try to erase that human emotion.”

While expulsions are on the rise, so are referrals to SMART, for Saturday Morning Alternative Reach Out and Teach, a program for students who have committed certain non-violent offenses. In 2002, 787 students were referred to SMART and 86 percent completed the program, according to data from CPS; in 2004, 740 kids were referred and the completion rate rose to 87 percent.

SMART’s eight-week program includes conflict resolution, character education, and drug and alcohol counseling. A parent or guardian must come to two sessions, and students must complete 20 hours of community service. Typical offenses that lead to SMART referrals include possession of small knives, possession of small amounts of drugs or getting into a fight that does not result in serious injury.

Renee Grant-Mitchell, the district’s chief of specialized services, says SMART “is based on getting kids to make better decisions. Kids are encouraged to be engaged and to think through how to problem-solve and think about decisions, instead of acting impulsively. And how to also recognize that there are consequences.”

The parent component is important in “giving parents more knowledge about their kids,” she adds. “Parents say to me that they’ve learned a lot hearing each other, talking to each other. It’s almost like a support group.”

Adams sees SMART as a positive step. “It’s very important that [CPS] have a way to deal with students who shouldn’t be expelled, to give them another chance to stay in school,” she says. “We should try to expand the number and scope of those kinds of alternatives.”

Mallory agrees the program is useful for first-time, nonviolent offenders. But, “if they do something like shoot someone in the leg, and it’s their first offense, we may not necessarily move for SMART,” she says. “We look at everything on an individual basis. We try not to lump everyone into one category.”

Morgan would like to see SMART require team interventions with counselors, psychologists and social workers. “Some kids don’t fulfill the requirements, and then nothing happens. The program should come with other components mandated.”

Ed Finkel is a Chicago-based writer. E-mail him at editor@catalyst-chicago.org.