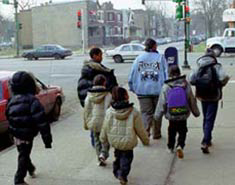 The Johnsons have been forced to move two more times since leaving Cabrini—first to escape gangbangers and then when their apartment building changed ownership. That’s common among the thousands of families who have been displaced by Chicago Housing Authority redevelopment, says Jennifer O’Neil of CHAC Inc., a private firm that oversees the CHA’s Section 8 rent subsidy program. Last year, over 18 percent of displaced CHA families using Section 8 subsidies moved for the second, third or fourth time.