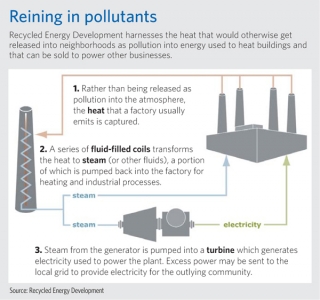 When businessman and environmentalist Tom Casten sees the Fisk and Crawford coal-burning plants spewing their emissions above Chicago, he gets angry. Not only because of the public health effects of the emissions, but because he knows there is a much better way to generate electricity for Chicago. Casten wants businesses, legislators and the general public to see the value of recycling waste energy. Energy recycling entails using a boiler at the top of smokestacks from coal and other plants to capture the “waste heat”–”and use that heat to create steam, which then turns turbines in generators and produces electricity. This electricity can be used onsite and also sold for a profit.

This is the third installment in a three-part series for Chicago Matters: Growing Forward. This year’s Chicago Matters–the award-winning multimedia public affairs series made possible by The Chicago Community Trust with programming from WTTW 11, Chicago Public Radio, the Chicago Public Library, and The Chicago Reporter–will examine how the choices we make today impact our environment and the future of our region. For more information, visit www.chicagomatters.org. From the friendly confines of Dvorak Park in Pilsen, Maria Chavez hopped on her bike and rode along the weedy sidewalks across busy Cermak Avenue just to marvel at the jet black piles of coal stacked outside the Fisk coal-burning power plant. The coal was stacked alongside a boxy, red brick building puffing dirty smoke from a tall smokestack with blinking red lights on top.

Community leaders in a number of local mixed-income neighborhoods say they have found a reliable way to bring people of different races and income levels together: community organizing campaigns. It’s through this kind of activism where these disparate populations share common interests and a sense of solidarity and mission. In Uptown, which was famous in the 1960s through 1980s for multiracial community organizing involving the Puerto Rican Young Lords and Appalachian white Young Patriots, community organizations have fought hard to maintain a genuine mixed-income community in the face of intense pressure from both retail and residential developers. Jamiko Rose, executive director of the Organization of the North East (ONE), has seen plenty of hatred and stereotypes directed at low-income residents by higher-income residents who have moved to Edgewater, Rogers Park and Uptown in recent years. Among other things, opponents of affordable housing at the Wilson Yard development in Uptown distributed fliers equating affordable housing with Cabrini-Green and calling for “artists” rather than “poverty.”

Won’t You Be My Neighbor?

When Chicago’s public housing developments were born in the 1930s, the stated plan was to create idyllic enclaves where low-income working families could develop close-knit communities and thrive. The reality, in Chicago and nationwide, turned out quite differently, thanks to factors including government neglect, police corruption and crime. So in 1992, the U.S. Department of Housing and Urban Development launched its Hope VI program, designating mixed-income communities as the way to redevelop and revitalize public housing. Significant funding was made available for housing authorities nationwide to carry out this model. And it soon became de rigueur for public housing redevelopment from New York to New Orleans to Chicago to Oakland.