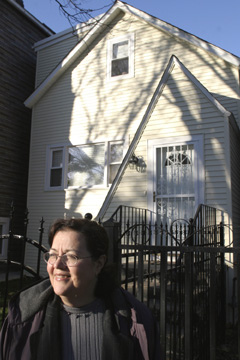 Sandra Traback has long been a familiar face at community policing meetings held at Chavez Elementary. As the school’s principal and president of the Peace and Education Coalition of the Back of the Yards/New City, she needs to stay abreast of what’s happening in the neighborhood.

But at November’s meeting, she had a new status.

In October, she moved from her Oak Park house to her new home two blocks away from her school, becoming a community resident.

“It was great,” laughs Traback, recalling the November meeting. “When I walked in, one of the coalition members said ‘Welcome, to our newest resident.’ The other residents applauded; the police looked confused.”

Traback’s move is an example of a principal practicing what she preaches—a deep commitment to her school’s community and to her students.

“I thought there was so much more I could do if I lived here,” she says. “I felt that I could at least help anchor one block. One person can make a difference. I’ve seen it happen and I hope I make a difference here.”

Traback first began to mull over a move last year. She had suffered a series of major heartaches over the past six years, with the deaths of her mother, father and only sister. Then her daughter left home to attend Washington University in St. Louis as a pre-med major.

“I felt stagnated in Oak Park,” says Traback, who was spending 60 hours or more a week in Back of the Yards. “I realized I had more to give and it wasn’t out there.”

“My mom is very devoted to her school,” says her daughter, Santina Grant. “She wasn’t leaving the school until 9 or 10 p.m. There was always something, a coalition meeting, a CAPS meeting, or it was her Second Chance kids.” Second Chance is an alternative high school based at Chavez.

But when she first mentioned the idea of moving, some family and friends balked. “I thought she was crazy,” says Marcey Reyes, principal of Seward Elementary and a close friend of Traback’s. “This is a violent neighborhood. I will always support her, but I worried about her safety, and I thought she’d never have any down time with the school being in her back yard.”

However, Traback drew closer to making the decision. “I felt like I had friends and family already there,” she says. “My birthday was in February and you know who called me and wished me a happy birthday? Father Bruce and Father Ed.” Both priests oversee parishes in the community and are members of the coalition.

When she finally decided to make the move, Traback approached coalition member John Groene from the city’s Neighborhood Housing Services. The agency was buying and rehabbing abandoned, vacant buildings and homes and selling them to homeowner occupants. Many of them had been prime spots for drug trafficking and other crime.

Groene says he was more than happy to sell one to Traback. “I was very excited when Sandy said she wanted to move,” he says. “It sends a message to the other neighbors. ‘Hey, the principal wants to buy on our block. We’re getting better.'”

Paul Lopez, senior vice president and chief lending officer of Park Federal Savings Bank, another coalition member, provided the home loan. “I was right there when John told her he’d found a house for her,” recalls Lopez, who grew up in the neighborhood. “I told her, ‘If you are willing to move here, then your loan is approved.'”

“The kids on the block, they want to walk my dogs, carry my groceries,” Traback says with a laugh. “A lot of my kids live on this block. They wave. Everyone is looking out for me.”

“I was blown away when I found out. She’s done so much for this community already,” says Shannon Hubbs-Judd, one of Traback’s neighbors. “But for her to take it a step further and move here? Most principals live outside the school community. She’s given the community hope. Everyone is very happy about it.”

Groene points out that the neighborhood is significantly different from what it was five years ago, when the area’s nickname was ‘Murder Field.’ There are still problems, he says, “but for the most part, there is progress. And now that Sandy’s here, it’s created a positive momentum.”

A CPS veteran of 34 years, Traback has been principal of Chavez Elementary for the last 10. Before that, she was a teacher at Brown Elementary on the Near West Side, a Federal Title 1 coordinator in the Office of School Reform and then a counselor at Seward.

“When my Title l position was cut, I called Marcey’s husband, Reynes Reyes, who was principal at Brentano,” recalls Traback. “Reynes told me to call Marcey, who had a counselor position available.”

In 1993, Chavez was built to relieve overcrowding at Seward, and Traback was selected by the local school council to head the school.

While the community views Traback as an asset, she says the move has been good for her, too. “When I was in Oak Park, it took me an hour or an hour and a half on a good day to drive,” she says. “Now it’s a six-minute walk.”

Also, being a resident gives her the chance to see a part of the community not everyone is aware of. “I’m up at 5:30 or 6 a.m. walking the dogs. That’s when you see the working community here. People are loading their cars with tools and other stuff going to work. You only hear about the undesirables.”

Her next projects include helping the coalition secure a new building for Second Chance and finding a use for the shuttered Goldblatt’s department store that will benefit the community.

Thinking of future projects reminds her of a conversation she had with one of her youngest neighbors soon after she moved in.