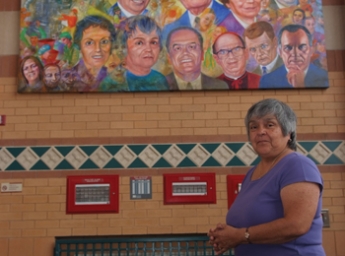 Carmen Velasquez, 69, wanted to provide medical care for immigrants–"particularly those who couldn't pay. She'll soon provide housing as well. Velasquez poses in front of a picture of her father (top center) at Arturo Velasquez West Side Technical Institute, a school named after him. Photo by Joe Gallo.

On a cool afternoon in Pilsen, Carmen Velasquez looks out of her second floor office window in the Alivio Medical Center on 21st Street. Below, in what was a vacant lot, construction workers busily work on a new building. Velasquez smiles as she watches, discussing the completion of Alivio’s latest project. What now looks like six stories of gray concrete and steel beams by next summer will be a state-of-the-art senior facility for low-income residents.

“I can’t wait for it to be done. It will be beautiful,” said Velasquez, 69, the center’s executive director and founder. “We are building a whole campus here, and I love looking out and seeing the project progress each day.”

The first Alivio clinic opened on Western Avenue Jan. 4, 1989 to serve the residents of Pilsen, regardless of their immigration status, whether they had insurance or the ability to pay. The mission was to improve access to medical care and medication and remove language barriers. The clinic, which provides a bilingual staff to service the needs of the community, in 2007 assisted more than 19,000 patients, Velasquez said.

In the past 20 years, the clinic has expanded to a second location in Pilsen, which includes a pharmacy and pediatric dental clinic, and a clinic in Cicero. Alivio has also established itself in Chicago Public Schools, Velasquez said. Next year, there will be more expansion with the opening of an apartment that will cater to low-income families and the completion of a project to build the senior center. Both will be served by the Alivio clinic. There will also be more expansion into Chicago Public Schools, a pharmacy created at the clinic on Western Avenue and dental services provided for adults.

“I really believe that you have to zero in on something, and to have the vision to see where it will go. To want it and pursue it hell or high water, just do it,” Velasquez said.

To Velasquez, the idea of providing quality medical service to anyone who wants it is a no-brainer. Where she sees injustice in the system, whether in advocating for immigration reform or universal healthcare coverage, she feels she is working for change.

The Chicago Reporter recently sat down with Velasquez to talk about the medical center, its successes and its future.

How did Alivio begin?

I’m not a doctor, I’m not a physician. In my education, my focus was on, well, education. I worked for the Chicago public schools, the State Board of Education. In about 1987-88, the Chicago Department of Public Health had a series of hearings. At the hearings, many, many people testified about the issues, in the relationship of access to healthcare, the cost of it and being uninsured. So that kind of poked my brain, and I got pissed. That’s what really moved me to begin to pursue why don’t we in Pilsen have a clinic?

So, to pursue that, I went to see a friend who had just finished her residency at Cook County. And then she went to Mt. Sinai, but didn’t like it there. Then she went to Mercy. So she started asking the same kinds of question as I was, but on the other side of the coin.

So we talked more, and I thought, –˜what the shit?’ So I said, well, why don’t we set up a meeting with Sister Sheila [Lyne, president and CEO of Mercy Hospital], and we’ll proposition her. Our proposition was that we wanted to do this special project. We wanted her to be involved, and also we wanted a special relationship where we would be treated as equals, her, the institution, and us over here, and we wanted $200,000. And to her credit, she did that. That was some risk-taking, because she didn’t know who the hell I was. So we started a little group, a committee, and started strategizing what we even wanted. Then we heard about an initiative, a $10 million initiative, from the Chicago Community Trust. So we submitted a [proposal] that included a request for a three-year operational grant to found a comprehensive community healthcare center. We wanted the world, but they did grant us $987,236.

How did you establish the first clinic in Pilsen?

So one day, me and my friend are driving around, and we park the car at Western, you know, by the –˜L’? And we start walking on the North side of Western near Blue Island. Just going around and asking, “Are you renting anything?”

So we’re walking and I stop because I see this empty lot. This lot with trucks in it. And then I see a muffler shop, and the name of the shop is Velasquez Muffler Shop. So it just hits me, I can feel it. This is going to be the place. It was like a divine light. I go into the muffler shop and I get all ready. I didn’t even have a penny. I asked the owner if he was thinking of selling, and he looks at me and says, –˜make me an offer.’ To make a long story short, we raised another $2.2 million, bought the land, constructed the facility, and built a 10,000-square-foot, two-floor building with 12 parking spaces.

What do patients get at Alivio that they don’t at traditional care centers?

There are a couple of things. Trust, that’s a big one in the community that we serve. And another is that healthcare doesn’t end in the four walls of the patient’s room. It includes becoming a part of the community. It’s a relationship. With my background in education, I didn’t come as a stranger. I had already built relationships with schools.

The staff here has a special mission as well. A part of it is the trouble that comes with being undocumented. There’s all this stuff that come with that. We had immigration reform in 1996 and now it has become very ugly. There is a fear in the community of being intimidated. We’re not the only community that feels this, but it is something that we have to live with it everyday. And that is an obstacle.

I think we need to reaffirm the philosophy of the leadership here that has the courage to say, –˜We treat everyone equally, regardless of immigrant status,’ and that we need to treat everyone with respect. We can extend that type of message with something as simple as having a bilingual staff. Making people feel comfortable and secure.

How does gentrification affect your work?

There is a lot of talk about the gentrification of the community. But I think that Pilsen especially, as a community, knows who we are. Many have fought gentrification, but I don’t think you can fight how life evolves. What we need to make sure of is [that] those of us who live here, stay here, those who grew up here and want to come back have that option accessible to them. There are mixed feelings here, and sometimes some resentment, but I think as long as we do the right thing, the thing that just makes sense, the area can only improve. We are many, and I think we will stay.

What does the future hold for Alivio?

I’d like to see Alivio get more into behavioral health. Depression is a big issue in the Mexican community, and I’d like to see more services available for those issues. There is just so much to do. And we’re not perfect. We struggle with wait times, and we have telephone problems when it rains sometimes. We can always improve on increasing our level of access.

We have hired a couple of Chinese physicians who speak Mandarin and are also fluent in Spanish. I always wanted to do more for the Chinese community, because they’re right next door. So we’re hoping to one day have more of a collaboration with that community.

Where do you find the time to do all that you do?

It’s simple, if you want social change, you have to become very active. That means doing a lot of different things. It can not be all work and no play. At the end of the day, you are simply just another human being. You need to be able to look back and say, –˜Well, I’m tired, but I’m happy.’ I get tired, but I work hard and I play hard.

I also co-own a restaurant, Decima Musa. It means the 10th Muse. It is named after a late 17th century Mexican nun. In that era, women had very few options. You could be a prostitute, a nun or a wife. That’s it. But this woman wrote poetry, wrote music. She became a nun to have access to the academic world, and she wrote books. The Catholic Church didn’t like it much, because she was a woman. They wrote her a letter telling her that being a good nun meant leaving all of that alone. But she wrote a letter back saying she needed to express herself, not just as a nun, but as an individual. I think that’s very important. I didn’t think about that much when I was little. As a woman I don’t think anything like, –˜I’ve come a long way, baby.’ I just do what I want and don’t take shit from anybody. That’s my philosophy.