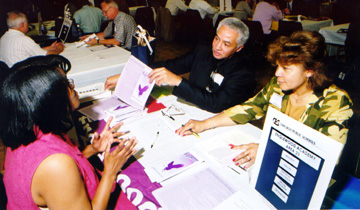 Now into its second year, the CPS Early Hiring program has made some gains since last year, but it won’t meet its hiring goal for June.

By late May, CPS had hired 521 certified teachers for the coming school year, compared with 340 hired at the same time last year, according to Nancy Slavin, CPS manager of teacher recruitment.

However, Slavin predicts that 30 percent of the projected 1,900 to 2,300 teacher vacancies will be filled by September. Earlier estimates had set vacancies at 3,000, but the district later revised the figure.

The Early Hiring program was launched last year to allow schools to make job offers earlier than usual, and to gain equal footing with competitive suburban districts, which often snap up the best candidates before a school term ends. In the past, CPS has not been able to extend offers to teachers until late in the summer because of difficulties with projecting the number of vacancies.

This year, the stepped-up effort began in February, with some new inducements: opportunities for candidates to interview with principals face-to-face at job fairs and early notification incentives for teachers leaving the district.

The incentive plan helps CPS get an early read on vacancies. Carrots include extending health and hospitalization coverage, and fast-tracking lump-sum payments of accrued sick and vacation pay. By early May, 334 teachers had given notice, more than twice the number who had done so a year ago. Teachers have until June to be eligible.

Schools often find it difficult to forecast teacher vacancies, because those who plan to retire or leave wait until the summer and fall to give notice.

Enrollment shifts impact faculty staffing, too. Final determination on teaching slots is calculated on the 20th day after school opens. In cases where fewer slots are justified, teachers are let go.

In the first year of Early Hiring, district officials issued guarantees in June to new hires that they would be able to retain their posts even if staffing levels changed after school began. This year, officials have reviewed their staffing formula and issued staffing allocations to elementary schools in March, Slavin says.

The benefits are two-fold: Principals will know how many teachers they’ll have at the beginning of the year and new teachers will have the necessary time to set up their classrooms, she says.

Still, vacancies are hard to pin down because of personnel movement throughout the district and school closings and consolidations that will affect teachers, she explains. Most of the teacher movement will start after July 1, she adds.

For early hiring to be successful, principals will have to change their habit of waiting until the last minute to seek out quality teacher candidates, Slavin says.

CPS has taken a page from the human resources handbook to aid its teacher recruitment effort. Those strategies include face-to-face interviews with principals at job fairs, exit interviews with departing faculty and professional development and support to enhance their experience. The drive was prompted, in part, by the No Child Left Behind mandates for highly qualified teachers by the 2005-06 school year.

This effort has translated into more aggressive teacher recruiting. “Principals can be energized by meeting with people, and our candidates, in turn, can interview the schools,” says Slavin. It has also yielded some 10,000 resumes.

Principals are being encouraged to market their schools. In line with this, the district is providing bus tours of schools and neighborhoods to acquaint teacher applicants with communities.

Due to its residency requirement, the district set up a resource center last fall to help teachers find affordable housing. It also is partnering with lenders and leasing managers to provide rate discounts in locations across the city.