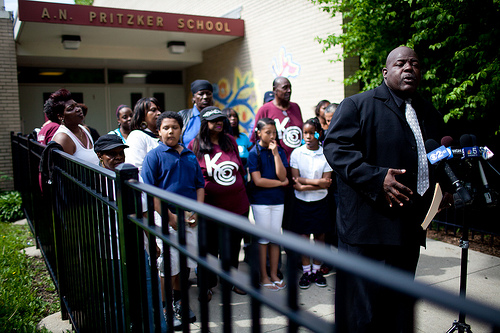 CPS announced on Thursday that half of the students from closing schools have enrolled in new schools and, so far, the vast majority—some 86 percent—are going to the designated receiving schools.

But a breakdown of enrollment numbers by school shows wide variation among parents declaring where they will send their children in the fall. At King on the West Side and Parkman and Bontemps on the South Side, fewer than 10 percent of parents enrolled their children in new schools. At Stockton on the North Side, where the building is not closing but Courtenay’s staff is taking over Stockton’s building, nearly everyone enrolled, according to CPS data.

CPS officials had said they wanted all parents to fill out forms indicating where they will go by Friday, 10 days after the historic vote to shutter 50 schools. However, district officials acknowledge that some parents might still be deciding where to send their children.

“Parents who remain undecided can also register their child throughout the summer leading up to the start of the school year on August 26,” a press release states.

CPS says some 11,800 students attend closing schools and that almost 5,800 have enrolled. These numbers include special education students who have been “placed” by CPS in separate programs that are moving.

Just because a parent turns in enrollment forms doesn’t mean that students will show up in September. Parents can and do change their mind.

However, CPS leaders would like to get a handle on where parents intend on taking their children as enrollment is the main factor driving school budgets, which have yet to be given to principals. “Early enrollment is key to a successful transition for students,” CEO Barbara Byrd-Bennett said in the release.

CPS spokeswoman Molly Poppe said students whose schools are relocating, but not closing, can enroll in a new schools if they want, but they are not included in these figures.

While parents of closed schools are guaranteed a spot in a designated receiving school, they have been told that they can choose to send their children to other neighborhood schools, if seats exist.

Wendy Katten, president of the parent advocacy group Raise Your Hand, said she has heard from parents who are unclear what they can or need to do if they are interested in other schools. She notes that many of the designated receiving schools have been proven to not be much better than the closing school.

“To me one of the biggest issues is the lack of time,” she said. “It is not clear to parents whether they are able to go on a tour or how to get clear information. There is an assumption that the education of their children is not important to parents.”

One big question is whether schools with excess capacity under CPS guidelines, but with waiting lists for special magnet or selective programs, have to take students. This was tested on Thursday by a group of parents organized by the Kenwood Oakland Community Organization.

Education organizer Jitu Brown took mothers and grandmothers from South Side schools–Overton, Williams and Parkman—to Pritzker Elementary School in Wicker Park. The receiving schools for Overton and Williams are the poorest-rated in the district, while the receiving school for Parkman has a mid-level rating.

All of the parents with Brown said they were refusing to enroll their students in the designated receiving school and were still fighting to keep their schools open.

“We will remain open,” said Irene Robertson, who has children at Overton. “We are not going to allow you to take our schools.”

Pritzker, which houses a gifted program, a magnet program and is a neighborhood school, has a Level 1 rating, the highest rating CPS gives. According to CPS’ utilization formula, the school could house 750 students. At the moment, its population is around 670.

Brown said the school has about 75 open seats and his parents would like them.

At about 9 a.m., the parents walked into Pritzker. Principal Joenile Stevente Albert-Reese met them at the desk in the office. Albert-Reese showed the group Pritzker’s waiting list for next year. It went on for pages and had hundreds of names.

“We will be happy to add your name to the list,” she said.

Brown told her he thought the waiting list should be waived, considering the children are being displaced against their will.

Albert-Reese said that is an issue that must be taken up with central office.

She said she thinks the school utilization formula for her school is wrong because it doesn’t take into account the parent room, the Spanish room, an art room and a science lab. And this year she might lose some of these rooms as more neighborhood families are enrolling their children. Pritzker must accept those living in the attendance boundary.

A few parents put their names on the waiting list and Brown told Albert-Reese that he has nothing against Pritzker. “I just want our babies to have the same opportunities as your babies,” he said.

Brown said throughout the summer he plans to take parents to highly-rated schools with space and try to get them to enroll students from closed schools.