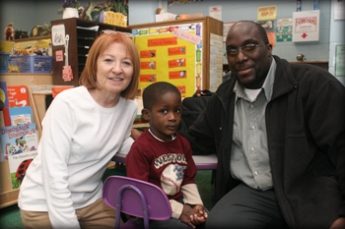 Cornelius Cook enrolled his 5-year old son, Semaja, in Debra List's class at the Hansberry Child-Parent Center, where he studied more than 20 years ago. (Photo by Carlos J. Ortiz)

It’s only 9 a.m., but Debra List’s preschool class is already in high gear. About 20 three- and four-year-olds dash about in their summer school room, bouncing from one friend to the next, climbing on chairs and hauling toys from one play area to another.

As if by magic, List quickly gathers the giggly group onto the carpet in front of an oversized easel. She asks the children what animals they think they might see the next day on a trip to the Lincoln Park Zoo. She then draws the animals on the large pad on the easel.

“What’s another animal we might see?” she asks the children.

“A tiger!” the group responds.

“What is the first sound in tiger?”

Just as the children discuss the letters and sounds of the animals they are likely to see, they will have similar conversations with List about the trip once they return. “If we see an animal that we didn’t draw—like a flamingo; no one said flamingo!—I will draw that tomorrow,” List tells the children.

“They can stand on one leg without falling!” shouts Asia Bair, 5.

“Let’s all pretend that we are flamingos now,” List suggests.

The children all get up and tuck their hands in their armpits to flap their “wings.” They giggle and hobble on one leg, each with one foot placed against the knee on their opposite leg.

Asia and her classmates are students at the Hansberry Child-Parent Center, in the West Garfield Park neighborhood on Chicago’s West Side. Hansberry is one of the city’s 13 child-parent centers—a free, federally funded program available in low-income neighborhoods.

“The parts are all integrated,” said Sonja Griffin, manager of the Child-Parent Center program, sitting in one of the impossibly small, yellow plastic chairs while the children played outside. “This zoo trip can incorporate so many skills. There is literacy because they read stories about animals. There is art because they draw the animals. There is writing because they will dictate stories. There is science, and there is math because you can count the steps up to the bus.”

Teachers and parents swear by the child-parent center program, and researchers have documented that the centers’ preschool students fare better as young adults than children who do not attend.

Child-parent center students were more likely to graduate from high school and less likely to become unemployed, draw public assistance or end up in prison. For those reasons, researchers say child-parent centers should be viewed as cost-saving measures.

But dwindling resources and other factors have converged to force the closure of 10 child-parent centers in the past two years. Those centers were replaced with other preschool programs.

“Everything was cut,” said Paula Cottone, deputy chief of the Chicago Public Schools’ Office of Early Childhood Education. “[The child-parent centers] weren’t singled out. It’s just because they are small—[the cut] looks bigger.”

The Chicago Public Schools administer federal and state grants for several preschool programs. Serving just 1,000 children, the child-parent centers are the smallest but most expensive of these programs, Cottone said.

Several parents say closing the centers is a big mistake.

“This is –¦ a great foundation to get them started. I wouldn’t be surprised if all or most of these kids go all the way through high school or on to college,” said Asia’s mother, Tara Offord, 32.

Arthur Reynolds, a professor of child development at the University of Minnesota, has studied children in Chicago’s child-parent centers for more than two decades. He praises the centers’ literacy.

“Organization and structure are a big key to the program,” he said “It heavily emphasizes school readiness skills, phonics and also experiences like field trips and then talking about what they learn.”

Since 1985, Reynolds has tracked 989 children who attended child-parent center preschools and a “comparison group” of 550 children of similar socioeconomic backgrounds who did not attend although some were enrolled in other preschool programs.

Reynolds concluded that the child-parent center’s benefits-to-costs ratio was more than 7-to-1. His research showed that child-parent center students were less likely than those in the comparison group to incur health care, public assistance, prison and other “social costs.”

Using his projections—and considering that nearly 100,000 children have participated in the program since it began in 1967—Reynolds estimated that the child-parent centers have saved nearly $2.6 billion in social costs.

But officials say budget cuts, neighborhood gentrification, the demolition of public housing and changes in welfare laws have led to the closure of a dozen child-parent centers and forced the remaining centers to shift from the program’s original model.

In June of 2005, funding cuts resulted in each center losing its “community representative,” who linked families with shelters, food pantries, clinics and other services in the neighborhood, Griffin said.

A year later, most of the centers lost their parent resource teachers, who had helped parents work with their children on behavior modification, child development, nutrition and teaching aids for continued learning at home, Griffin said.

The four largest centers still have the parent resource teachers, and Cottone said the parent programs continue at the remaining centers under the direction of each center’s head teacher.

Dwindling membership is another foe threatening the centers. Griffin said the families of many children were scattered across the region when their public housing buildings were redeveloped or torn down. Membership also fizzled in areas where low-income housing was replaced by luxury condos, she said.

The original model called for two half-day classes, one in the morning and one in the afternoon. But many parents who are required to be at work or school most of the day may need a full-day program, Cottone said. “With new [welfare] laws –¦ you have to be in work or school. Moms have to do what the new laws tell them to do.”

Some parents might opt for other programs. And those who keep their children in half-day child-parent centers have less time for the focused parental involvement, which many say is so crucial to the centers’ success.

Since 2004, a total of 10 child-parent centers have been replaced by federal Head Start or state prekindergarten programs, with most of them on the South and West sides. But some of the child-parent centers, including the Hansberry Center, have kept their doors open by fusing resources and guidelines with other programs.

List’s class is a joint child-parent center and Head Start room, known as a “collaboration room,” because its funding is pulled from both federal programs. List said the child-parent center’s funding covers activities from 9 a.m. to 2:45 p.m. And Head Start funding allows for parents to drop-off their children as early as 7 a.m. and to pick them up as late as 5 p.m.

Cornelius Cook enrolled his 5-year-old son, Semaja, in List’s class because he had first-hand knowledge of what the program offers. Cook also learned his letters and numbers from List more than 20 years ago in the very same classroom.

Cook, 25, a participant in Reynolds’ study, was in the program from ages 3 to 5 but continued to receive support from the center throughout his academic career. “I still had that support even through high school,” said Cook, now a custodial supervisor at Midway Airport, who also serves as the Head Start representative and local school council chairperson for Hansberry. “If we ever needed help, they would help us. Computers or whatever we needed was always there for us. Any of the teachers would help us.”