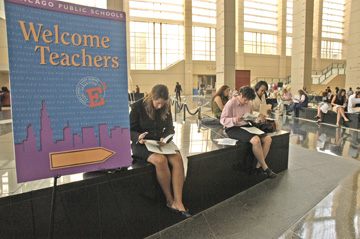 In March, Chicago Public School officials predicted that a third of new teachers for the coming 2004-05 school year would be hired from alternative certification programs, a figure that CPS said would be more than double the number hired from such programs in 2003-04.

Most alternative programs are aimed at career-changers, and Schools CEO Arne Duncan called such programs “extremely valuable,” touting the benefits of bringing experienced professionals into the classroom where they could have a positive impact on students’ lives.

But the prediction fell short. By late August, only 25 percent of all new teachers hired were from alternative certification programs, according to CPS data.

The hiring surge is just one sign of the district’s growing interest in alternative certification. CPS now has partnerships with nine alternative programs, most of which take one to two-and-a-half years to complete and put participants into the classroom while they earn their teaching credentials. Another partnership with Rockford College in Rockford, Ill., is in the works, but the school’s alternative program is sending 14 elementary bilingual teachers to CPS this fall.

In addition, CPS now has an office called Routes to Teaching, created by Duncan almost two years ago to manage the partnerships and coordinate hiring from alternative programs. Director Toni Hill explains that alternative programs previously had to work with several departments. “Now, they are all getting the same message and have one place to call to resolve issues and concerns,” she says.

And last year, CPS instituted a requirement that teachers hired through alternative programs commit to stay for three years after completing coursework and obtaining certification. If they do not, they must reimburse the district for tuition costs.

Research in the works

But while CPS increases its hiring from alternative programs, research on their effectiveness is limited. Experts say that those studies that have been done are inconclusive and often not well-designed (see related story).

However, one noted expert says there’s a larger issue than simply whether alternative certification is better than traditional four-year training from a school or college of education.

“One is not better than the other, if you look at what it takes to prepare a teacher,” says Barnett Berry, executive director of the Southeast Center for Teaching Quality at the University of North Carolina in Chapel Hill, N.C. “There are horrible alternative certification programs and terrific programs. There are horrible college of education programs. There are terrific ones. It is not a question of alternative certification vs. traditional programs. It is high quality vs. low quality. “

CPS will try to determine the effectiveness of programs it partners with by launching a major study this fall. With a $45,000 grant from the North Central Regional Educational Laboratory (NCREL), CPS and the University of Illinois at Chicago will begin the first phase of a study examining how well alternative-certification teachers are performing in the classroom and the quality of training programs.

“We don’t know much nationwide about these programs,” says Steve Tozer, a professor of education at UIC who is overseeing the study. “And in Chicago, we don’t know how these programs work and the steps they are taking to produce quality teachers.” Among the questions the study will seek to answer, he explains, is whether teachers are receiving adequate support from trained mentors and whether they are teaching in hard-to-staff schools.

“One of the arguments we hear for alternative programs is that they are meeting needs that are not being met otherwise,” says Tozer. “So we want to see if they are. These are not hostile questions. It is just that we don’t know much about what these programs are contributing to the picture.”

The first part of the study, expected to be complete by spring 2005, will examine how alternative certification programs operate and how well they meet staffing needs. In addition, using a sample of 30 classrooms, researchers will measure teacher attrition and instructional quality.

CPS and UIC have not yet obtained funding for this second phase.

Janet Knupp, president of The Chicago Public Education Fund, says the district deserves credit for planning the research study. The Fund has raised over $18 million to support several education initiatives, including three alternative programs: Teach for America (in Chicago), the Golden Apple Teacher Education (GATE) program and the Academy for Urban School Leadership.

“Now they are taking the next logical step and plan to look deeply and find out which ones are really quality programs,” says Knupp.

Filling in the gaps

While the question of quality is up in the air, there is one plus about alternative certification: The programs appear to be helping the district solve its teacher shortage problems. The majority of teachers hired through alternative certification are filling slots in math, science, special education, bilingual education and other subjects for which the district has a chronic shortage of teachers.

“The universities were not producing enough teachers in the areas we need,” explains Hill. She estimates that 50 percent of all math and science teachers hired in the district for 2004-05 are from alternative programs, up from 45 percent last year.

However, final hiring figures for math, science and other shortage areas will not be available until the end of September.

“The big positive [of alternative programs] for school districts is you recruit for where the demand is great,” says Feistritzer.

Former Fenger High Principal Phyllis Hodges turned to alternative certification programs when she could not find the special education teachers her school needed. She hired four.

“They are very effective teachers and two of them are pursuing additional certification in math and English,” says Hodges. “They are real serious about this.”

At a CPS teachers’ fair this summer, half the 300 resumes Manley High Principal Katherine Flanagan received were from social studies teachers. (For more on Manley, see related story.)

“There were droves of them,” says Flanagan, who questions why colleges do not do more to dissuade education majors from getting credentials to teach subjects that already have a glut of candidates.

Hill says her office has had mixed results when asking colleges and universities to guide students into teaching careers in high-need areas.

Private universities have mainly been unresponsive. “Some of them have said, ‘Hey, these kids are paying big money, they should be able to take what they want,'” Hill says.

Public universities, she adds, have been more receptive.

“We do try to steer them to shortage areas. We have more kids than we can handle in the elementary education program,” says Chris Sorensen, the dean of the College of Education at Northern Illinois University. “We are encouraging special education, but a lot of students have their hearts set on teaching small children. It is very difficult to convince them to do anything other than that.”

NIU has 1,200 students studying elementary education, compared to only 600 studying special education. Sorensen says counselors do not have contact with most elementary education majors early in their college careers—when it would be easier to steer them down another path—because 60 percent of them are transfer students from community colleges.

When students cannot get in the elementary program because of the glut, some parents have even called the school to ask if they are aware of the teacher shortage, Sorensen says. “I tell them, ‘Yeah, but it’s just not in elementary education.'”

The groups do joint classroom observations, take some courses together and talk about what they’re seeing.

“We’ve had some kids switch majors because of this program,” says Sorensen. “It has helped to change the perspective of the elementary ed student.”

Alternative programs have been a growing source of teachers in shortage areas. But the district, which pays partner colleges and universities between $2,000 and $12,000 for each candidate who wants to work in CPS, also looks to these programs to find teachers who have a strong interest in teaching children in low-income communities.

“These people will be going into the neediest classrooms. They are not going to the Whitney Young’s or the Walter Payton’s,” Hill explains, referring to two of the district’s selective-admissions high schools.

Hill’s office also looks for male, bilingual and minority teachers. About half of teachers in CPS are minorities, according to state school report card data, but data from the Department of Human Resources shows that some schools still need minority teachers in order to comply with the faculty integration requirements found in the federal desegregation consent decree. Only 23 percent of CPS teachers are men.

Chicago launched Illinois’ first alternative certification program, Teachers for Chicago, in 1991. The partnership brought together CPS, the Chicago Teachers Union, the Golden Apple Foundation and area colleges, but it was discontinued three years ago in part because it was structured for schools with at least three teacher vacancies, leaving out schools that were interested in participating but had fewer job openings.

With the exception of Teach for America and the Golden Apple program, any applicant to an alternative program who wants to teach in CPS must apply through the district, not the school. “We are the customers, so we do the screening,” Hill explains. “If we think these people suit our needs, then they go to the university to be admitted. The universities have never said no to anyone we’ve sent to them.”

Since last year, each candidate has been paired with a mentor from GOLDEN, the district-wide mentoring program for new teachers.

Previously, teachers on the alternative certification track did not get a mentor until they finished their program. But the district realized that, as novices, the new teachers needed help with classroom management and day-to-day tasks such as keeping grade books, marking attendance properly and planning lessons.

Once they are in the classroom, advocates say teachers from alternative certification programs are just as capable as those from traditional routes.

One advocate is Principal Patricia Johnson of Kershaw Elementary in Englewood. When Johnson was working as a teacher at Tilton Elementary in West Garfield Park, she didn’t think much of teachers from alternative certification programs.

But Johnson discovered that the now-defunct Teachers for Chicago program would send teachers to schools with three or more vacancies and persuaded her principal to give it a try, since Tilton had problems filling teaching positions because of its location in an impoverished community.

“At that point, I thought they would be better than nothing,” Johnson recalls.

But once they were on board, she was surprised to discover that the newcomers were competent. In fact, Johnson was so impressed that she later became a coordinator for Teachers for Chicago.

“Before, I was certainly biased because I came from a college of education,” says Johnson, who attended Illinois State University. “But that experience made me take a second look at alternative certification programs and change my perspective of teachers that come from them.”