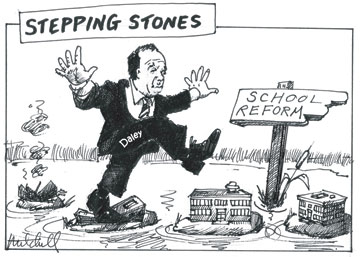 To save some $6 million, students will no longer take state tests in social

studies or writing beginning in 2005, state education officials announce. Because

the federal No Child Left Behind Act requires testing only in reading, mathematics

and science, legislators elected to stop the tests to help pay for the $154-per-pupil

increase in state funding for local school districts. But some education experts

classroom time being spent on the subjects.

Citing poor academic performance at their schools, the School Board fires principals

agree to quit, but the board does not name them. Some 20 principals are given

new plans for improving their schools. The leader of the local principals group

inform local school councils. A CPS spokesman says the actions were an employee

a 2.4 percent increase in school property taxes. The increase will raise $40

million, but more cuts will have to be made throughout the year to make up the

question whether the budget is as lean as CPS claims.

Supt. Rudy Crew plans an overhaul of 39 failing schools, according to the Aug.

17 Miami Herald. The plan includes 10 more days in the academic calendar, an

extra hour in the school day, smaller classes and more training for teachers.

Crew will have to negotiate with labor unions to implement the plan, but if

the unions resist, Crew could take advantage of state Board of Education rules

schools. The director of United Teachers of Dade County says teachers who want

to leave the 39 schools should be allowed to do so.

and a safe school environment, according to the Aug. 11 Los Angeles Times. The

proposed settlement, which is subject to approval by a judge, would require

the state to spend $1 billion to improve 2,400 low-performing, deteriorating

schools. The state will also pay nearly $139 million for new textbooks this

students who might drag down test scores, according to the Aug. 12 Lexington

Herald-Leader. Aimed at students who are still in school, the program requires

scores. But critics argue that requirement can be sidestepped because a student

could complete the GED program, then be pushed to drop out before the end-of-year

state tests are given.

lottery. Education should not be a game where I cross my fingers.”

conference where activists spoke against Renaissance 2010, which favors charter

credits, and find that there are no suitable courses available for them senior

year. How can we provide advanced courses to students who are too few in number

to make up a full class?

Edward Klunk of the Office of High School programs. Participating schools have

a student mentor to oversee the program.

at any of 12 local colleges. For more information on the College Bridge Program,

talk to a guidance counselor at your school.

in federal Title I poverty funds this year, bringing in $291 million,

an increase of 17 percent, according to a report from the Washington,

D.C.-based Center on Education Policy. The report explains how the No Child

districts like Chicago. First, Title I now uses annual, rather than biennial,

Census Bureau updates of the population of low-income children, making the formula

more accurate. Second, the formula is now weighted in favor of children in high-poverty

cities, which means that each such child counts more than a child in a low-poverty

city. 44 percent of districts that receive Title I funds will

get more money, while 56 percent will receive less. To read

the full report, go to http://www.ctredpol.org.