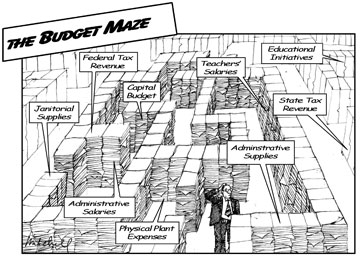 After years of litigation, the Board of Education agrees to pay $13 million for the Pacific Garden Mission homeless shelter next door to Jones College Prep High School. The shelter will be razed to make way for the high school’s $20 million expansion project, expected to break ground in 2008. Jones Principal Don Fraynd says that the high price of the Pacific Garden property may have cut into the project’s budget. Pacific Garden’s new facility will be built at Canal and 14th streets.

Children who received tutoring offered by CPS under the No Child Left Behind Act made academic gains comparable to children who were tutored by other large, private companies, according to a district report. Children in the CPS program gained 1.08 grade levels, compared to a citywide gain of 1.09. The district is appealing a decision by the federal government to bar CPS from providing tutoring because of the system’s failure to meet NCLB standards. CPS served about 30,000 students.

At a meeting of administrators, CEO Arne Duncan announces that the district is scrapping the Iowa Test of Basic Skills. CPS will rely on the ISAT to determine whether schools are placed on probation and whether students in grades 3, 6 and 8 will be promoted. Instead of the ITBS, CPS will administer a shorter reading assessment called Stanford Learning First in October, January and May. CPS says the Stanford is intended solely as a diagnostic tool to help improve instruction.

For the first time, about 50 teachers from a dozen charter schools across Massachusetts have joined the state’s main teachers union, according to the Aug. 10 Boston Globe. The new teachers will be associate members with only limited benefits, but union officials say the move will begin paving the way for giving charter teachers a voice on matters such as work hours and pay. Charter proponents say the union is trying to damage the charter school concept. Teachers, however, cannot bargain until 60 percent of teachers at a school agree to join the union.

A new $5.3 million initiative is intended to spur school districts to require high school students to take four years of math, according to the Aug. 5 Pittsburgh Post-Gazette. Only about a third of districts now require four years of math. Under the initiative, 63 school districts and three additional schools will share grants of $50,000 to $168,000 to improve their math curricula. Chicago Public Schools requires three years of high school math.

More than 600,000 middle and high school students will have to spend a quarter of the school day in intensive reading classes this fall, after failing the reading section of the state’s achievement tests, according to the Aug. 4 Orlando Sentinel. Students will have to stay in the classes until they raise their scores. Schools are dropping elective courses to make time for the reading classes, and hundreds of teachers are taking courses to become qualified to teach reading. Science, math and social studies teachers will also be required to show that they are incorporating more reading into their curricula. Last year, only 44 percent of 8th-graders and 32 percent of 10th-graders passed the reading test.

“You need to start out by electing a moderate Republican as governor.”

CPS is assessing schools a technology fee for computer connections in the coming school year. Is that legal?

Possibly not, according to federal and state officials contacted by Catalyst.

CPS is now charging schools $2 per month for each computer connected to the district’s network, to pay for virus protection and other network services formerly covered by the district. Schools can use one of four funding sources for that fee, according to the district’s Office of Technology: state or federal poverty funds, money from the general education fund that covers school supplies, or money raised by the school.

But using poverty funds to replace district funding may violate the law, federal and state officials say. That money is supposed to ‘supplement’ education for low-income students, not ‘supplant’ local funding. “In the absence of federal funds, they would be providing virus protection. That would seem to be supplanting,” says Chad Colby, a spokesperson for the U.S. Dept. of Education in Washington, D.C. He adds that the feds plan to investigate the matter. State poverty funds could cover any increase in network service expenses this year, but could not replace prior funding, says Richard Loman in the Accountability Division of the Illinois State Board of Education.

SPRINGFIELD—Chicago Public Schools is partnering with the state on a new $2.1 million federal program designed to add 250 bilingual teachers over the next five years. Recent college graduates who are fluent in English, have a bachelor’s degree and can pass a proficiency test in one of 14 languages (Arabic, Cantonese, Greek, Gujarati, Hindi, Japanese, Korean, Lao, Mandarin, Polish, Russian, Spanish, Urdu and Vietnamese) can apply. Participants will work as bilingual teachers in CPS for three years, while studying to earn their teaching credentials and a master’s degree in education from Northern Illinois University. The coursework is expected to take about two and a half years, says Robin Lisboa, division administrator for English-language learning at the Illinois State Board of Education. Courses will be held in Chicago. —Pat Guinane