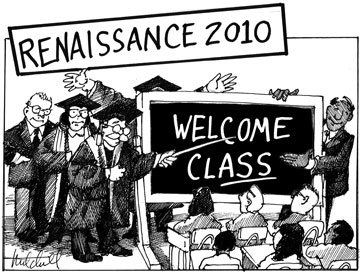 The number of kids who will have to repeat a grade drops, but the percentage

rises. About 7,900 students were retained after they completed mandatory summer

school, down from about 10,800 last year. But that figure is 32 percent of summer

performance were not required to attend summer school this year, and no student

could be retained twice in the same grade grouping, even if their test scores

the federal E-rate program in the wake of an August federal probe. Government

contracts and general disorder, according to an investigation by the Chicago

Tribune. The district was heavily criticized for allowing about $8 million in

equipment to sit unused in storage. In October, a House subcommittee will hear

testimony on the E-rate from CPS officials.

A third of schools, 212, are placed on academic probation because too few students

schools had to meet the standards or norms. Last year, the thresholds were 25

percent and 15 percent respectively. Schools on probation must spend their discretionary

funds on designated programs, such as full-day kindergarten or reading specialists.

Under a federal grant, teachers in the Minneapolis and Waseca school districts

may qualify for bonuses based on peer reviews and improved student achievement,

according to the Sept. 14 St. Paul Pioneer Press. Teachers will get bonuses

to become master teachers and coaches for additional bonuses of up to $8,000.

Three Minneapolis schools and all four schools in Waseca will participate. Each

district will receive $2.6 million. Minnesota is one of eight states in the

teachers with the lowest-achieving students, according to the Sept. 9 Post and

Courier. The state Supreme Court ruled in July that school districts need to

experienced teachers are likely to resist reassignment without incentives. One

idea up for debate would offer teachers $16,000 in incentive pay over seven

schools in the city, according to the Sept. 1 Washington Post. Parents cited

a variety of reasons for their decision, including transportation challenges

and a preference for programs in public or charter schools. Of the 1,359 students

who were awarded vouchers, 1,069 had been placed or were being matched to private

Headline on a Sept. 23 press release from CPS announcing that

212 schools, instead of the expected 289, have been placed on probation. Eighty-two

schools were on probation last year.

cluster program at Mayer Elementary in Lincoln Park. We cannot drive them to

students who live more than 1.5 miles away or within designated boundaries.

But magnet cluster programs, like Mayer’s, do not offer busing and are

meant to provide educational options primarily for students in the community.

You might choose a magnet cluster program in your neighborhood, but you still

are responsible for your siblings’ transportation. CPS has no plans to increase

busing because of the cost, says a district spokesman.

Since 1995, Chicago Public Schools has raised

property taxes by 31.2%, far more than other local taxing bodies,

according to a report by the Civic Federation, a non-partisan research group

the Chicago Park District by 10.8%; the City of Chicago by

district’s $250 million deficit was due to salary and