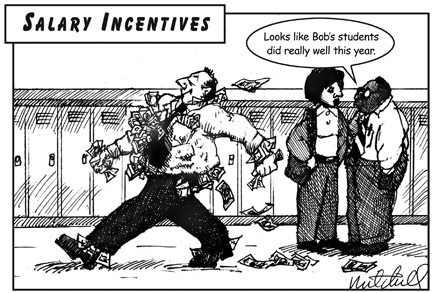 Chicago Public Schools will spend $28 million to switch to Internet-based phone service. CPS officials say the switch will reduce operation costs and phone bills. The new technology uses one network for both voice and data traffic. Public safety authorities will be able to find the precise location of a call in an emergency and the system will provide teachers with voice mail and caller ID, with the goal of increasing parent-teacher communication. The switch will take four years to complete.

Chicago Police Department data show that student arrests fell to 7,400 in 2006, compared to 8,500 in 2005. Most of the decline was due to a reduction in the number of students charged with simple battery, an offense that schools have wide discretion to handle on their own without calling police. Last year, the high number of arrests sparked controversy and prompted the district to clarify its discipline code in an effort to reduce arrests. More police were stationed near schools with the most severe gang problems.

The School Board approves 17 new schools in its third round of Renaissance 2010. Ten will open next fall and seven will open in 2008. Ten of the 17 are high schools. Collins High, whose closing sparked controversy last year, will become a performance school run by the Academy of Urban School Leadership. Marine Military Math and Science Academy will become the first public Marine Corps-run high school in the country. Two more schools recommended for approval will go before the board in December.

The number of public schools on the state’s list of low performers rises to 52 from four, following the introduction of a tougher rating system, according to the Nov. 2 Charlotte Observer. Just 64 schools earned top ratings this year compared with 496 in 2005, and only 54 percent of schools qualified for teacher bonuses based on achievement, down from 69 percent a year ago. The state also revised 3rd- through 8th-grade math tests, making them more difficult. Parents were still awaiting reports of the math test results.

Newly elected Board of Education President Robert C. Bobb vows to fight a mayoral takeover of the school system, according to the Nov. 9 Washington Post. Bobb, a former city administrator, said he will release detailed plans for raising achievement by January. Bobb said a “leadership vacuum” on the board had opened up the possibility of a takeover. New Mayor Adrian Fenty has said he wants to appoint all members of the board and make it an advisory panel.

Delaware will take part in a federal pilot program allowing it to use a value-added model of student test score growth to measure progress toward No Child Left Behind achievement goals, according to the Nov. 10 New Castle-Wilmington News Journal. The pilot was announced last year. Five states have been chosen so far, and up to 10 states will be approved this year.

“I’m amazed at the number of people who think getting a ‘D’ is OK.”

Preschool for All isn’t for everyone just yet. The legislature approved $45 million this year to serve an additional 10,000 youngsters. But it will need to allocate an additional $180 million annually to serve all interested families, according to Jerry Stermer, president of Voices for Illinois Children.

Gradual increases in funding over the next five years will open up more spaces for middle-income families and then for families in higher income brackets, Stermer explains. For now, preschool operators are giving preference to the neediest students. Chicago Public Schools gives preference to children who are the most academically at-risk, based on a mandatory screening test, but does not consider family income.

You can arrange for a screening at a nearby public school. Regional state preschool offices can help you locate CPS programs with available spaces. Call (773) 534-3846 if you live north of the Eisenhower Expressway or (773) 535-8688 if you live south. In Cook County, call Illinois Action for Children at (312) 823-1100 to find a state-funded preschool program near you.

Illinois is one of 13 states to receive a grade of “D” or lower in a recent report that examines the progress states are making in closing the achievement gap for low-income African-American and Hispanic students. Illinois is one of 13 states that made no progress in closing the gap, according to the report by the Thomas B. Fordham Foundation. The report relies on several indicators to rank states, including scores on the National Assessment of Educational Progress for 1992 through 2005.