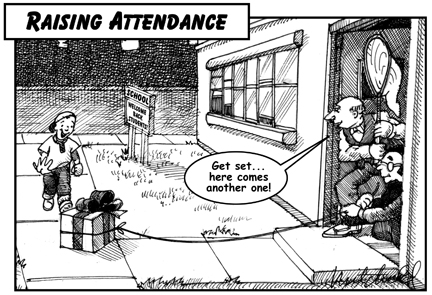 Almost 385,000 CPS students attend the first day of school, a record 93 percent attendance rate, up from 92 percent last year. The district says that first-day attendance has risen 17 percentage points since 2000, boosting state aid. Officials also announce another round of attendance incentives. The year also begins with 14 new schools under Renaissance 2010; new English, math and science curricula at 15 high schools; and 107 new principals, the largest number of newcomers ever.

Using $17 million in new funding from the state, CPS will provide preschool slots for 2,500 additional children this year, including 700 3- and 4-year-olds in public schools and 1,800 youngsters in community-based preschools. Many of the new slots will be created in predominantly Latino schools. Some schools will add a third shift of classes to accommodate more students. The grant, from the new Preschool for All initiative, will also be used to improve community-based infant and toddler programs.

Illinois unveils a list of 172 skills that kindergarteners should learn to do. The state has had similar lists of specific goals for grades l through 12, but nothing for kindergarten until now. The list covers language arts, math, science, social science, physical development and health, fine arts, foreign language and social/emotional development. One example: in language arts, children should be able to read simple, common words; in math, they should be able to estimate numbers of objects in a group.

A new state law gives Mayor Antonio Villaraigosa substantial control over the Los Angeles Unified School District, according to the Sept. 19 Los Angeles Times. Villaraigosa will be a member of a council comprised of local mayors (L.A. includes a number of municipalities) that will oversee the district’s budget and hire and fire the superintendent. He will also have direct control of three high schools and their feeder schools. The School Board plans to challenge the law.

Republican Gov. Robert Ehrlich Jr. plans to institute a teacher incentive pay program if he is reelected in November, reports the Sept. 5 Baltimore Sun. Officials say the program would be modeled after one adopted in Minnesota, which is voluntary and lets school districts design their own pay scales. The Maryland State Teachers Association opposes the plan. Ehrlich faces Baltimore Mayor Martin O’Malley, a Democrat who opposes incentive pay and says he supports giving all teachers competitive salaries and benefits.

To increase Tennessee’s high school graduation rate, Gov. Phil Bredesen has proposed a plan that includes free tuition at community colleges for graduates who score at least 19 on the ACT test, reports the Sept. 13 Memphis Commercial Appeal. The plan also includes assigning a truancy officer to each high school and developing individualized learning plans for every incoming freshman.

“The only reason I have only one [class] not at the maximum is because seven kids haven’t shown up.”

Social studies teacher Victor Harbison to Catalyst staff on overcrowding at Gage Park High, where Interim Principal Martin McGreal was fired for refusing a board directive to enroll additional students. Five of Harbison’s missing students have since shown up, putting all of his classes over class size limits.

I’m a physical education teacher at two CPS schools with limited equipment and money. My students need exposure to a variety of activities to keep them fit. Are there grants that might help?

Yes. You can apply for a grant of up to $6,000 from the Illinois Association for Health, Physical Education, Recreation and Dance. Recipients have used the money to buy a variety of indoor and outdoor equipment, says David Thomas, a professor in the School of Kinesiology & Recreation at Illinois State University in Normal, who helps select the grant winners. Most applicants get some money, though Thomas says “it may not be all they want.” The only catch: You must join the association, at a cost of $45. (See www.iahperd.org) In addition, any teacher can solicit small donations for special projects at www.donorschoose.org or research grant opportunities at the Donors Forum of Chicago (www.donorsforum.org). The district received funding from the U.S. Department of Education through the physical education program grant initiative during the last two fiscal years, but was turned down this year, says Alyson Cooke, CPS director of external resources. According to the Dept. of Education website, funding for the program was cut.