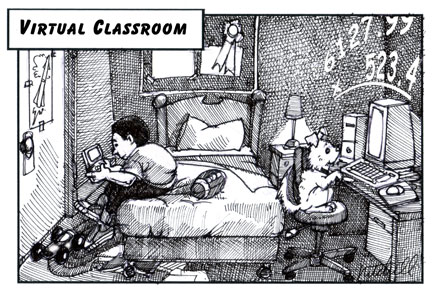 An additional 13,000 students will get after-school tutoring, and racially isolated schools will get more classroom staff, under an agreement between the district and the federal government over desegregation spending. CPS will set aside another $8.5 million for tutoring and $1.5 million to hire aides and teachers. Most of the money will come from federal grants. The district has been under a desegregation consent decree for over two decades. A hearing on whether to release the district from the decree is set for next year.

The district announces plans to borrow an additional $75 million for capital projects, bringing the 2006 capital budget to $325 million. But board President Michael Scott won’t specify which capital projects will benefit, saying “we have 600 schools and a lot of needs.” This past spring, cuts were announced in the capital improvement budget after the state cut $110 million in funds, putting a number of school additions and new construction projects on hold. The 2005 capital budget for new projects was initially $369 million.

A school modeled after a parochial school and an online school are among the Renaissance 2010 proposals accepted by CPS. Providence-Englewood, modeled after Providence-St. Mel, will require some students to take admissions tests, and parents to attend workshops. It is slated to take over the shuttered Bunche Elementary building at 65th Street and Ashland. The company that will run the online school was co-founded by William Bennett, the former U.S. education secretary who recently came under fire for making racially insensitive remarks.

A new teacher evaluation program that requires most teachers to put together portfolios of their work and submit to more classroom visits is getting mixed reviews, according to the Nov. 5 Des Moines Register. Some teachers applaud the idea, but others say the program—especially the portfolios, which must document how a teacher’s instruction meets learning standards—just creates more work without raising pay. The program was originally supposed to include salary increases tied to better performance.

A group of educators and city officials plan to file a lawsuit to force the state to overhaul school funding based on an “adequacy formula” that accounts for different needs among children, according to the Nov. 7 Hartford Courant. Since 1989, the state’s share of education spending has declined to about 38 percent, down from almost 46 percent. The Connecticut Coalition for Justice in Education Funding commissioned a study that found 145 out of 166 districts fell short of funding needed to bring achievement up to standards set by the federal No Child Left Behind law.

The state is considering requiring high school students to show foreign-language proficiency in order to graduate, according to the Nov. 1 Lexington Herald-Leader. The plan would include testing to determine how well students speak, read and write a foreign language. The state Board of Education is expected to vote on the proposal in December and implement it by 2010. Illinois does not have such a requirement, but Chicago Public Schools students must earn two credits in a foreign language to graduate.

“School has to have a purpose, be a pathway to the future for them.”

Michele Cahill, senior counselor for education policy for The New York City Dept. of Education, on how to help at-risk teens succeed in school. She spoke at a Nov. 2 luncheon co-sponsored by Business and Professional People for the Public Interest and Catalyst Chicago.

I’m interested in the elementary magnet programs. I was told by the Office of Academic Enhancement to go online to find the application. I spent one hour searching the website. Please help.

The most direct route to a magnet application is www.chicagomagnetprograms.org. Applications must be postmarked by Dec. 16th. The main CPS website (www.cps.k12.il.us) also contains numerous links to the magnet schools’ web pages, but as you discovered, they may not be easy to locate. (For instance, look under “School News” in the right hand column, click on “Types of Schools,” scroll down to find “Magnet Schools” and click on the magnet website link.) If you need an application to a regional gifted center, classical school, academic center or International Baccalaureate prep program, call the academic enhancement office at (773) 553-2060. CPS has introduced a new application that, for technical reasons, cannot be downloaded. However, the new applications, which can be read by a computer, should shorten processing time and move up the date for notifying parents of acceptance, to early or mid-March, according to Jack Harnedy, who heads the office.