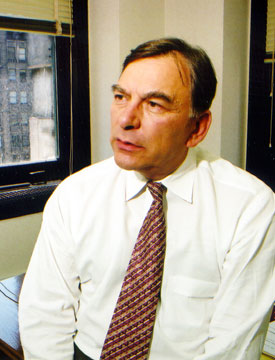 It will take a minor miracle to make statewide school funding reform a reality, says David Vitale, who presides over the distribution of $5 billion in resources to schools. Just a week before CPS released its 2006 budget, Vitale explained the district’s rationale for recent budget policy changes to Editor Veronica Anderson.

Being the best urban school district in the United States. I believe we can do that. We have many advantages that a lot of school districts don’t, one being a supportive board. Union relationships are always challenging, but we have a contract and relationship that probably is not as bad as other places. I’ve been building a foundation to fundamentally transform the way the district works.

Instead of allocating resources by negotiation, you allocate them by policy and effort. Resources are allocated to schools through a series of formulas. But some schools have figured out how to manipulate [the system]. Formulas have to really mean something. Now, when schools come in to get more of this or that, what I’ve said is, ‘If there are enough schools like yours, then come in as a group and justify a new formula.’ But I’m not going to deal with this on a school-by-school basis.

Isn’t that part of being a good leader, knowing how to get resources for your school?

It may be, but it’s a waste of time. Leaders ought to know that the allocation of resources is fair and equitable. They should spend their time trying to figure out how to improve education and manage their faculty. They shouldn’t have to scrounge for the resources.

So what kind of reaction are you getting?

We had a fair amount of challenges last year because some elementary schools had gotten more resources in the past. They didn’t like it that they weren’t going to get an extra share. Some other schools made out better, but you never hear from them.

You made some budget formula changes this year and had to relent—for instance, allowing preschoolers to continue being counted in poverty funding.

We did try to soften the blow because our mistake had created expectations that shouldn’t have been there. We were doing something that was not consistent with state regulations. The state said, ‘Fix it,’ so we did. [But] it’s not fair to do that in one year.

What about the decision to redistribute federal Title 1 money in favor of schools with fewer poor students?

The previous scale concentrated those funds in a small number of schools. Now they are spread as broadly as possible. If we could, we would have spread it even more. People can argue about whether that’s right or wrong.

Isn’t the minimum funding program a remnant of allocation by negotiation?

Is it going away?

Over time. We can’t get everything done at once. The word is out there that nobody’s getting more than their fair share. A group came down to a board meeting and went to the mayor’s office asking for more money to keep counselors and librarians who were getting cut. The answer was no. I told them to stop asking for this stuff when I have other schools that don’t know how to ask and need it more than you do.

Some observers say you make decisions first, then look for buy-in—with per-pupil funding, for instance. Is that the right way to go?

Do we need a lot of public decision-making about replacing lug nuts? I don’t think so.

Right, but you’re in a position now of having to sell people on per-pupil funding.

You’re always in a position of having to sell people.