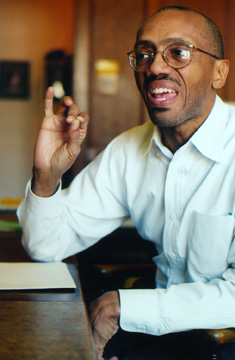 Phillip Jackson is a walking warehouse of statistics on the academic achievement gap between black and white students. “Most parents know it exists, but they don’t know the true extent of it,” says Jackson, one-time deputy chief of staff under former Schools CEO Paul Vallas and founder of the Black Star Project, a parent-involvement initiative. Jackson is engaged in what he calls a “shock and awe campaign” to jolt minority parents into becoming more active in their children’s education.

He spoke with Consulting Editor Lorraine Forte about the roles of parents and schools in teaching children and the impact of the 1954 U.S. Supreme Court decision in Brown vs. Topeka Board of Education to desegregate schools.

When you talk about parent involvement, what do you mean?

We’re talking about not simply making parents the first, best and most important teachers [of their children], but also making parents the ones who create and maintain educational standards. … Right now, especially for black and for Latino parents, other people are creating those standards and those standards are not very high, and, in fact, they’re very, very low. The only people who are going to create high standards and maintain high standards for black children [are] black parents.

How do you help parents to know, ‘This is what my kids should learn. Maybe I didn’t go to college, but these are the standards?’

It is untrue that you have to have gone to college before you can set high standards for your child’s education. … That’s something that not only schools [say], many parents believe it. … We’ve got forums, we’ve got charts, we give parents the information they need to take into the schools and to let the schools know, these are the standards that we want you to teach our children.

How do you suggest that parents work with schools to make sure that they have enough resources, that teachers have the right expectations, that the principal is doing his or her job?

I would say a massive infusion of parental involvement at all levels of the educational system, at the governance level, at the grassroots level, at the field trip level, at the report card pickup level. … We think that parents should make it a point to personally make contact with each and every one of their children’s teachers all the way through college.

Why do you think black parents, Hispanic parents are not more involved in their children’s education?

Especially after Brown vs. Topeka Board of Education, black parents gave up the ghost. They said, the game is over, we have won, now our children must be educated like all other children. And what we are finding now is that today, in the year 2004, many black children were better educated before Brown than after. … I am not speaking against integration. In fact, in the world today, integration is a must. … I am saying that young people, especially the young black men, coming out of high schools today are no more equipped to succeed in this modern technological society than the man in the moon. … They can’t read. They can’t do math. They can’t use computers. They’re not articulate. Nobody’s going to hire them.

Is there anything else that you want to say about the role that schools should play or what parents need to do to work with schools?