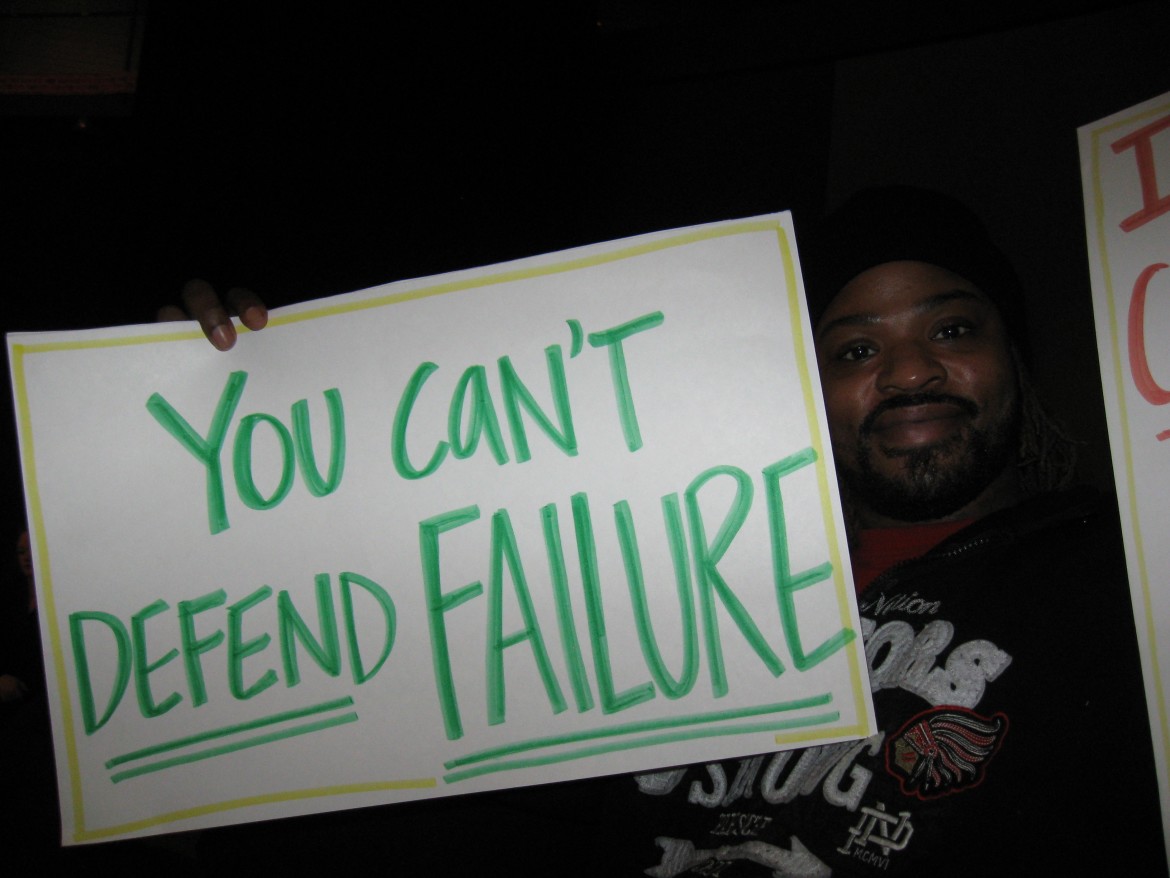 Supporters of closing Crane High School and other schools showed up at the first community hearing on the issue, spurring accusations that they were paid lackeys of the mayor.

Opponents of the two proposed high school phase-outs came out in force Friday night to the first round of community hearings on school actions. But they weren’t the only ones: They were met with groups of people who support the eventual closure of Crane and Dyett high schools, some of whom were bused in from other communities.

The hearings were two of 10 that took place simultaneously Friday night, spurring some activists and concerned parents to leave one and head to the next one. CPS officials have proposed phasing out Dyett in Washington Park and Crane on the West Side, and closing Price and Guggenheim elementary schools. Six other schools will either finalize a phase-out or will begin sharing a building with a new school.

A second round of community hearings will take place on January 20. Public hearings at CPS board headquarters will be held during the last week of January.

In addition, CPS officials have proposed turning around 10 schools. Hearings for the turnarounds will only be held at the board office. Final decisions on school actions will be made at the February board meeting. (see the entire schedule here: http://www.cps.edu/About_CPS/Policies_and_guidelines/Pages/2011TransitionPlans.aspx)

Paid to show up?
On both sides, there were accusations that audience members were being paid and one supporter of the closings said he and others were given a $25 stipend.

Odell Thomas said CEDA helped him get to the Crane hearing and that the group bused 400 Englewood residents to the different hearings. “If the children aren’t benefiting from the teaching, why should you keep the school open? You might as well close it,” he said.

“I just wonder why they wouldn’t want it shut down,” Thomas added. “I believe it’s just for the money.”

But the fact that yellow school buses brought some of those supporting the phase-out drew ire among the crowd. When they left, people in the audience shouted, “Rahm Emanuel’s bus is leaving.”

The people at the meeting opposing the closings outnumbered those supporting them. At the Crane meeting, a number of elected officials were on hand to express their displeasure at the plans, including Ald. Bob Fioretti, Ald. Walter Burnett, and State Sen. Annazette Collins.

Former alderman Ed Smith, who had battled school actions when in office, urged the parents to mount an all-hands-on-deck effort to save the school, and even led them in chanting. “I don’t care who is telling you that this school has to go,” he said.

After CPS officials made their case for the phasing out the high schools, which they say need to be shut down after more than a decade of poor performance, opponents got their say.

At Crane, opponents came with a presentation of their own and insisted on putting it in front of officials. Speaker after speaker came to the microphone and said one sentence: “I cannot speak, in all fairness, because the Crane coalition’s presentation was not allowed to be presented tonight,” they said. Then, they stood in silence.

After a few rounds, officials left with a representative from the group to negotiate. When word came that the presentation would be allowed, five speakers yielded their time to allow it 10 minutes.

Aston Coleman, the school’s dean, cited a University of Chicago Consortium on School Research report finding that school achievement dips in the year before a closure. Also, few students from the closed school end up at a higher performing school, according to the study.

Coleman also said Crane is actually performing better than the raw test scores indicate. If ACT scores did not include students from the school’s achievement academy, which serves students who have been held back and come to the school as over-aged 8th graders, they would be a point better, 15 out of 36. Most colleges that are minimally selective look for an ACT score of at least 18.

Coleman also noted that students’ test scores increase 3.1 points from the time they enter the school until they take the ACT – a figure identical to the citywide high school average.

In comparison, he said, other West Side high schools don’t do as well. “When our Crane students come in, we do a darn good job of growing them,” he said.

He also placed blame for the school’s problems squarely on program cuts, the mandated High School Transformation curriculum, and on leadership instability – which has included three area and network office reorganizations since 2007, as well as five different area officers overseeing the school in recent years.

That’s common at neighborhood high schools, which have seen one reform initiative after another implemented, often to have the district reverse course just a year or two in.

Across town on the South Side, Dyett student Chanavia Rieggs spoke in defense of her school and told CPS officials of her concerns about students from her neighborhood traveling to Phillips. Among other officials, CPS Board President David Vitale was on hand to listen.

Chanavia said she would worry about students from her school heading to Phillips which also has a gang problem.

Chanavia’s mother, Kitesha Rieggs, added that two of her children, including Chanavia, got a good education at Dyett. Her son is in college with scholarships and she expects Chanavia to follow him there.

Rieggs noted what others have pointed out. Phillips High School is a level 3 school–the lowest rating CPS assigns–as is Dyett. Questioned about this on WBEZ’s call-in show Schools On The Line, Jean-Claude Brizard said that Phillips is on an upward trajectory. Phillips also is a turnaround school run by the not-for-profit Academy for Urban School Leadership.

“I think they should put the resources into Dyett,” Kitesha Rieggs said. “I guarantee these students would do excellent.”

Sarah Karp contributed to this story.