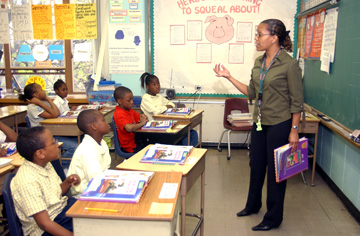 Beethoven Elementary is a well-run school that is unusually resourceful in attracting extra supports.

Even so, some of its students fail to make it through the School Board’s promotion gate.

Repeating a grade gives some kids enough time to catch up while others continue to struggle. In the following examples, the children’s names have been changed to protect their privacy.

When Joseph transferred to Beethoven in fall 2002, his file contained a note from his 2nd-grade teacher listing seven incidents of poor behavior, including refusing to line up in the hallway and showing off his underwear to the girls.

During his first weeks at Beethoven, it was more of the same. “He would hit and play and run,” recalls Caroline Dunlap, Joseph’s 3rd-grade teacher that year. And he could barely read or write, she says.

But now Joseph is at a 3rd-grade reading level, his teacher reports and will likely make the cutoff scores for promotion to 4th grade. Teachers attribute his progress to personal attention, high expectations and a behavior modification program called Phases that Beethoven is piloting.

Dunlap referred Joseph to Phases soon after he enrolled at Beethoven. The program is aimed at helping students who have mild behavior problems interact better with their peers. Trained parent instructors hold weekly discussions for groups of three to five students. Often the instructor will present a story about a conflict—a boy disrupts a jump rope game, one girl hits another—that the students must figure out how to resolve. Instructors also visit children in their classrooms to monitor and redirect their behavior.

Dunlap says she also let Joseph know that unruly behavior wouldn’t be tolerated in her classroom. At the same time, she assured him she would do all she could to help him succeed. She started by inviting him to a small-group tutoring session she offered on her own time before school. “It wasn’t overnight, but his behavior changed,” she says.

By the end of the year, Joseph had made progress but not enough to hit the mark for promotion to 4th grade. Summer school didn’t get him there either.

For his second year in 3rd grade, he moved across the hall to Dona Maldonado’s class, and some of his behavior problems resurfaced. So his teacher had him resume the Phases program.

On a morning in mid-March, Charlene Cowans, a Phases instructor, visits Maldonado’s morning reading lesson to monitor Joseph and two other boys. Cowans passes by Joseph’s desk frequently to remind him to pay attention, to stop drumming on his desk, to put his drawing away and to answer Maldonado’s question about a new vocabulary word.

By the time Maldonado asks students to write a response to their textbook reading, Joseph is slumped in his seat, shredding a scrap of paper in his desk. Cowans lifts him gently out of his seat and guides him into the hallway. “You know you can be better than what you’re doing,” she tells him softly. “You need to straighten up.”

Joseph nods at the floor, and she leads him back to his desk. With Cowans standing over him, he begins to write, slowly. After a few minutes, he picks up speed. By the end of the reading period, he has written the longest response, a full page in small, neat print, explaining his prediction with “transition words” like “first,” “second” and “finally.”

“He’s turned around a lot,” Maldonado remarks. When he misbehaves or has a bad day, she often calls on Cowans, Dunlap, or the boy’s grandfather, she adds. “He has a feeling that we’re all working together, and we’re all watching him.”

Suzanne transferred to Beethoven last fall as a retained 3rd-grader from a neighboring elementary school that had been closed for poor test scores and low enrollment. Given the girl’s age, she likely either started school late or is on her second retention, says her teacher, Deborah Simpson. But Simpson is unsure because Suzanne’s school records have not yet arrived at Beethoven from central office.

Suzanne is enthusiastic about school and pays attention, but she rarely does homework. She also has erratic attendance—100 percent one month, 50 percent the next.

One afternoon in March, Simpson previews the math homework during the last half hour of the after-school program. She questions the students at length, using multiple examples to ensure they understand the steps and vocabulary they will need to complete it. Suzanne is among the most active participants.

“What do you call shapes that are the same size and same shape?” Simpson asks.

“Ooooo!” cries Suzanne, waving her hand wildly. “Congruent!” she cries out when Simpson calls on her.

But when Suzanne returns the next morning, she hasn’t attempted either worksheet.

Simpson says that when she asks Suzanne and her younger brother about why they don’t complete homework, they say they don’t get any help.

Simpson has little contact with the children’s mother—the family does not have a phone so messages must be relayed through a friend who does. (Of her 22 students, only eight have parents who are easily contacted by phone, she reports.)

In the late 1990s, Beethoven had parent attendance officers who made home visits, but the board cut funding for those positions, says Principal Dyrice Garner.

Simpson knows little about Suzanne’s family but speculates that the mother may work late afternoons and evenings, which has become common since welfare reform, she says.

Of Simpson’s 22 students, only about 12 complete their homework regularly, she says, and they easily outperform the rest of the class. “It makes a big difference.”

John entered 3rd grade in 2002-03 with very low reading and math skills and had great difficulty focusing on his schoolwork. He was very immature and playful, recalls Deborah Simpson, his teacher.

Mid-year, she referred him for a special education evaluation, which found that he needed glasses. By then, it was too late for him to catch up, so he repeated 3rd grade.

Even with glasses, he continues to have difficulty. During whole-class instruction, Dunlap positions herself near John and a handful of other struggling students so she can closely monitor their work.

When she’s near him, John pays attention, answers questions and happily completes his class work.

But as soon as she steps away, he’s out of his seat or playing at his desk or arguing with the child next to him.

In the meantime, Dunlap gives him as much personal attention as she can. Monday through Thursday, she tutors John and up to four other boys for an hour, following the after-school program. On a recent day, she couldn’t stay late. “They were so upset. ‘We staying? We staying?'” they kept asking her, she says.

Even with the extra help, John’s inability to work unsupervised likely will prevent him from meeting the cutoff scores for promotion once again, Dunlap believes. Under a new board policy prohibiting double retentions, he will pass into the 4th grade after completing summer school. “He’s not doing acceptable work for 3rd grade. It [won’t] get easier as he gets older,” she says.