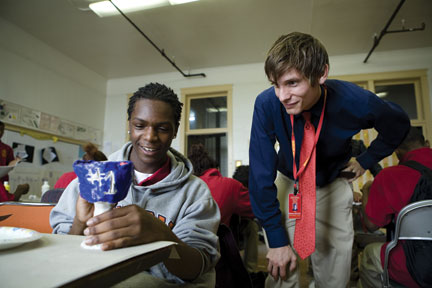 During her senior year, Ashley Bond stopped attending classes for nearly two months.  She didn’t care, because it seemed to her like nobody else did.  At home, she says, she had a strained relationship with her foster mother; at Morgan Park High School, the large classes of 30 students made her feel like just another face in a crowd.

But then a mentor urged her to transfer to Bronzeville Alternative Academic Center, now known as Innovations High School. Once enrolled, Bond hardly missed a day. She joined the student council and became active on the prom committee.

The difference? “The teachers knew your name,” says Bond, 21. “If you needed help, they were willing to help you and stay after school or come in early in the morning before class started. I had a connection with the school.”

Bond graduated in May 2007, and went on to earn a certificate in the medical assistant program at the Illinois School of Health Careers the next year. She still comes back to Innovations, to volunteer with cleaning and remodeling projects and to use the computers in the career center.

Like its students, Innovations High School has transformed itself after being given a second chance.  The campus was founded in 1997 as a GED completion program, serving up to 30 students at a time. In 2000, it became a high school. But just two years later, the school was put on probation by Youth Connections Charter, which operates Innovations and 21 other alternative schools in the CPS system.

LaShaun Jackson, who was hired as a consultant to help turn the school around, recalls that the staff seemed overwhelmed, and most teachers were not certified. Students freely roamed the hallways during class, and even simple files were in disarray. The principal was asked to leave. His replacement left soon, too.

Jackson took over, and in 2004 was officially named the school’s director. He had never headed a school before, but had experience working with troubled youth—as a caseworker for the Youth Service Project in Humboldt Park and as a supervisor for Pathways Independent Living Services, which helps kids who are wards of the state. Shortly after taking over the school, Jackson gave all the staff the choice of reapplying for their jobs or leaving. Nobody stayed.

Since then, Innovations has made strides. The school has a waiting list of 30-40 students, and is one of the higher-performing schools in the Youth Connections network. Under the CPS contract with the charter, at least 60 percent of students should raise their reading and math skills one grade level during the school year. At Innovations, 93 percent of students moved up at least one grade level in reading, and 89 percent moved up in math, according to data from Youth Connections.

The school has an admissions policy—students must have earned at least 6 credits, submit a letter of recommendation, go through an interview process and meet minimum academic benchmarks—and Jackson concedes that part of the school’s success could be attributed to this initial screening.

Still, the most important factor “The biggest thing is engagement,” Jackson notes. “We have enough time and enough staff to know each student and can establish a relationship with them. That stops the gang fights and stops the riff- raff.”

Based on the numbers, most of the 150 students at Innovations would have had little chance of graduating from their previous schools. The average reading level of incoming students, who range in age from 16 to 21, is at 7th grade, according to school officials. For math, it’s just above 6th grade. About 80 percent were in danger of failing a grade or had already dropped out. About 40 percent had violent incidents on their discipline records. Students claim membership in at least six different gangs. An estimated 35 percent are teen parents.

Jackson says the stability and quality of the staff, and the small, inclusive community that’s been created, are key to the turnaround. The school’s nine teachers and instructors are all certified and have been with the school for at least three years. Teachers work closely with the school’s seven paid mentors to track student progress. The entire staff meets twice a month, and administrators meet with staff twice a month as well, “so they understand the philosophy of engagement,” Jackson says.

Each student is assigned to a mentor, who usually meets with the student at least once a week to help them with schoolwork or counsel them on behavioral issues. If a student acts up in class or refuses to do work, teachers will send him or her to a mentor rather than to an administrator.

The mentors also help students apply to college and take them to cultural events and recreational activities. “Part of our mission is to develop the social skills of the student, so that they can socialize better in the professional world,” Jackson says. Many students have little exposure to anything outside their community, he adds. “They rarely leave their neighborhood.”

Jackson makes it a point to meet each student individually when they arrive. He’s the one who takes their photos for their name badges and hands out burgundy polo shirts, the school uniform.

Even though the students might initially act otherwise, “they want and need authority figures,” Jackson says. “Somebody here has to connect with them. That’s crucial for the student to become engaged and stay in school.”

Science teacher David Ashkenaz says his students aren’t much different from those that he taught previously at two other Chicago public high schools. But there’s a big difference: Smaller classes that allow him to interact with students and create engaging lessons.

Ashkenaz took a pay cut when he left CPS, but he’s stayed for four years at Innovations because of the school climate and the close relationships with colleagues.

“We work together, all of us, hand in hand, as a unit,” Ashkenaz says. Research has found that teachers often prize better working conditions over higher pay.

Ashkenaz has just three classes of 15 to 20 students each, which meet for as long as an hour and a half on most days. At the CPS high schools where he taught, he had five classes of 30 students each, with class periods of less than an hour.  Ashkenaz spends less time lecturing now, and more time helping students with hands-on science experiments.

Personalized teaching makes students less likely to act up or cut class, he notes. And when they do, he has the time to help them.

He recalls an intervention that staff held for one student who always came to school late.

They met with the student and his parent, and worked out a schedule so that a teacher could work with the young man individually for an extra half-hour each day. “We cared, and he saw that we cared,” Ashkenaz says. “We weren’t going to let him fall behind.”

“Once they feel possession of their own learning, they want to do their best,” he adds.

Keydra Williams, who graduated this year, came to Innovations after struggling at King College Prep High School, where she missed so many classes that she wouldn’t be able to graduate on time.  She was initially apprehensive about the transfer, fearing that as an alternative school, Innovations would be too easy academically and her fellow students would be violent and disruptive.

She quickly realized that her worries were unfounded.  “They didn’t accept D’s. The motto is higher standards,” Williams says. “They talked about college as if that’s what you’re supposed to do.” Williams is now a freshman at Southern Illinois University in Carbondale.

Recently, she e-mailed Ashkenaz, or “Mr. Ash,” to tell him that she received a nearly perfect score on a zoology exam because so much of it was a review of what she had learned in his class.

As Innovations grows, Jackson says the continual challenge will be adding ways to improve student performance. For the past two years, the school has joined with Chicago Arts Partnerships in Education to help train its teachers on how to integrate the arts into English and history classes. Two math tutors were hired this year because student gains in math were not as strong as reading.

But despite the progress at Innovations, the stability isn’t a given. This spring, Blue Gargoyle, a nonprofit neighborhood agency that had provided administrative services to the school, unexpectedly shut down. Instead of walking away, Jackson scrambled to form a new nonprofit, Circle Foundation, to support the school.  “I feel like I’m on a mission,” he says. “To see a gang member change, and to see a student go from that to graduating–that’s worth more than anything.”

The foundation, which operates similar to a board of directors for the school, is responsible for duties such as hiring staff, maintaining the facility and buying the school’s insurance.

On a recent morning, a group of students sat at long tables, trying to shape wet clay with their fingers.  The U.S. history class had been studying Native American culture, and now the students were attempting to make their own pottery. Teacher Matt Wehrmann walked around the room, quizzing the students on the type of pottery associated with various tribes.

A few students grumbled as they squeezed the clay. “It’s going to take all day to make this soft,” one boy said.

Wehrmann encouraged them: “The first few minutes are the hardest. It’ll get better.” By the end of the class, several of the students were so engrossed in their work that they didn’t want to leave.