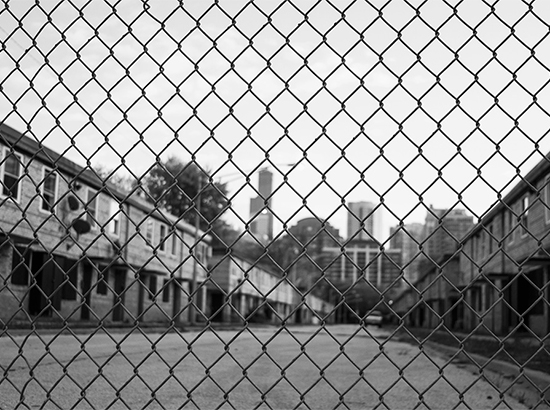 The Chicago Housing Authority demolished the last Cabrini-Green high-rise in 2011, and all that remained of the vast public housing complex were the Frances Cabrini Rowhouses. The CHA had plans to renovate the units for displaced residents, but most of the rowhouses are still boarded up and fenced off. [Photo by Sophia Nahli Allison]

Housing activists were back at City Hall this morning calling for more aldermanic oversight of the Chicago Housing Authority amid a new report that found the agency has squirreled away $432 million in federal money during the past five years that was intended to help low-income renters.

The CHA’s surplus is just one of many issues that have drawn scrutiny to the way public housing functions in Chicago. As the Chicago Tribune put it in an editorial last December, “The Chicago Housing Authority has had nothing but trouble in recent years.” Those troubles include falling behind on replacing thousands of units, many of which were torn down more than a decade ago when the Plan for Transformation was in its infancy. Hundreds more units are sitting vacant — awaiting rehab or demolition.

The voucher program was supposed to offer families more options over now-shuttered high-rises. However, for many, the program hasn’t been the bridge to safer neighborhoods with jobs and high-functioning schools it was supposed to be. Our analysis found that, in recent years, only $1 of every $10 in rent money is spent in what are called “opportunity” areas. Still, the tens-of-thousands who flock to the waitlist (when it sporadically opens) make it clear that they’ll take the subsidy even if the odds are pretty high that they’ll end up in a distressed neighborhood in units that are substandard or in foreclosure.

Thousands more could have been plucked from the waitlist if the CHA had spent the federal money on vouchers, a pattern that authors from The Center for Tax and Budget Accountability, a Chicago-based, liberal fiscal watchdog group, call “troublesome.” By their count, more than 10,000 vouchers have gone unclaimed over each of the past five years at the same time the waitlist swelled and the nation fell into recession.

Calls for more City Council oversight of the agency have been brewing for months now. And the report is yet more fodder for housing activists who’ve made the case that aldermen should have some control over building new housing, addressing vacancies, distributing vouchers and that ever-growing reserve. Only a handful of aldermen have signed on so far.

Among the early supporters is Ald. Howard Brookins Jr. (21st Ward). “[The Plan for Transformation] has affected us all,” he said. “Everything that happens in the city of Chicago, the aldermen and the mayor get blamed for it.” He’d at least like some say over how the decisions are made.

The pressure just may be getting the CHA’s attention. The agency’s CEO Michael Merchant is appointed by the mayor, who has ultimate control over the agency. He issued a statement yesterday affirming the “need for immediate housing assistance that vouchers can provide.

“Due to the great housing needs that exist, right here, today,” he added, “I have elected to make more vouchers immediately available.”

On Thursday, Leah Levinger, an affordable housing activist and director of the Chicago Housing Initiative, which commissioned the report, is meeting with the mayor to talk about the money her organization says the CHA is “hoarding.”

However, she thinks the public’s best hope at having a say over how the CHA spends down its ever-growing reserves is bringing aldermen into the mix.

“The mayor’s office controls CHA,” she said, “but we have a better shot at holding aldermen accountable than the mayor.”

is a staff reporter at The Chicago Reporter.