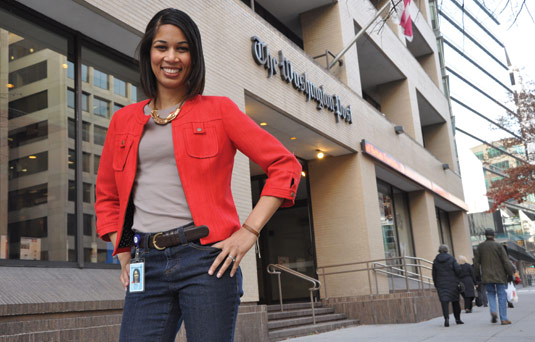 Kimbriell Kelly joined The Chicago Reporter in 2004 as a Robert R. McCormick Tribune Minority Fellow in Urban Journalism. Her 2007 story on mortgage lending practices eventually led to multimillion-dollar settlements between the State of Illinois and two of the country’s major lending forces: Countrywide Financial Corporation and Wells Fargo and Company. During Kelly’s eight years at the Reporter, she moved up the ladder and became the editor and publisher in 2012. Kelly left in November to join The Washington Post’s investigative team.

What was the main focus of your time as the editor and publisher?

The main focus of my time had been on the digital plan. Fortunately or unfortunately, depending on how you look at it, I became the publisher in a time when journalism was changing dramatically, and magazines were abandoning the print format, and newspapers were closing their doors–which is something 10 or 20 years ago I never would have imagined.

I think the exciting part about that is I got to be part of a group of people who try to figure out how you survive during that time, and coming up with the digital plan was part of that. It’s been very exciting. It’s kind of like a Rubik’s Cube. You know what the answer might look like, you know what the colors are supposed to line up and be the same, and all the boxes are supposed to line up accordingly, but at some point, you look at it, and it looks like a mess, and you’re trying to figure out, “How do I get this to work?”

How do you see the photojournalism fellowship you created play into this?

It was part of the digital plan. The Medill [School of Journalism at Northwestern University] came up with a list of recommendations last year, and they said, “You need to have a photographer on staff.” But we couldn’t afford to have a full-time photographer on staffÖ and so I was working with a bunch of people and I’m like, “How can we make this work?”

I thought, “Wouldn’t it be a great idea to hire some students and give them the opportunity to work for this magazine and take great pictures around the city?” We get the benefit of having their ideas and having them share and be part of the team, but then we can give them a little extra money too and help them create a great portfolio–to help them get jobs down the road, whether here or someplace else.

Do you think that the Reporter will stay a print publication in the next 10 years or go entirely digital?

I think that’s too simplistic of a question. I think that supposes that something is black or white. I don’t think that the answer is that simple. I think the Reporter for the last 40 years has been a print publication. I think the focus right now is the Reporter as a publication–not just as a print publication, but expanding on the strength of our print to include more digital content. Going forward, we’re going to have the website, we’re going to have the blogs, we’re going to have multimedia journalism. And we have our e-blasts and we have our PDF copies. That’s five products to mention right there, not to mention we have a radio show and all these other media partnerships. So we are a magazine that publishes on multiple platforms.

Do you think the Reporter has a high enough readership level?

I think it’s easy to get caught up in success as hits and clicks, and reach. Just because you get 2 million clicks, it doesn’t mean, one, that somebody read the story thoroughly or, two, that somebody absorbed or took away something from the story–that they were educated, that they learned, that they grew, that anything changed. All you can show is that somebody visually saw the story.

Compared to the Reporter in the ‘70s, do you think it still provides the same kind of service to Chicago?

On the macro-level, yes, we do serve the same purpose, because the issue is focusing on the big issues of race and poverty of the day. The issue du jour. I think on the micro-level, we obviously deal with different issues. Although I was reading the first issue a few months ago, and it was interesting–eerily interesting–because the issues they were talking about back then are some of the same issues that we are writing about today. So maybe on a micro-level, we’re writing about the same issues, just maybe in a different way: homicide rates, affordable housing. I think the process of tackling investigations is a lot different now. A lot of it is computer-generated data analysis, but a lot of it is probably shoe-leather reporting around the same issues.

Did you expect your story about discriminatory mortgage lending practices to blow up as big as it did?

Not even close. You don’t expect that kind of thing. People, I think, underestimate us a lot. You know we have a great reputation, but we’re not those million-circulation magazines. So I think, to some regard, some people don’t expect us to have that kind of impact or reach. Then when we do, they’re really excited about it. But our work has been cited in lawsuits–not just this one but other lawsuits and settlements and books and things like this for years–for 40 years.