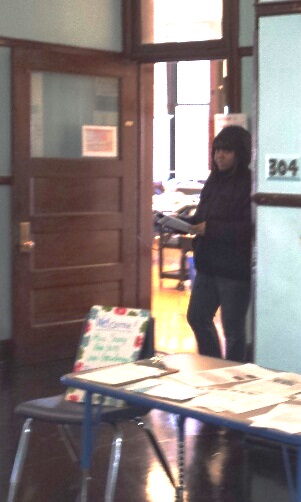 Yvette Tracy picked up her son's report card at Chopin. Her son's teacher transitioned with him from Lafayette.

The difficult battle of finding a good school for children with autism or other severe cognitive disabilities is usually waged behind the scenes, by moms and dads sitting in small conference rooms with social workers and other specialists.

But last fall, some parents were forced to go public after CPS announced the impending shutdown of 49 schools, a third of which had what are called special education cluster programs—special, separate programs for children with serious disabilities.

Students in these cluster programs made up only 4 percent of children in the schools that were set to close. But they were portrayed as the most vulnerable of the displaced students, and two lawsuits charged that special-needs children would be disproportionately hurt by the closings and the trauma of quickly forcing them to leave their schools.  (The lawsuits were eventually dismissed.)

Advocates braced for trouble. But now, these often-vocal critics of CPS say they have not received complaints from parents of children in cluster programs, and are applauding the district’s work to make the transitions seamless.

Still, they say they are still monitoring the situation—and that larger concerns still must be addressed.

“It is not always apparent to parents what is happening or not happening,” says Ashley Fretthold, staff attorney for the children and families practice group at the Legal Assistance Foundation. “Things may not crop up until the next IEP [Individual Education Plan] meeting when they realize that their child is not making progress or not getting the aide they need.”

CPS data shows that 89 percent of students from cluster programs in closed schools enrolled in their designated welcoming school—far more than the 60 percent of non-cluster students who did so. However, students in cluster programs get a change in school placement only if their parents fight for it.

Fretthold and others say bigger concerns still loom: Parents of severely disabled students have little way to tell which programs are good—often they have no access to basic information such as which programs serve children with specific disabilities–and have few options for their child’s schooling. In fact, mere word-of-mouth is a common way for parents to get an idea of program quality.

“Education is the No. 1 topic of discussion,” says Paul Eric Butler, executive director of the Chicagoland Autism Connection, which runs a support group for parents and siblings of disabled students. “It is always a critical issue.”

Butler points out that CPS is not the only district that lacks a rating system for programs that serve students with severe disabilities. It’s a problem across the suburbs and state.

About 6,800 students in CPS are in this category (as measured by whether they are placed in separate classes for most of the school day), according to Illinois State Board of Education 2011-2012 data. About half of these are autistic students, whose ranks have increased by 77 percent in recent years.

Outreach and extra attention to make it work

The district’s targeting of under-utilized schools for closure ended up affecting cluster programs, which were slightly more likely to be in under-used schools. Yet in welcoming schools, space seemed to be an issue. Several principals said they have little to no extra space and would be overcrowded if they were to receive more students.

Markey Winston, the head of special education for CPS, says she and her staff visited every welcoming school taking in students from cluster programs to determine if the space was adequate.

Winston says she and her staff took the transition seriously, holding tele-town halls with parents and conducting outreach to hundreds of families.

“We made sure that if there was a Dyvavox [a communications tool] at school A, it was at school B when the child got there,” she says.

Yvette Tracy, whose son went from Lafayette to Chopin, was worried about the transition and now has two complaints about Chopin. Unlike Lafayette, it doesn’t have a sensory room, a room with special equipment designed for autistic children. Plus, her son’s classroom is small—a “shoebox,” she says. CPS officials say that four schools that were closed had sensory rooms and only two welcoming schools do, but that sensory materials were put into each classroom so the students didn’t miss out on it.

Yet his teacher was hired on at Chopin and the consistency has made it easier for him. “Mrs. Susy kept things normal,” Tracy says.

Principals of welcoming schools did not have a chose as to what teachers they got from the closing schools. Because of the teachers’ contract, the teacher had to qualify and the position had to be open so some schools got cluster teachers and others didn’t. But Fred Williams, the new principal at Chopin, says he was glad to get the Lafayette teacher whose specialty is teaching autistic children.

Williams says CPS’ special education office was attentive and has stayed in touch, asking him regularly what the school needs.

As the official welcoming school, Chopin received an extra $100,000 this year, plus a $3 million renovation.

But 33 cluster students from Lafayette went to Lowell instead—and Lowell didn’t get any additional resources. District officials say that space at Lafayette was a consideration, but also making sure that students could stay together as they progressed through school.

Winston says her office held disability awareness training for students and staff at all the schools that took in cluster programs.

At McCutcheon, Principal Jennifer Ferrell says students read a book and participated in an assembly about understanding differences. McCutcheon received just 24 of Trumbull’s 262 regular education students but more than half of Trumbull’s 88 cluster students. (Some Trumbull parents, worried about the neighborhood around McCutcheon and its reputation, enrolled their children elsewhere.)

While parents have yet to voice any complaints about McCutcheon, the fact that they had no choice about where children would go and lacked information about the quality of the cluster programs still upsets them.

Ratings on the horizon?

During a hearing on the closure of Lafayette, one mother described her dismay about losing a cluster program that had helped her daughter.  At her first school, the girl hid in a corner and wailed. But at Lafayette, the woman said, her daughter’s “world opened up.”

“You can imagine my anger at the idea that you are rocking my kid’s and her friend’s boat by closing these schools,” said the mother, one of many who spoke out at that hearing.

The woman heard about Lafayette from other parents—a common way that families find out about programs, given the lack of a rating system.

At that same hearing, Access Living’s Rod Estvan testified that no empirical evidence existed to prove that Lafayette’s cluster program was any better than others. In fact, the achievement gap between special education and regular education students was virtually the same at both the closing and welcoming schools.

The sole standardized test given to students with the most severe disabilities, called the Alternative Assessment, is not a good measure because it is subjective and too many students do well, Estvan said.

Markey Winston says parents often complain that they want more information about programs. Parents of children with more significant disabilities should be looking for the same indicators that other parents want—evidence of high-quality instruction and high expectations.

But determining what that looks like for children with learning disabilities can be difficult. Winston says that one future task for her office is to help parents better understand how to discern a good special education program

Antoinette Taylor, an Exceptional Needs Consultant, says she is hopeful that in the future some standardized way of differentiating programs will exist. Taylor serves on Illinois’ P-20 Council Family Youth Community Engagement Committee.  She believes that through P-20 committee’s such as the Data, Assessment and Accountability Committee, benchmarks in a longitudinal database will document student transitions as they move through school from Pre-School to Post-Secondary learning environments

Taylor says she is hopeful that this longitudinal data will give parents more information about school performance. Yet she notes it is difficult to marry the subjective measures that parents look for with the need to make sure that students are pushed academically.

“You might have a parent who is upset because they have a child going into 3rd grade who cannot tie their shoes,” she says. “We have to ask ourselves ‘Is that the job of the school?’ Those lines get blurry.”

Furthermore, Taylor says many times parents are more focused on the social and emotional environment than on academic learning. “They want to know that their child is loved and feels safe,” she says. “This becomes more important when your child can’t communicate and tell you, ‘I had a horrible day today.’ ”