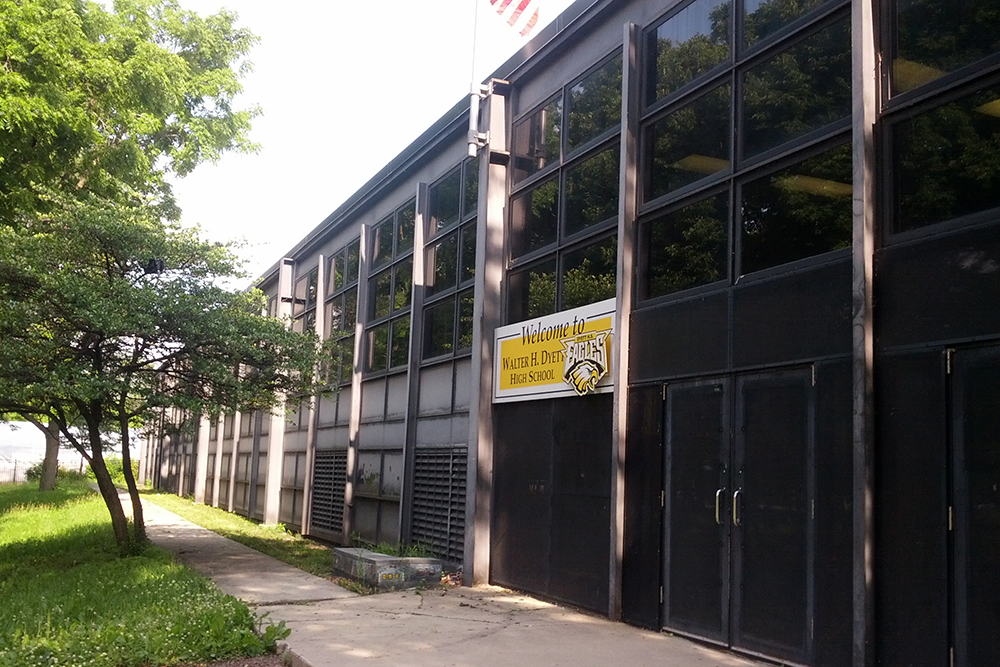 A community coalition says 4th Ward Ald. Will Burns should not get credit for saving Dyett High School in Bronzeville.

Frances Banks stood with a small group of protesters in the bitter cold outside Ald. Will Burns’ 4th Ward office Tuesday morning.

“I was arrested,” she told me, referring to a sit-in last September at the mayor’s office where 11 were arrested demanding Dyett High School be kept open.  “First time I’ve ever been to jail.

“I’m 73 years old; I was born in Chicago,” she said.  “I went to Chicago Public Schools, Wendell Phillips High School.  We went to neighborhood schools.  We walked to school.”  She went to jail demanding that Bronzeville’s only neighborhood high school be kept open.

At the brief press conference Tuesday, members of the Coalition to Revitalize Dyett objected to a Gazette community newspaper article in which Burns cited his own leadership in fighting a 2012 school board decision to phase out Dyett.  “I thank all the organizations and leaders who worked with me to keep Dyett High School open,” Burns said. “I also thank CPS and Mayor Rahm Emanuel for listening to our community.”

Jeannette Taylor, a local school council member at Mollison Elementary for more than 20 years, said, “It is a slap in the face to me and to members of the coalition and community for Will Burns to take credit for saving Dyett.” Burns says he opposed Dyett’s closing from the beginning.  According to his office, he expressed this opinion in private meetings with top school officials in 2011 and 2012. He spoke against it in meetings of CPS’ Bronzeville Community Action Council — and in a letter to a major daily newspaper in Chicago — though he didn’t speak at public hearings held by CPS prior to the school board decision.  He began issuing statements to the media in 2013, as protests continued.

Coalition to Revitalize Dyett, for its part, protested several times outside the mayor’s office and staged a three-day occupation outside Burns’ ward office in June, demanding a community hearing on the coalition’s plan for the Dyett Global Leadership and Green Technology High School, with a curriculum linked to five feeder elementary schools.

For two years, the coalition has met with local educators and LSCs in the area, along with outside experts and nonprofits, to develop the plan. They collected nearly 1,000 signatures of parents, students and community members on a petition supporting it. Now the prospect of the Obama presidential library being sited alongside Dyett in Washington Park — perhaps featuring the First Lady’s organic garden — gives the concept even greater relevance.

In June, following the protest outside his office, Burns held a community hearing on the future of Dyett.  The report on the hearing, prepared by a consulting firm, is not very specific.  It mentions the coalition’s plan but gives no details about it, and gives it no consideration, despite broad support shown in the hearing.  It lists attendees’ desire for a high-quality open-enrollment high school with a “culturally-oriented curriculum” and “connections to local businesses,” and stresses the importance of adequate resources, support for teachers, student leadership and parent responsibility.

So who saved Dyett? Was it Burns with his behind-the-scenes advocacy, his close relationship to Mayor Emanuel and his consultant’s report?

It seems more likely the decision was political, and the coalition’s public pressure was the key factor.  With an election coming up and the mayor polling poorly in the black community, where anger over school closings continues, it seems likely that an ongoing protest over one of those schools — with senior citizens getting arrested outside Emanuel’s office — was simply too politically costly.

“There’s no privatization in Lincoln Park,” said Jitu Brown of the Kenwood Oakland Community Organization, which backs the coalition.  “There’s no contract operator in Edgewater.  Why can’t we have an open-enrollment high school?  Why is the answer for black children to sell the school to someone, so they can make money on our children?”

And he blames the alderman.  “Alderman Will Burns pretends to be a progressive while he pushes privatization,” Brown said.

Burns told the Sun Times he hasn’t seen plans from a local contract school operator, which is exploring a bid to run Dyett. His position, I’m told, is that the process is now in the hands of CPS. He’s previously said he doesn’t support the coalition’s proposal.

Beneath the dispute is a basic political tension.  The Kenwood Oakland Community Organization is an ally of the Chicago Teachers Union and is prominent in the opposition to Emanuel’s policies.  Burns is a key Emanuel ally and has been endorsed by groups like Democrats for Education Reform, which has backed the mayor in closing neighborhood schools and opening charters.

Democrats for Education Reform was founded by hedge-fund traders who, according to The New York Times, favor charter schools in large part due to “their union-free work environments.”  The group dropped big bucks following the 2012 teachers strike on a TV commercial in which Emanuel, rather ludicrously, claimed victory.  (At the time some argued that the ad buy proved just the opposite.)

The local chapter has received $200,000 from its New York-based chapter, according to Election Board records, and is backing a number of Emanuel’s council allies who face challenges in February.  The group’s endorsement of Burns called him “a true progressive.”

Burns raised a bit of a social media storm last month tweeting about that endorsement.  When a CTU activist responded, “I wouldn’t be proud of that,” Burns tweeted back an emoji of a hand with a finger raised.  The tweet was later taken down.

Local school activists say the “finger tweet” reflects a general attitude of brusqueness and dismissiveness toward constituents for which Burns is widely known. Even the Sun-Times Editorial Board, while endorsing Burns, noted, “He can be arrogant [and] not listen closely enough to community concerns.”

Burns faces two challengers in the February election, mortgage broker Tracey Bey and businessman and three-time aldermanic candidate Norman Bolden.  Bolden backs the coalition plan — which so far is the only proposal out there that would keep Dyett as a publicly operated, open-enrollment high school.

Correction: This blog post has been updated to correct Ald. Will Burns’ record opposing Dyett’s phaseout.