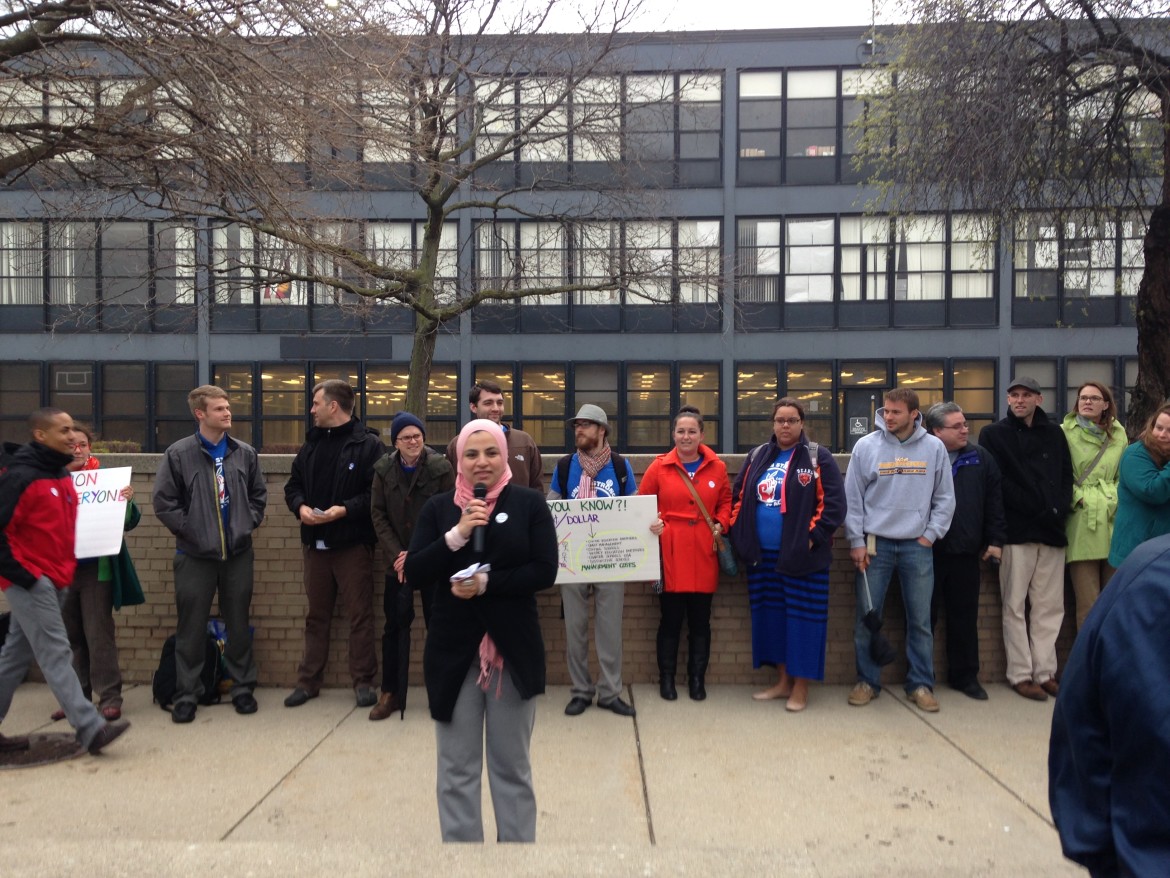 ChicagoQuest teacher Nancy Nassr speaks to her colleagues and dozens of other teachers during rally on April 28, 2014. Teachers seek union recognition and more transparency from Chicago International Charter Schools, the non-profit group that oversees ChicagoQuest and 14 other schools in Chicago. Photo by Melissa Sanchez

Most teachers and staff at ChicagoQuest, a CICS middle and high school that opened in 2011, voted in favor of union representation during an informal election held in December.

But after months of meetings with the school’s management group failed to result in an agreement on union recognition, last week both parties filed separate petitions with the National Labor Relations Board (NLRB) to schedule union elections.

“We compromised on all three of our demands but last week [management] rejected our fifth proposal, breaking down months of negotiations,” said Alex Krueger, a teacher at ChicagoQuest.

Stacy Beardsley, CEO of the school’s management group, ChicagoQuest Schools, said “we got to a point where we wanted to file and get elections on track by the end of the school year.”

ACTS has negotiated contracts for 27 of the schools, including a recent contract for all 16 United Neighborhood Organization charter schools. Another school, Latino Youth High School, is currently in the final stages of negotiating its first contract.

Teachers and staff at Chicago Quest say they wanted to bargain on the existing terms for three other CICS schools – the first charter schools to unionize in Chicago. That didn’t happen. The schools are managed by legally separate entities. According to Beardsley, that means the teachers have separate employers.

The complicated management structure for CICS schools is a major point of confusion and criticism among teachers at ChicagoQuest and other schools that are part of the system.

The non-profit CICS holds the charter to operate Chicago Quest and 14 other schools in the city, but contracts out the management responsibility to five providers. One of the providers is Civitas Schools, a for-profit, limited liability corporation set up by CICS that manages operations at the three CICS schools that unionized in 2009.

When ChicagoQuest was created two years later, CICS formed another LLC to manage that school. Beardsley is the CEO of both management groups.

Chicago ACTS President Brian Harris, who teaches at a Civitas school, said the management strategy “is a way of keeping teachers divided. They keep us split up so they can just deal with tiny pieces at a time.”

CICS CEO Beth Purvis said it was necessary to form a separate management company to run ChicagoQuest because it has a “unique education model” with specific needs that differ from other CICS schools. Beardsley was chosen to run that management group because of her experience running the Civitas schools.

“If the goal was that we never ever wanted it to be unionized, then why would we have the CEO of the only schools that are unionized also be the CEO of ChicagoQuest?” Purvis asked.

On Monday evening, dozens of teachers and staff gathered outside ChicagoQuest to protest what they call a lack of transparency and accountability on the part of the CICS board. The group included staff from ChicagoQuest, as well as other unionized charter school teachers from across the city and members of the Chicago Teachers Union.

Teachers complained about the 3:30 p.m. monthly meeting time for CICS board members, explaining that it’s difficult for staff or parents to get to the downtown meetings at that hour. They also criticized the lack of teachers or parents on the board.

“In no other profession would you have a board of directors comprised of individuals who are not themselves members of that profession,” said ChicagoQuest teacher Nancy Nassr.

Purvis said the board is diverse in other ways, and that CICS has an advisory board that includes parents and teachers. She said the governing board has held its meetings at the same time for years, and moved the public comment period to the end of the meetings to make it easier for teachers or working parents to have their voices heard.

“Is it perfect? Not even close. We’re always working to get better,” she said. “But to criticize this volunteer board is a little unfair.”