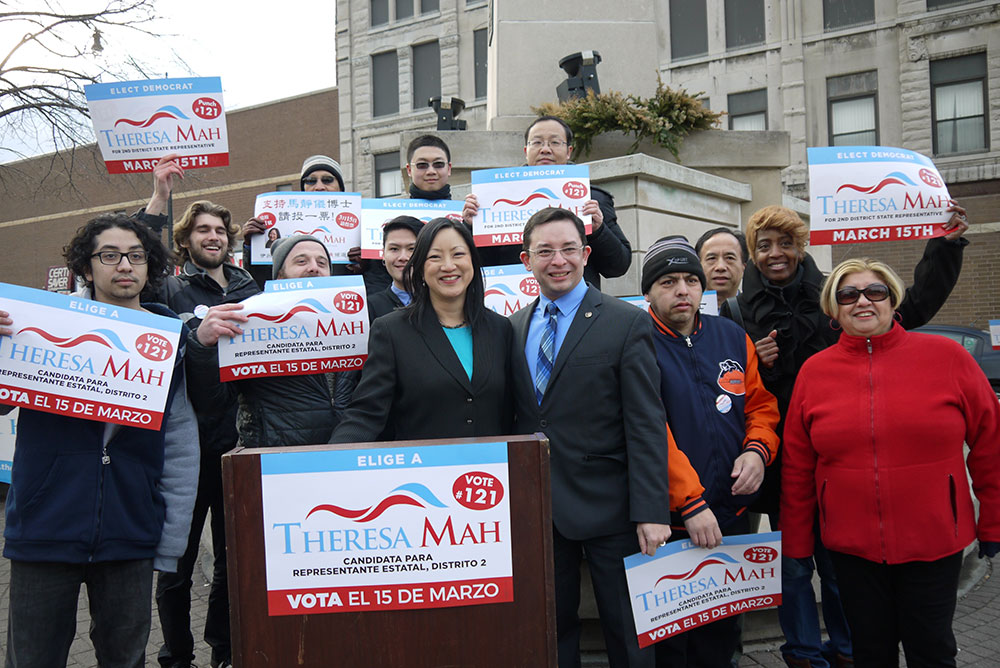 Next week’s primary could move Asian-Americans in Illinois closer to increasing representation at federal and state levels.  But in a series of contests, Asian- Americans are facing other candidates of color.

If U.S. Rep. Tammy Duckworth wins Tuesday (and polls show her with a strong lead) and goes on to defeat Sen. Mark Kirk in November, she’ll double the representation of Asian-Americans in the U.S. Senate.  And if Raja Krishnamoorthi, who has the backing of U.S. Sen. Richard Durbin and five Chicago congressmen, prevails over State Sen. Mike Noland in the primary to succeed Duckworth, Asian-Americans could retain her congressional district.

On the other hand, if either Andrea Zopp or Napoleon Harris win the nomination and defeat Kirk, they would increase by one third the number of African-Americans in the Senate — a body in which white men (and millionaires) are heavily over-represented.

In two state legislative races, meanwhile, Asian-Americans are running in historically Latino districts, and navigating an array of political crosscurrents that illuminate a disintegrating Democratic machine and a progressive movement still finding its way.

In the 40th District on the Northwest Side, community organizer Harish Patel is not the South-Asian candidate for state representative; he’s a candidate who happens to be South-Asian.  He’s running in a 49 percent Latino district (it’s just 9 percent Asian) as a sort of post-ethnic progressive in the mold of Will Guzzardi, who defeated the organization of County Assessor Joe Berrios when he ousted Berrios’s daughter Toni in the neighboring 39th District two years ago.

But Guzzardi won with support of progressive Latinos – as well as a Latino machine faction at odds with Berrios.  Patel doesn’t seem to have engaged that kind of support.  Most notably, 35th Ward Ald. Carlos Ramirez-Rosa, who’s emerging as the most progressive member of the City Council, is backing Patel’s opponent, incumbent Jaime Andrade.  So are fellow Progressive Caucus members Nick Sposato (38th) and John Arena (45th).

It’s notable because Andrade came up through the machine, the old way: he was longtime 33rd Ward Ald. Dick Mell’s driver and aide until Mell installed him as sergeant-at-arms of the City Council.  When Mell retired and moved his daughter into his aldermanic seat. Andrade was appointed to fill her seat in the legislature.

Andrade has been a loyal Springfield Democratic at a time when the litmus test for progressives is opposition to the agenda of Gov. Bruce Rauner.  In a less perilous period, a higher bar might be set.

In the 2nd District, on the Southwest Side, the political alignments are utterly byzantine; everyone seems to be calculating what to make of the enemy of their enemy’s enemy. That’s where Theresa Mah, a former policy advisor for Gov. Pat Quinn, is facing off against Alex Acevedo, who’s seeking to replace his father, longtime State Rep. Edward Acevedo.

The race made the news last month when supporters of Acevedo crashed a press conference where U.S. Rep. Luis Gutiérrez was endorsing Mah, prompting Gutiérrez to move across the street and cut his announcement short.  It appears Acevedo is running scared.

Six years ago, Mah helped organize a community drive to bring Chinatown’s precincts into a single legislative district – and the voting age population of the 2nd is now 23 percent Asian and 53.5 percent Latino, according to the Illinois Coalition for Immigrant and Refugee Rights’ political almanac.  Before redistricting, the 2nd was 70 percent Latino.

Mah has a shot – if she can motivate Chinatown voters to turn out in much-higher-than-usual numbers, and also appeal to enough Latinos.  She’s trying to broaden her appeal based on a progressive program that prioritizes immigrant issues, as well as support from grassroots progressives in the community and endorsements from Latino elected officials.

Gutiérrez’s backing was a major boost – though whether it translates into votes remains to be seen – and on Wednesday, Mah was endorsed by the other major Latino leader in town, County Board member Jesús Garcia. Whatever issues they may have with the Acevedos, Gutiérrez and Garcia are also recognizing the potential importance of the Asian-American community on the Southwest Side, where it is growing and spreading out geographically.

Mah’s endorsement by Ald. George Cardenas (12th) has more immediate benefits for the endorser.  Cardenas is challenging one of Acevedo’s key backers, State Sen. Antonio Muñoz, for 12th Ward Democratic Committeeman.  Cardenas’s name on signs with Mah is likely to win Chinese-American votes for him in that contest.

So it’s worth it for Cardenas to overlook Mah’s support for Pete DeMay’s campaign for Cardenas’s aldermanic seat last year. (DeMay was thrown off the ballot in a clear display of incumbent protection andCardenas ended up running unopposed.)  DeMay is also backing Mah, as is the progressive network that came together behind Garcia’s mayoral campaign last year.  (Mah backed Garcia, while Cardenas – like Gutiérrez – supported Mayor Rahm Emanuel.)

Cardenas is particularly disliked by the ward’s progressives.  While Muñoz and the elder Acevedo, products of former Mayor Richard M. Daley’s Hispanic Democratic Organization, represent old-school machine politics, they are at least pro-labor, as well as strong voices for immigrants.  Cardenas and his ally and campaign manager, 15th Ward Alderman Raymond Lopez, are seen as a new breed of neoliberal politician. Cardenas in particular has worked hard to bring charter schools to his ward.

Right now Cardenas is in hot water. His ties to the Emanuel administration are exposed just as the mayor’s support tanks – because he backed a CPS proposal to co-locate Spry High School and Saucedo Elementary.  Strong community opposition won reconsideration of that move in January.

Mah may be able to navigate these troubled waters, but it can’t be easy.  In endorsing her candidacy, Chuy Garcia pointed out that she is seeking to unite immigrant communities, while Acevedo’s campaign works to divide them.

As politically emerging immigrant communities negotiate alliances and rivalries to expand their voices, and as a new wave of progressives scrambles to build grassroots organization, Illinois’ political establishment, crippled by a vacuum of leadership at the top, seems to be fragmenting and turning on itself.