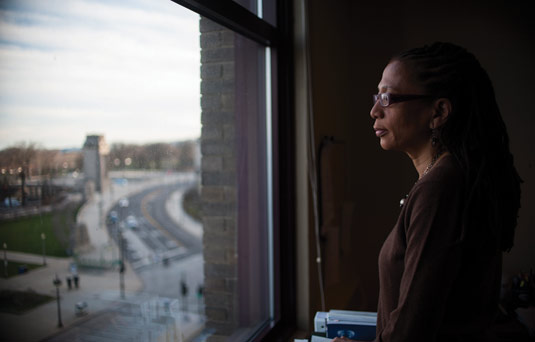 Interim publisher Laura S. Washington knew early on in her days at The Chicago Reporter that it was “a really special place that we were privileged to work at, and it would be unlike any other place you would ever work.” Photo by Lucio Villa.

In 1979, Laura S. Washington started her career at The Chicago Reporter as an intern. Then she propelled herself forward to every position the Reporter had to offer: reporter, assistant editor, co-managing editor, editor and, finally, publisher. After two stints over 17 years, she moved on to other opportunities in 2002. But it’s as if she never really left. She accepted the position of interim publisher in October 2012 while continuing her duties as a columnist for the Chicago Sun-Times and as a political analyst for ABC 7-Chicago.

What was the environment like when you first came to the Reporter?

It was rowdy and a lot of fun. We were talking about this the other day at the staff meeting, about how we used to have a dart board in the bull pen and we would have dart games at the end of the day on Fridays, and the Jameson [whiskey] would come out. There was a real camaraderie and a real team effort. There was a feeling that this was a really special place that we were privileged to work at, and it would be unlike any other place you would ever work. There was a lot of support and no competition. One of the reasons I came back is that there’s no place like the Reporter. It’s such a rarified opportunity. You want to sink your teeth in it again and again.

Did you feel confident when you started at the Reporter?

No. Of course not [laughs]. I was terrified. There’s a lot at stake with investigative reporting. Accuracy is crucial. It’s hard to get credibility back. The story that I’m thinking of is one where I quoted somebody saying something pretty controversial, and he denied it. We didn’t record stuff. I only had my notes to back me up, and [Reporter founder] John [McDermott] did stand by me. He had a relationship with that guy and he got a lot of heat but he stood by me. I thought that was important. It gave me a lot of confidence.

Do you think that the Reporter shaped your personality?

I was painfully shy growing up and even when I came to the Reporter, I was not comfortable talking with people and asking them tough questions. But the more I did it, the more comfortable I got with it and the more I enjoyed the chase and the “get.”

There were times, especially in my early years, where I was terrified to pick up the phone, even for a friendly source. I think every young reporter goes through that, but you have to get over it. The Reporter gave me the opportunity to force me to do things that scared me. I would be on panels or on television or on the radio and I’d be shaking–like literally standing at the podium with my piece of paper shaking. When you know you’ve got an institution like the Reporter backing you up that’s involved in justice and equity, it really helps you to overcome that.

When you were editor and publisher, what changes did you institute?

I felt that the Reporter had not been as hard-hitting as it had been at one time. Of course, the people who were here at the time probably disagreed with that, but I felt that we needed to get back to our hard-hitting investigative roots, particularly in taking on stories that others wouldn’t take on or were afraid of–like public housing, police services, the fire department, park district. When I came back on as editor and then publisher, the city had changed demographically. Latinos were on the scene in a way that they had never been before and they weren’t really being covered by other media in the ‘80s and ‘90s, and we were the first to take that on. We created Latino beats; we put a real, intentional focus on Latino issues.

What were some of the stories that stuck out as having a lot of impact?

I worked on a story–somewhere in the ‘80s–about the inequitable deployment of police officers. Black and Latino districts were not getting their share. That was one of the stories that [then-Mayor] Harold Washington used [to campaign on]. It’s been an ongoing issue. The black and Latino aldermen are arguing that officers should be assigned to their districts, but it’s a political hot potato because the mayor doesn’t want to take those officers away from other neighborhoods. No one wants to lose their cops, even if they have low crime rates. That was a story that was extremely controversial at the time. The beauty of the Reporter is that we proved things that people suspected were true. You know, a lot of people think that black people are paranoid about racism, that we see racism behind every tree. In fact, there are many institutions and government decisions that have a racial impact. Our job is to document these impacts, and I think that story was a good example.

What’s the proudest achievement of your career at the Reporter?

There was a story about how much money [former Mayor Richard M.] Daley had given to black churches for some of their programs. We were making the case that there was a tie in there because the leaders of those churches were supporters of the mayor. We took a lot of heat for that story. But we did it and we survived it.

Is it hard to see history repeat itself?

You can’t assume that you’re solving any problems with any one story. I think that’s very frustrating. When John McDermott created this publication in 1972, I remember him saying he thought he was going to put himself out of business because the idea was that, in 20 or 25 years, we’re going to change the face of the city so that people don’t need a watchdog; people would see the right way to do things and see the light. But race is an endemic part of our society and, sure, it may be more covert than it used to be. People don’t call each other N-words to their face now, but many of the policies that you see in government and in the private industry continue. But that doesn’t mean you stop fighting. That means it’s even more important to be vigilant. We have a black president, but we don’t want to be complacent and think all of our problems are solved, because all you have to do is read the Reporter every month and find out otherwise.

What do you hope to bring to the Reporter now?

Stability and keeping it strong and preparing it for the next era, which will be a digital era. I want to make sure we begin to build the path for the next publisher to continue the tradition of the next 40 years. I’d like to think like McDermott, that we won’t need the Reporter in 40 years, but I’m not going to count on it.