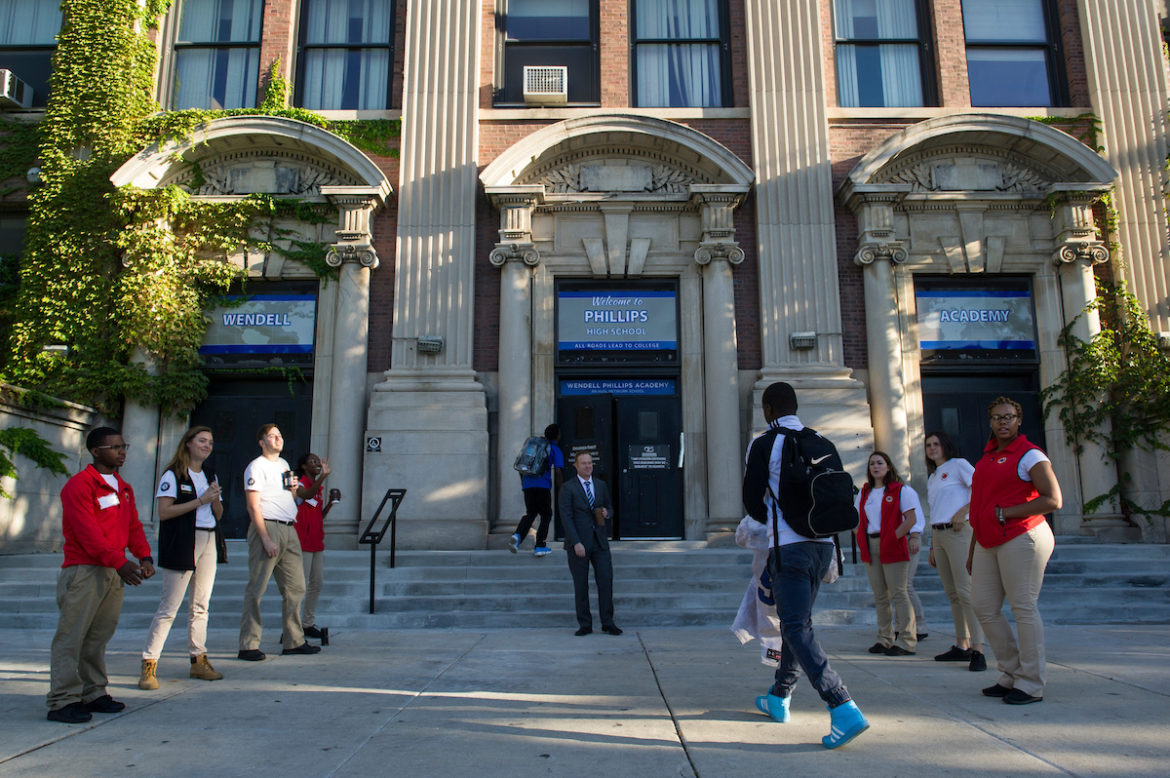 Phillips Academy in Bronzeville is among 16 high schools to make major gains in graduation rates. Students are greeted each morning by staff when they arrive.

Marshall High School achieved a major milestone recently: More than half its students graduated for the first time in years.

The school in East Garfield Park, a lower-income black neighborhood on the West Side, posted a graduation rate of 58 percent in June, up 18 percentage points over the previous year. Marshall is among 16 high schools, most of them predominantly black or Latino, to make double-digit gains in graduation rates this year, according to 2016 data released recently by Chicago Public Schools.

The gains at Marshall, Phillips High School on the South Side, and other black schools helped drive up the citywide African-American graduation rate by 4 percentage points, a slightly higher rate of improvement than the district as a whole.

But the racial gap in graduation rates is still stark: White students posted a graduation rate of 81 percent, compared to 67 percent for African-American students. The rate for Latinos is now 78 percent. Since the 2013-2014 school year, when per-student budgeting began, black and Latino neighborhood high schools are among the hardest hit by budget cuts. Click here to enlarge.

The improvements come at a time of major budget cuts that put programs in jeopardy. Neighborhood high schools have been hit hard by recent cuts sparked by enrollment decline, with black high schools losing an average of $1.9 million and Latino schools an average of $780,000 in the past three years (since the 2013-2014 school year, when per-student budgeting began). Meanwhile, some high schools that received millions in extra federal dollars under the School Improvement Grant initiative have seen their grants expire as the Education Department phases out the program because of mixed results nationally. That initiative has so far funneled some $7 billion to more than 1,800 low-achieving schools across the country.

Marshall’s grant expires this year, but the school is getting something of a reprieve: To sustain the academic gains, the state decided to give Marshall nearly $800,000 over the next two years, some of its final pot of federal money under the grant initiative.

Providing resources is critical to closing the graduation rate gap, especially for black males, said John H. Jackson, the president and CEO of the Schott Foundation for Public Education, which focuses on issues of equity and opportunity.

In Chicago, the graduation rate gap between black and white males is now 19 percentage points. Among districts that enroll the most black male students, Chicago has among the worst racial disparities in graduation rates, according to data collected by the foundation.

“What it says is that there are not enough supports being targeted toward African-American males that would allow us to accelerate the rate in which they graduate,” Jackson said. “Obviously, if you have a population that systemically is behind, there has to be a broader array of supports that will allow them to close that gap.”

At Marshall and other schools, the work being done to make sure students graduate takes time, planning and people—illustrating why money is critical.

Marshall’s new principal, Falilat Shokunbi, said the staff has been applying strategies used to help freshmen stay on track to graduate—closely monitoring grades, attendance and behavior—to all students. In addition, a clerk and a dean make home visits to track down students who are frequently absent, and teachers meet regularly to discuss which students need some type of intervention.

Teachers divided up those students who were showing low attendance at the beginning of the school year and assigned a teacher mentor to them, Shokunbi said. “A lot of our teachers were really good about giving cell phone numbers or [saying] ‘I’ll give you a wake-up call in the morning’ to make sure you’re leaving the house on time to get to school.”

Marshall has also opened a “de-escalation room” where students can go to talk to an adult if they feel angry or upset. The idea is to give students a chance to prevent misbehavior instead of turning to out-of-school suspensions, which have historically affected black male students disproportionately.

Phillips High in Bronzeville also posted a big jump in its graduation rate this year, to 58 percent from 46 percent.

Principal Matthew Sullivan, a former teacher at Phillips, said he has focused on creating an environment that encourages students to aim not just for graduation but beyond, to college or a career. Sullivan brought in the nonprofit Umoja Student Development Corporation to provide students with social and academic support.

Sullivan has also made an effort to pair students with teachers or other staff of the same gender, and race where possible, for weekly sessions to discuss their academic progress and school behavior. For African-American male students, Sullivan said, “having that bond and seeing successful African-American males in front of them every week has really helped us.”

But the Schott Foundation’s Jackson cautions against thinking that just because a few highly segregated and high-poverty high schools have achieved success against the odds, other schools will too.

“There are so many reasons why an individual school can yield some level of outcomes that’s just not replicable,” he said. “They may have a great leader at that school who’s well-connected to many of the supports [and] resources. The fact that there are some neighborhood schools that are outperforming what might be expected, that’s not a surprise because that’s been happening for decades.”

That’s led some in the city to call for a more targeted approach to help students struggling the most, as well as a more equitable system that would direct more money to high-need schools.

“I think we’ve got to put a lot more work into young men, black men especially, while they’re in high school,” said Phillip Jackson, who heads the Chicago-based nonprofit Black Star Project. “If there is no linked effort, then the same kind of relatively low-level success that we’re having now, in comparison to the rest of the student population, we will continue to have that.”