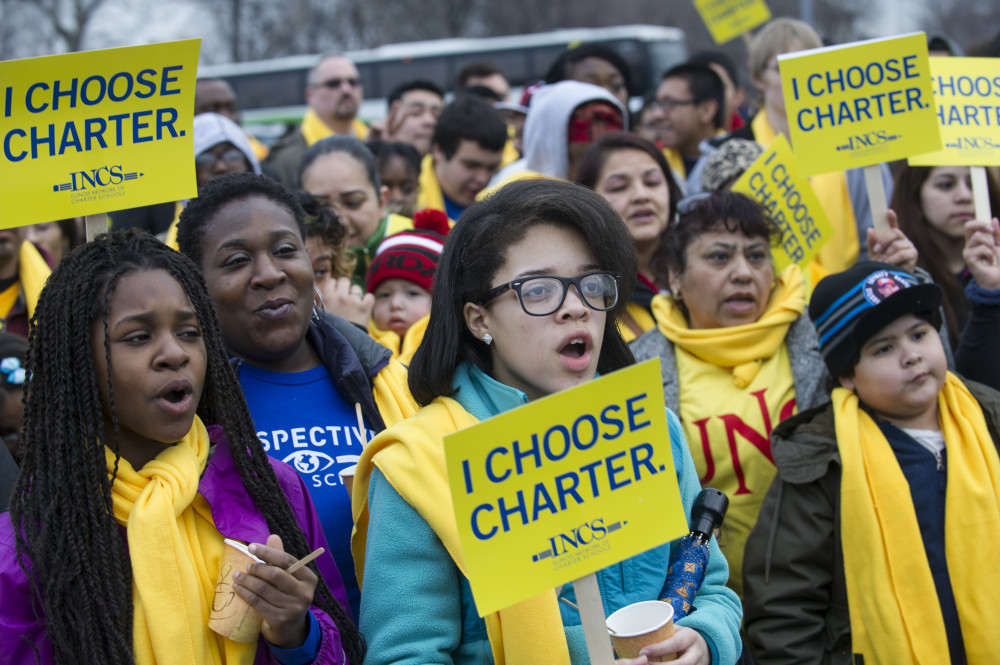 More than a thousand charter school supporters gathered in April 2014, for a quick rally before heading to Springfield.

One bill would eliminate the state’s independent charter school authorizer. Another would place a cap on salaries for charter school CEOs and require school districts—not schools themselves–to hold lotteries for new students. A third bill would prevent the opening of new charter schools in neighborhoods where traditional public school have been shuttered in the past decade.

These are just three of nearly a dozen charter school-related bills before the Illinois Legislature this year that pick away at the historic autonomy granted to charter schools.

“There’s no question about it. This year is the most dangerous year to the charter school system we’ve ever had,” Broy said in a recent interview with Catalyst Chicago.  “These bills would fundamentally alter the way charter accountability works.”

“Taxpayers are demanding more accountability from charter operators,” said CTU President Karen Lewis in a statement. “They want to know whether the money going to these schools is actually being spent on educating students.”

Some outside observers say it might be time to have a conversation about whether Illinois should continue having charter schools, period, instead of addressing the issue through piecemeal legislation in a highly charged and impassioned environment. In a way, the bills are a response to the outrage felt by many educators and parents after CPS closed 50 neighborhood schools last year.

The battle over charter schools plays out differently from state to state. National attention has recently been focused on New York City, where the state Legislature thwarted Mayor Bill DeBlasio’s attempt to charge rent to charter schools operating in public buildings.

Nina Rees, president and CEO of the National Alliance for Public Charter Schools, called the anti-charter school bills under consideration in Illinois “out of step” with the best practices in state laws across the country. She weighed in on the legislation in a press release sent out on Tuesday in support of the close to 1,500 Illinois charter school students and parents who traveled to Springfield to lobby legislatures to vote against the bills.

Here’s a summary of the major bills and where they stand in the legislative process:

Another bill — SB 3303, which has had no traction in the state Legislature — would prohibit the opening of any new charter schools in neighborhoods where a traditional public school has been closed in the past decade. Meanwhile, HB 5328 would require charter schools in Chicago to be administered by local school councils, just like traditional public schools. While that bill has been approved by the Education committee, it has no companion bill in the Senate.

INCS is tracking all charter school-related bills on its web site, as is the CTU.