When Richard J. Daley, the longest sitting mayor in Chicago history and the first to voluntarily vacate the office in half a century, announced that he would not seek re-election, residents of every background and political orientation experienced a kind of collective light-headedness. The political moment–part hope, part fear, part giddy speculation–opened a floodgate. Veteran politicians as well as novices rushed to create exploratory committees and began gathering petitions and raising money for possible campaigns. Community organizers mapped strategies to mobilize people around key issues. Artists and activists came together in imaginative interventions. The possibility for dramatic changes in Chicago A.D. (After Daley) was a dizzying and seductive prospect.

And yet candidates across the board, when asked about their policies concerning education and public schools, betrayed a lack of vision and imagination. Most disturbing of all, they displayed little knowledge about the basic realities of Chicago schools or of the initiatives that might actually improve them. They responded instead with clichés, conventional thinking, and “received wisdom:” We should fire the “bad teachers” and focus all available energy on raising standardized test scores.

Even candidates who in other areas could draw on broad evidence and deep investigation to inform their politics were settling for the dominant educational frame that was both ill-informed and ideologically driven. So, too, with the candidate who eventually became mayor, Rahm Emanuel, whose education platform emphasized what individuals (school leaders, teachers, parents, students) could do differently, rather than systemic reform.

In January 2011, in response to this sorry state of affairs, a large and diverse group of Chicago-area educational researchers began assembling to develop a popular curriculum for educational improvement based on solid research rather than orthodoxy or ideological dispositions. We started by thinking about the faith-based, fact-free claims that are repeatedly made about what’s wrong with public schools and what will solve these problems, and realized that our goal should be to re-articulate the public debate about education–that is, to push the conversation to address the bigger picture, the deeper problems that get masked in rhetoric and campaigning, and to bring evidence to the foreground.

This dynamic moment, a time of disequilibrium and dislocation, was also an opportunity for intervention. We wanted to be of use.

We identified four broad visions, fleshed out with recommended actions, pledges for leaders, and resources for further inquiry, into a working document: Chicago School Reform: Myths, Realities, and New Visions (The document was updated in June and available in its entirety).

The four visions: Provide bold leadership that addresses difficult systemic problems and avoids scapegoating the “usual suspects”; develop and implement education policy and reform initiatives that are primarily research-driven, not market-driven; improve teaching and learning effectiveness by developing standards, curricula, and assessments that are skills-based, not sorting-based; and ensure the support, dignity, and human and civil rights of every student.

We recruited at least 10 researchers in each area who were and are available for elaboration and further dialogue about the accompanying myths and realities, forming the Chicagoland Researchers and Advocates for Transformative Education (CReATE). Setting the stage was a statement of values concerning public education in a democracy, which emphasizes that schools in a democracy should aim to prepare the next generation to be knowledgeable and informed citizens and residents; to be critical thinkers and creative problem-solvers; to be ready to contribute positively to communities and workplaces characterized by diversity; and to be healthy, happy, and able to support the well-being of others with compassion and courage.

Our work does not end with a written statement.  In March, we organized a public forum with over 200 in attendance, where we highlighted both the work of researchers and the work of several organizations (of students, educators, parents, and community members) to advocate for research-based school reform.  Our collaborations with organizations have continued and grown, including a research partnership with the Chicago Teachers Union that will extend through the 2011-2012 academic year.  And of course, we waited for the announcement of the new CEO of Chicago Public Schools, and currently await a response from new CEO Jean-Claude Brizard to our request for a meeting to share our research and our hopes of working collectively on generative, not punitive, school reform.

Our request for working collectively is all the more urgent as Mayor Emanuel suggests directions for school reform that are not necessarily based on evidence–including the current emphasis on making the school day longer, rather than, say, making the school day smarter with more efficient use of time.

CReATE is one of our attempts to engage this imminently teachable moment, when no one knows all the answers and we are compelled to improvise with the unfinished, the surprising, and the unforeseen. Let’s take up this moment with evidence, dialogue, and hope. 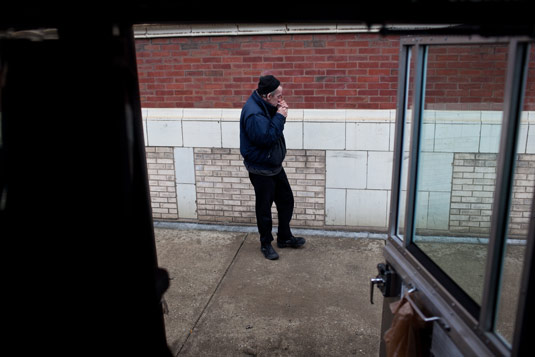 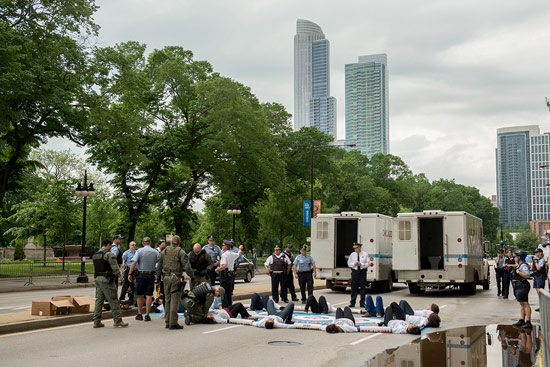 Protesters blocked traffic in front of the Hilton Chicago until 10:15 a.m. Another immigration rally is scheduled to be held in front of the hotel at 4:30 p.m. Photo by Tyler Stabile