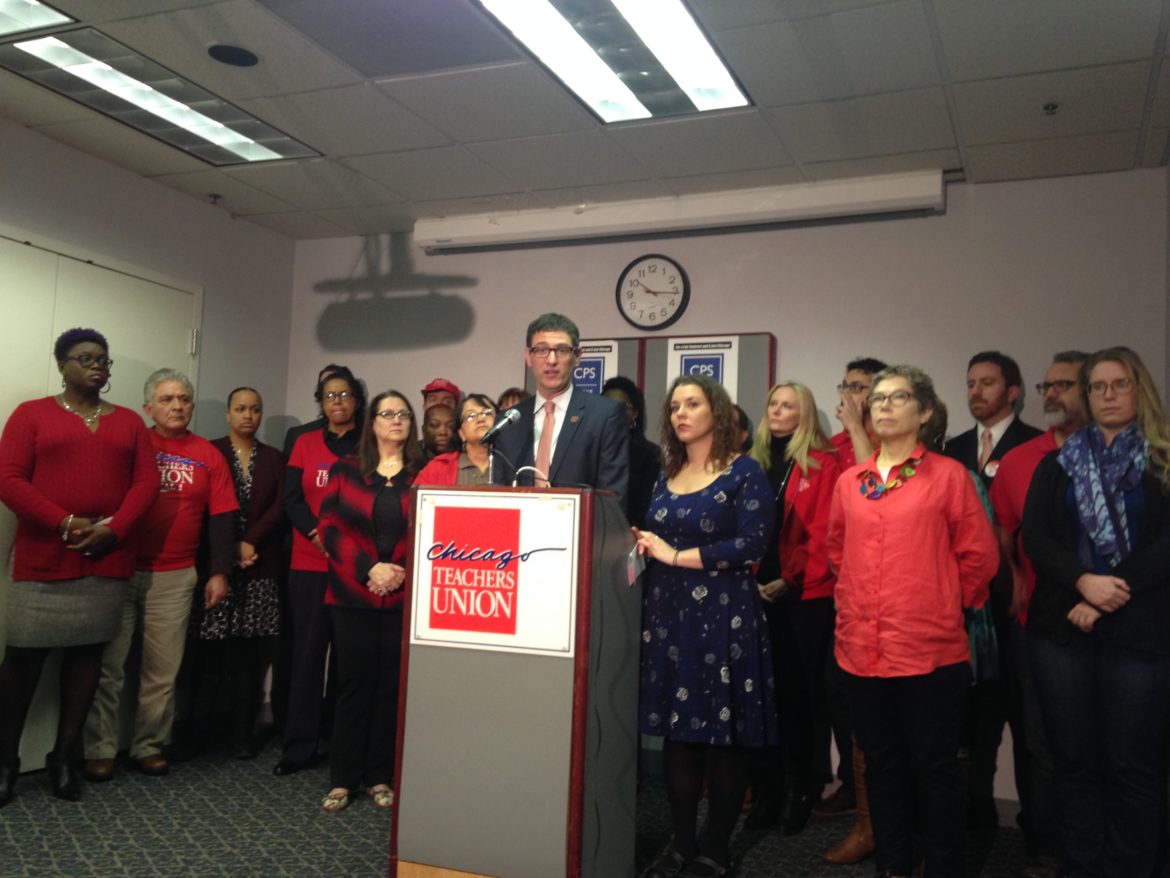 “By any count, that’s overwhelming,” CTU Vice President Jesse Sharkey said at a press conference. “Rahm, Forrest Claypool: listen to what teachers and educators are trying to tell you. Do not cut the schools anymore.”

Union officials said close to 92 percent of the union’s 24,752 eligible members voted during a three-day period last week. Of those who voted, nearly 97 percent favored a walk-out. The turnout was about the same as in 2012, when the CTU went on strike for seven days.

In a statement, Chicago Public Schools CEO Forrest Claypool said that while he understands teachers’ frustrations, “a strike that threatens to set back our students’ progress is simply not the answer to our challenges.”

Despite the vote, a strike can’t legally happen until May. That’s because the state’s education labor relations board won’t meet until Jan. 21 to decide on a CTU demand for injunctive relief to compel the so-called “fact-finding” stage, one of the last required steps in the protracted process leading to a walkout. Once a fact-finding panel is convened, the clock starts on a 120-day process that needs to play out before a strike.*

District leaders have said that it’s too early to even talk about a strike, as an appointed mediator has not yet finished listening to both sides’ contract proposals.  In addition, Claypool has been trying to shift the public focus on funding equity from the state, and getting the CTU on board to “join us to fight for our shared goal of equal education funding from Springfield.”

A spokeswoman for the mayor echoed that sentiment in a separate statement. “The Mayor finds the idea of cuts to our schools unconscionable and he hopes that CTU will join the City and CPS in demanding a funding system that will treat our children fairly and secure our teachers’ futures,” she said.

According to the union, the district is asking for a pay freeze and wants to phase out the so-called “pension pick-up,” in which CPS picks up 7 of the 9 percent that educators must pay into their pension costs. Meanwhile the CTU is asking for thousands of new positions, including teachers, nurses and social workers, in addition to a reduction in paperwork and standardized testing.

The district says that the union’s demands would cost an additional $1.5 billion per year.

Even though a potential strike is still five months away, just the threat of a walkout is likely to add pressure to the mediated contract negotiations that have been sputtering along since the summer.

Also, a second teachers strike in less than four years certainly would be politically damaging for Mayor Rahm Emanuel, who is in a vulnerable position now due to the release of a 2014 video of a young black adolescent named Laquan McDonald getting repeatedly shot in the back by a white police officer.

The potential for a strike comes as the district faces a massive, mid-year budget hole. Under Claypool’s advice, the CPS Board of Education approved an operating budget earlier this year that depends on a half-billion dollars in unappropriated aid from the state. However, lawmakers have been unable to agree on a state budget, let alone on giving a hand to CPS.

Without relief from Springfield, Claypool has said, the district will have to turn to a combination of layoffs and more “unsustainable borrowing.” In fact, the Board will vote this week on recommendations to increase its short-term line of credit by $130 million, and issue another $120 million in bonds. And sources say that Claypool is considering 450 layoffs in Central Office.

On Monday afternoon, CPS released memo from the financial firm Ernst&Young dated last Friday that spells out the extent of the district’s financial troubles. The memo indicates that CPS will “completely exhaust” its current line of credit and cash resources by January. Part of the trouble is that the state still owes CPS about $119 million in block grand monies it was supposed to reimburse in September.

Sharkey says the mayor should use his “magical Rolodex” to call up some of his biggest donors and get their support for new revenue sources in Chicago. He says the only options can’t be more borrowing or cuts.

In August, the district abruptly walked away from a tentative one-year deal, citing disagreements over teacher evaluations and layoff order. That tentative deal preserved the “pension pick-up” and included a promise from the district to not open any new charter schools for the duration of the contract.

Soon after, Martin Malin, a professor at the ITT Chicago-Kent School of Law, was brought in to mediate the negotiations.

Earlier this month, the union officially requested that the negotiations move into fact-finding, in which a three-person panel reviews both sides’ most recent contract proposals and proposes an agreement.

The district rejected the request, saying the mediation has not run its course. The union subsequently filed an unfair labor practice complaint with the Illinois Educational Labor Relations Board, seeking to compel fact-finding. The labor relations board has not yet made a decision.

Once a panel is convened, it would have up to 75 days to review both the CTU’s and CPS’s most recent contract proposals and issue recommendations, which are then made public. Then both sides have up to 15 days to accept or reject the panel’s report. If accepted by both sides, the recommendations would become  the new labor contract.

If either side rejects a settlement proposed by the panel, the union must wait 30 days before it can strike.

The final decision to strike would be made by the union’s 800-member House of Delegates, which includes representatives from each school.

*Story was updated on Dec. 14 at 2:45 p.m. to include new information on a hearing set by the state’s education labor relations board and a financial memo from Ernst&Young; it was updated again at 3:40 p.m. to include a statement from the mayor’s office.