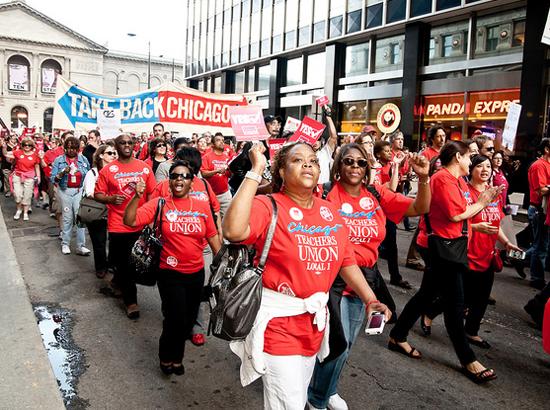 With each passing day, Chicago gets closer to the next mayoral election. And with each passing day, the plot thickens. The latest twist comes from the Chicago Teachers Union. Last week, the union’s House of Delegates voted to launch an independent political organization.

According to the resolution passed by the delegates, the organization will allow the CTU to “engage with other likeminded progressive organizations to push for immediate institutional changes to address the real time needs of working and poor communities in Chicago through legislative and electoral engagement in City Hall and the Illinois General Assembly.”

The group will be able to support ballot initiatives and issue-based campaigns.

It’s no secret that there has been grumbling against Mayor Rahm Emanuel, particularly around his decision last year to close 50 schools, and the continuing fallout and tension within some schools that resulted from the mass closings.

And at the Grassroots Collaborative’s Take Back Chicago forum last October, organizers spoke openly about building a progressive political alternative in Chicago.

Both the need for community organizations and labor unions to have a voice, as well as dissatisfaction with the political status quo, were the impetus for forming the IPO, said Jackson Potter, staff coordinator for the Chicago Teachers Union.

But Potter stressed that the organization wasn’t created with an eye toward the 2015 mayoral election. In fact, he said, “it’s about having a presence year round on issues like sick days for all workers, more rights on the job and increases in the minimum wage.”

And also, he said, as a way to allow working people — like those who send their children to Chicago Public Schools– a voice in politics. “The vast majority of people in our city are voiceless. How do we change the dynamic so that the platforms on which candidates run are not only decided by corporations?”