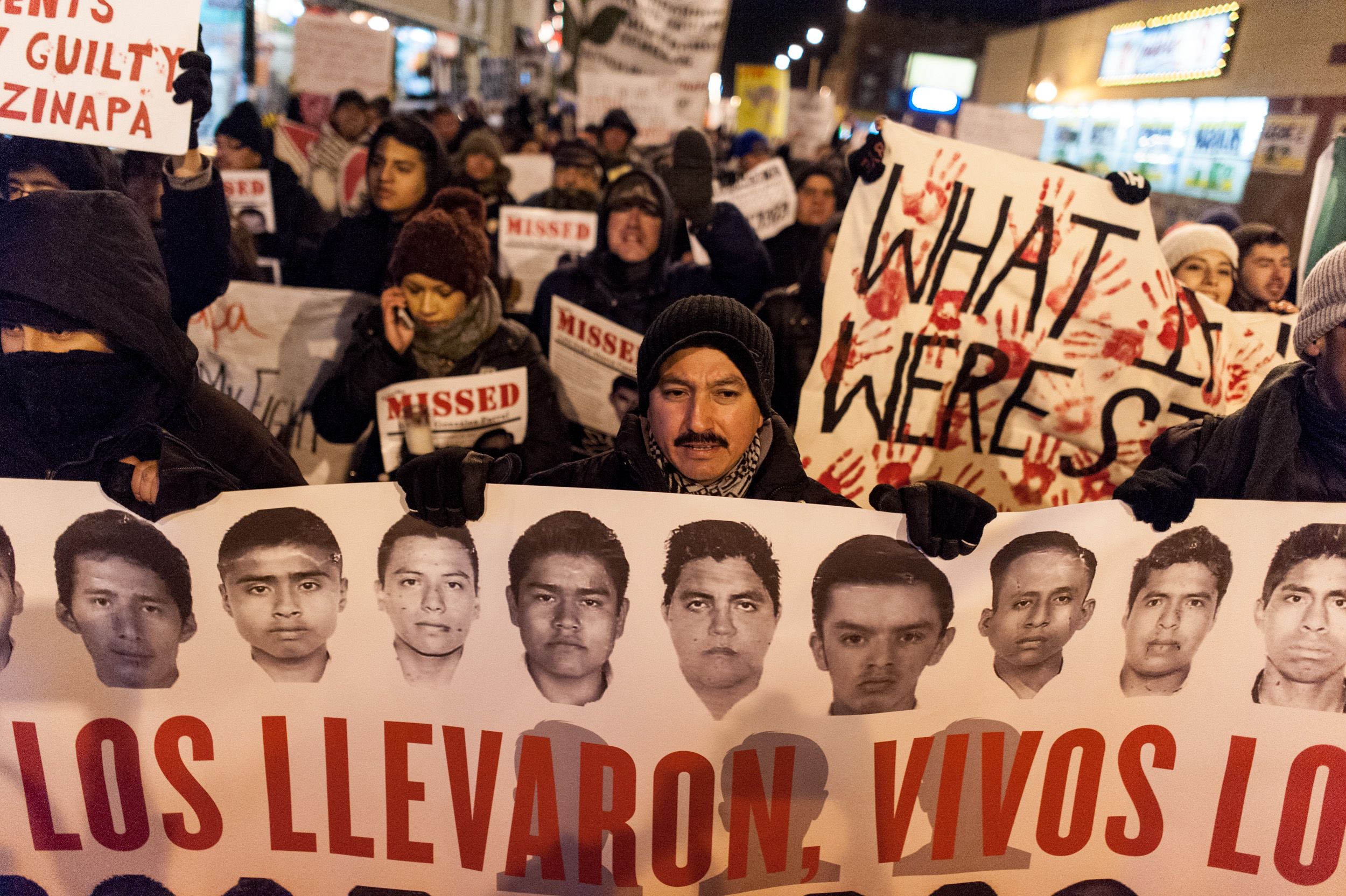 Hundreds marched in Chicago's Pilsen neighborhood on Nov. 20, an international day of action in solidarity with protests in Mexico over the disappearance of 43 Mexican student activists. Another day of action is planned for Wednesday. [Photo by William Camargo]

Mexican oil, gold and silver sell through the Chicago Board of Trade. The country’s limes, lettuce and avocados fill local grocery stores long after the Midwest harvest season ends.

The connections between Chicago and Mexico are strong — especially for immigrants from Mexico and their children who have helped shape this city. In recent months, some Chicagoans have felt the link with Mexico strengthen as grief and anger arose over the disappearance of 43 students from the southern state of Guerrero — nearly 2,000 miles from Chicago.

“A lot of us were in denial about just how bad the situation was,” said Laura Ramírez, a PhD candidate at the University of Illinois at Chicago and a former Chicago Public Schools teacher. “This issue really made us face the horrors that are going on, and we can no longer look away.”

Ramírez has spent the last two months organizing with Chicago’s Justice in Ayotzinapa Committee. The group and others across the U.S. are planning for a week of action starting Dec. 1 to keep the spotlight on events in Mexico. On Nov. 20, the local committee was among dozens of organizations across the country that held rallies and marches at the request of the families of the students. Since three students from a teachers college in Ayotzinapa in Guerrero were killed and 43 others disappeared, similar committees have sprung up throughout the world.

The students were ambushed Sept. 26 after arriving in Iguala, about 160 miles from their school, where they went to protest education policies instituted by the Mexican government. The mayor of Iguala and his wife have been implicated in the attack, which appeared to be a joint effort by local police and a drug trafficking organization.

Ramírez said she had previously attributed such disappearances to former dictatorships in Argentina and Chile. She knew Mexico had its fair share of corruption and violence but didn’t want to believe it could be home to such blatant atrocity. The Mexican government supports the findings of  investigators who concluded that  local police  shot at the students, kidnapped them and then handed them to the drug gang, which burned them alive and buried their bones.

The tragedy has led to some of the largest mass protests in recent Mexican history.

“This is one of the few situations where it’s so clear who is at fault,” said Guillermo Trejo, a professor of political science at Notre Dame, who participated in a Nov. 20 forum about the case at the University of Chicago. “It was the coalition of state agents and organized crime that were behind this.”

In the absence of forensic evidence, the families of the students have refused to believe they were killed. Some say the government investigators  crafted their story to end protests that demanded the return of the students. In Chicago, protesters’ demands mirror those of their Mexican counterparts, including calling for the resignation of Mexican President Enrique Peña Nieto, who announced a series of reforms on Thursday in response to criticism over his handling of the situation.

For longtime students of Mexican politics, the coordinated response and calls for solidarity around the world have been surprising. The country is home to nearly 100,000 deaths associated with organized crime just since 2006, according to government statistics.

These particular disappearances, though, of students hailing from a  progressive rural teachers college –- and who criticized the government for alleged discriminatory hiring preferences and inadequate funding of education — have launched a movement.

“People are really amazed,” Ramírez said. “How is it that these 43 disappeared have woken up a country that has 70,000 of them? We never know what’s going to be the spark.”

Latinos in Chicago have felt the ensuing flames.

Hundreds of people protested in Pilsen on Nov. 20 during a global day of action in support of the Ayotzinapa students. People driving by beeped their car horns or raised their fists in solidarity, some stopping to join protesters in the below-freezing cold. Many were students or teachers who identified with the educational and political goals of the Ayotzinapa protesters.

At Northwestern, student organizers quickly teamed up with Evanston residents to plan their march.

“We’re standing in solidarity with the students in Ayotzinapa, not because we are students too, but because it’s something that should matter regardless of whether we are students or not,” said Cinthya Rodríguez, a junior ethnic studies major.

In Evanston, protesters tied the repression in Mexico with the events in Ferguson, Mo., where the death of Michael Brown, an unarmed young black man, at the hands of a white police officer has sparked outrage. While African-Americans have dominated the protests in Ferguson and Latinos have dominated those in solidarity with the Ayotzinapa students, Rodríguez said it is important to understand the connections between the two: state-sanctioned or state-sponsored violence.

The Ayotzinapa solidarity movement in Chicago is preparing for Wednesday’s day of action. Protesters in Mexico, who have faced violent repression since they first took a stand against the violence, are asking the international community to keep making noise.

“There have been a lot of threats by the military using very dirty tactics to quiet them,” Ramírez said. “People coming together is helping them survive every day.”