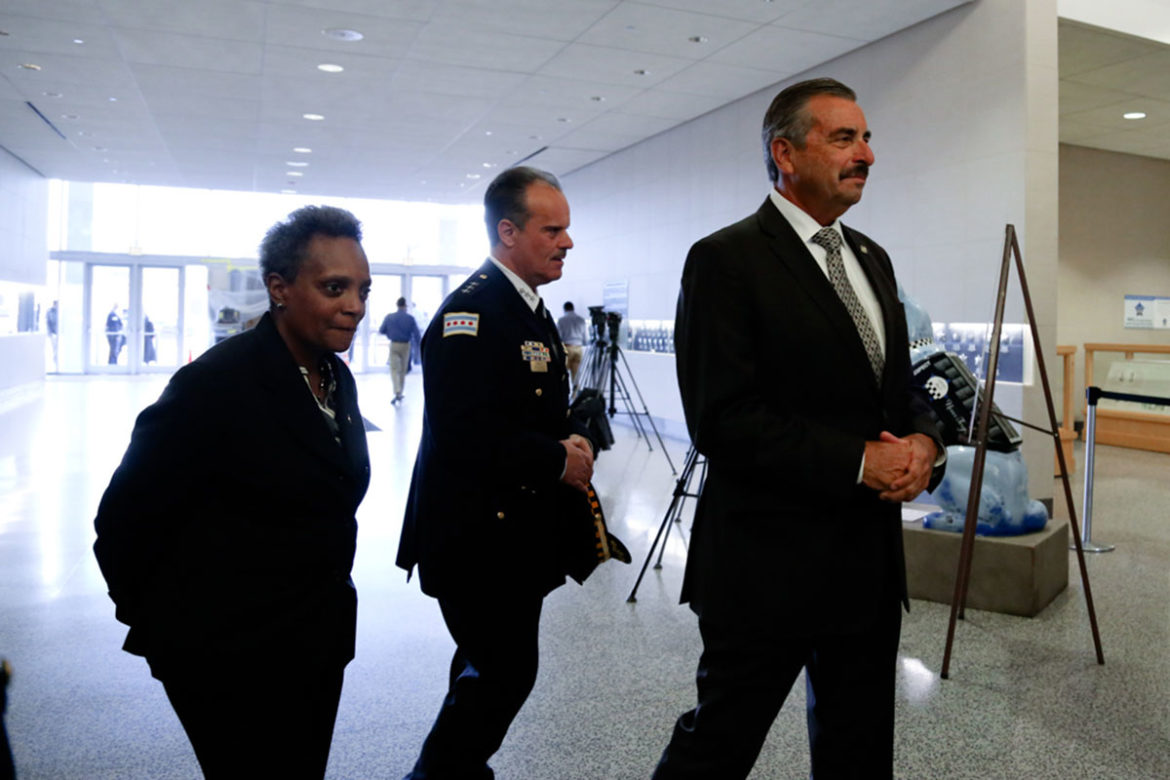 “Take it from us, you don’t want him,” the group said in an open letter to the city, which warns of the highest number of police involved shootings in the nation, targeted policing of Black and Brown communities and reconfiguring the LAPD with surveillance tools tested at war overseas.

While the LAPD has reduced its number of police-involved shootings since Beck’s retirement, they still lead the nation, according to the Los Angeles Times.

“Chief Beck embodies everything a White-supremacist would bring to Chicago to contain, control, criminalize, and cause grave harm to Black, Brown, and poor communities. All one needs to do is look beyond the scripted endorsements of former and current officers and politicians with aspirations of higher office to understand how truly dangerous Beck is,” the letter reads.

He ruled out the possibility of staying on beyond the interim period as Lightfoot downplayed the BLM critique on Friday.

“This is a guy who knows how to get something done,” Lightfoot said. “There’s always critics. It goes with the job. Join the club.”

Johnson became the city’s top cop during a “tumultuous time,” he said Thursday, taking over months after former Mayor Rahm Emanuel fired Superintendent Garry McCarthy in the aftermath of the release of the Laquan McDonald shooting video.

Johnson announced it was “time” for him to step down flanked by Mayor Lori Lightfoot and his family.

The 31-year-veteran’s retirement comes as he’s currently embroiled in an inspector general investigation after he was found asleep in his car blocks from his house. Following that announcement of the investigation, Lightfoot told reporters the superintendent had a couple drinks with dinner. That probe is ongoing, according to The Daily Line.

“It’s time for someone else to pin these four stars to their shoulders. These stars sometimes feel like carrying the weight of the world,” said Johnson referencing the stars noting his rank on his uniform. “I’m confident that I leave CPD in a better place than when I became superintendent.”

His three-year tenure saw efforts to reform the police department through a consent decree and efforts to institute improved police oversight.

“At the end of the day, under his leadership the code of silence remains alive and well. He’s made incremental strides … without rocking the boat,” said Futterman, director of the Police Accountability Project at the University of Chicago Law School, who stopped short of calling Johnson a reformer.

Johnson ran into “reactionary pushback from the FOP,” which held up some of the reforms, he said.

Earlier this year, Johnson drew criticism for releasing a “gun offender database” that advocates say blamed gun violence on bond reform by using dirty data. Critics also admonished his record of justifying police misconduct and shootings at the hands of police. And while crime is down in the city, the department is still vexed by stubbornly low clearance rates for homicides in lower-income communities of color.

At the conference, Lightfoot said she was recently informed of the superintendent’s intentions and would soon begin working with the department on plans for a smooth transition.

“I know that this is a tough decision for him, but a good day for his family, and we return him back to the loving arms of his wife and his children,” she said.

During the 40 minute press conference Thursday, Johnson took shots at the American Civil Liberties Union of Illinois, who helped change stop-and-frisk policies during his tenure, blaming the changes for a spike in violence “amid all the turmoil.”

The ACLU quickly responded to the retirement, saying Johnson took over during a time of “crisis and uncertainty” and that under his watch many of the department’s serious problems were exposed.

“Chicago needs vigorous, forward-thinking leadership that will bring real meaning and order to reform of CPD. The Department continues to lag far behind police agencies in other communities on curbing excessive use of force and building strong, meaningful relationships between the police and communities of color, said Karen Sheley, director of Police Practices Project for the ACLU of Illinois.

Recent reports from the ACLU have shown that while stop-and-frisk stops have declined 80% since 2016, Black and Latinx people still make up the vast percentage of those stops.

Black people made up 71.8% of the stops, rising .4% over two years. The number of Hispanic people stopped also rose about 3%, according to the statistics.

An earlier ACLU analysis of traffic stops showed just as the number of stop-and-frisks was on the decline, traffic stops in Chicago tripled. Black drivers accounted for the majority of this increase between 2015 and 2017.

“Chicago has a long way to go and needs a leader with a plan to transform the department,” said Sheley.

A  recent Los Angeles Times investigation of traffic stops between 2015 and 2018, which overlapped with Beck’s time as police chief, found the LAPD was pulling over Black drivers at a rate more than five times their share of the city’s population. Another Times investigation showed that the LAPD overall searched Blacks and Latinos far more often than whites during traffic stops, even though whites were found with contraband more often.

The investigation is forcing the LAPD to rethink and reform their crime fighting strategies.