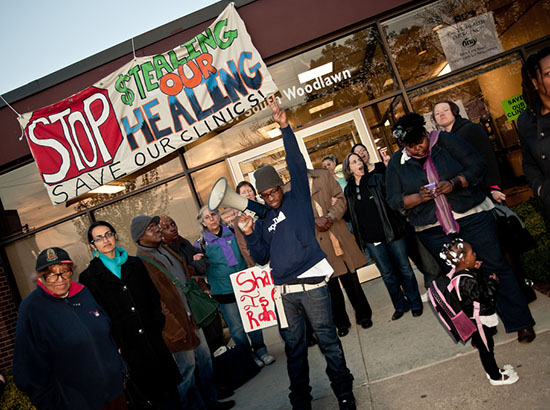 The Woodlawn Mental Health Clinic was one of six facilities the city closed in 2012 as part of a consolidation plan.

While Mayor Lori Lightfoot’s budget goes up for a vote on Tuesday — including a $9.3 million expansion in funding for mental health services — discussions with progressive aldermen over how those funds will be allocated continue, said 49th Ward Ald. Maria Hadden.

“It’s not about additional dollars,” she said. “The discussion is about what we prioritize and how we spend the money.” She said she hopes for a resolution before the vote but discussions could continue beyond that point.

The discussions have already yielded results, including city commitments to pilot evening hours in some city clinics, increase the Department of Public Health’s mental health staff by 14 (including psychiatric nurses and outreach workers), place city therapists in two Department of Family and Support Services community centers, and fund a feasibility study on city clinic utilization.

“We’re in agreement on a lot of things,” Hadden said — particularly that “mental health care is a core priority for our city.”

Lightfoot’s increase in mental health funding despite a huge budget deficit contrasts the approach of her predecessor, Rahm Emanuel, who infamously used a fiscal crisis to close clinics in his first budget.

Hadden and fellow Progressive Caucus members organized a letter to Lightfoot earlier this month signed by 39 aldermen which argued that the path to reaching hundreds of thousands of Chicagoans whose mental health needs aren’t being met “must begin with expanding the clinical capacity of the public mental health system, promoting [city-run] clinic services and exploring the establishment of new clinic spaces in communities with the greatest unmet needs.”

“Our CDPH clinics are the safety net where community members can receive free, long-term trauma informed care,” the aldermen argued.

They called for adding staff to cover evening and weekend hours at clinics, creating field-based therapist positions that could see clients in city facilities outside clinics, and study reopening clinics that were closed by Emanuel.

Along with funding for physical improvements to clinics and an already underway new electronic record system, the city’s budget proposal now puts 60% of mental health funding into city services and staff, acting health commissioner Dr. Allison Arwady said in a response to the aldermen.

Arwady has pushed back against argument that nonprofit providers, including Federally Qualified Health Centers (which receive federal grants in addition to Medicaid reimbursement), are inappropriate recipients of city funding. “We are lucky to have so many of them in Chicago,” she told me. “FQHCS are where the majority of low-income Americans get their health care.” They’re designed to be accessible and serve communities in need, she said.

If the goal is to ramp up services quickly, helping nonprofits that have waiting lists makes sense, she said, especially with city clinics operating under capacity.

Arwady also stressed the department’s new investments in its clinics. “I want our clinics to be successful,” she said. “I want to get to a place where we’re seeing so many more people that we have to think about expanding capacity.”

But Hadden also seemed to acknowledge the role of nonprofits, saying that her ward “has some great mental health providers.”

Utilization rates at city clinics are “rebounding” since they began accepting clients with insurance and on Medicaid this year, said Anders Lindall of AFSCME District 31, which represents clinic staff. “CDPH by policy was diverting patients away from city clinics for years,” he said. He added that a nonprofit hotline funded by the city “sends people to private providers.”

It’s “disingenuous” for CDPH to depict decreased caseloads “as reflective of anything but the department’s own policy decisions,” he said.

New funding is also going toward establishing three crisis response teams, Arwardy said. That’s a critical need, said Amy Watson, Professor in the Jane Addams College of Social Work at the University of Illinois at Chicago. She said the city should also invest in a crisis hotline, going beyond the referral service currently supported, with trained counselors taking calls and directing responses.

According to Watson, one of the biggest advantages of city clinics is that they “pay decent wages, which means they have stable workforces and can provide greater continuity of care.”

“We need to get some type of investment to make sure private agencies can pay staff well enough to keep them,” she said.

“This entire battle is taking place in the larger context of the state’s failure to provide adequate resources,” said Professor Harold Pollack of the School of Social Service Administration at the University of Chicago. “In a state with such progressive values, we really have to up our game when it comes to Medicaid reimbursements.”