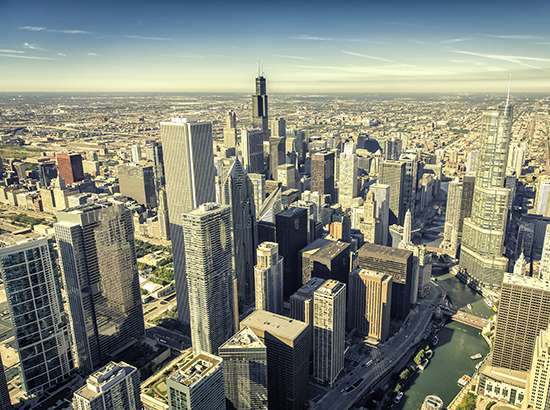 While cuts are being made to city workers' pensions, the number of corporations benefiting from tax increment financing continues to grow. [Photo by Marchello74/Shutterstock]

Mayor Emanuel’s new pension plan was rolled out with lots of talk about bravely facing challenges and sharing sacrifices. It does neither.

What it does do is cut retiree pensions — dramatically. Over 20 years, a retiree in the laborers’ or municipal employees’ systems will see a 20 to 30 percent reduction in the value of their benefit. That will put many moderate-income retirees at risk of impoverishment, especially since the subsidy for their health care is being phased out.

The systems’ unfunded liability will come down at first — mostly due to benefit cuts — then it will start rising again, under a payment plan that is “backloaded by design,” said Amanda Kass of the Center for Tax and Budget Accountability. Meanwhile, the plan for police and fire funds seems to be changing the law to postpone tackling their huge unfunded liabilities for several years.

Then there are five annual $50-million property tax increases planned for Chicago homeowners. “Everyone has to give something so nobody is asked to give everything,” Emanuel said.

One group not giving anything, though, are politically-connected corporations and developers who benefit from tax increment financing. A report from Good Jobs First reveals that for years, TIF diversions have”far exceeded” the city’s annual pensions costs. In 2012, total annual costs of benefits for the city’s four funds, plus those for teachers and parks workers, totaled $386 million. That year, TIF captured $457 million.

Responding to the study, a city spokesperson told the Sun-Times that “the city’s pension crisis has been building for decades — much longer than the existence of TIFs.”

Not true. GJF points out that in 2000, the year TIF diversions started taking off, the city’s four pension funds were nearly fully funded. Since then TIFs have “grown exponentially,” doubling by 2003 and quadrupling by 2007. Then the economy tanked. “TIF costs grew, general fund revenues declined, and the city addressed its budget gap in part by making inadequate contributions to public pensions,” according to the report.

“TIF has played a role in the underfunding of pensions in Chicago,” GJF concludes.

A pattern emerges if when you consider an earlier GJF report on the state’s pension crisis: the state of Illinois spends far more on corporate tax subsidies — at least $2.4 billion a year — than its annual pension costs of about $1.85 billion.

In this context, the alarms sounded by business leaders over the state’s credit rating and about Chicago as the “next Detroit” ring a little hollow. And the emphasis of the political establishment on cutting retirees’ benefits seems misplaced.

What could be done, if we had a different set of priorites? GJF points to California, where Governor Jerry Brown dissolved the authority of local governments to use TIF and began to unwind existing TIF districts. Ultimately, that will increase local property tax revenues by 10 to 15 percent.

County Clerk David Orr recently suggested that the city could increase property tax revenues by paring down existing TIFs, and that the state legislature could help by adjusting the tax levies “frozen” by TIF to account for inflation in order to increase revenues available for local taxing bodies.

There’s also the question of TIF surpluses. Emanuel has claimed the vast majority of TIF funds are committed and unavailable, but when Civic Lab and the Chicago Teachers Union submitted a Freedom of Information Act request to the city for documentation of the claim, they were told the request was too burdensome, said Tom Tresser of Civic Lab.

Orr called on Emanuel to carry out one of the several recommendations of his TIF Reform Task Force that remain unimplemented — auditing TIF districts. “Chicago officials say $1.5 billion of its $1.7 billion TIF fund is committed to projects, but the public has no way to judge whether each project is worthwhile without a comprehensive audit and open debate,” he said.

In Springfield, legislation that would close three major corporate loopholes and raise nearly $500 million a year seems to have stalled in the House and is struggling in the Senate, said Kristi Sanford of the People’s Lobby.

“The extent of corporate power in Springfield is incredible,” Sanford said. “It’s crazy that they would leave that much money on the table.”

For our political leaders, it seems, cutting retirement security and raising taxes is “tough,” but reducing public largesse for the top dogs of the private sector is impossible.