Tahesha Orji, a teacher’s aide at two elementary schools in Auburn-Gresham, works with 2nd- and 3rd-graders who are struggling in reading, writing and math. For years Orji longed to one day become a full-fledged teacher, but she didn’t know where to start.

Then Orji discovered Grow Your Own Illinois, a program that could help her make that dream a reality. She quickly signed on. The initiative, modeled after a program that started six years ago in Logan Square, provides teacher training for parents, community leaders and paraprofessionals who are already active in schools.

“I love the program because it will prepare me to go in and teach in a classroom that is all mine. That’s my ultimate goal,” says Orji, who is enrolled in an online college to obtain her bachelor’s degree in organizational psychology and will begin taking education courses this fall.

“I will have the experience and training to make sure students end up at the level they need to be,” she adds. “Who can better talk to a child from the neighborhood than an adult from that same neighborhood?” Orji plans to begin teaching within the next two years and hopes to become a school counselor as well.

Grow Your Own aims to solve the perennial problem of high teacher turnover in low-income schools. A study by the nonprofit organizing group ACORN (Association of Community Organizations for Reform Now) found that over three years, approximately 40 percent of first-year teachers did not return for a second year at 64 neighborhood schools in Englewood, Lawndale and Little Village.

After supporters of the program successfully lobbied state officials, Grow Your Own received $1.5 million in the governor’s 2006 education budget. The money will cover expenses for five neighborhood-based programs in Chicago, along with five more in other districts across the state.

“We want to help regular people in the community become powerful teachers,” says Anne Hallett, director of Grow Your Own Illinois. “It’s a community-based solution to a broader educational problem. Normally, you have teachers come, see the situation and run the other way. The people we’re working with understand the communities they’re working in, so you don’t have that problem.”

Grow Your Own was inspired by Project Nueva Generación, developed by the Logan Square Neighborhood Association. The project got its start with mothers who were working as parent mentors in schools.

“[They] were doing a great job in the classroom and brought a lot of understanding of the issues of bilingualism,” says Joanna Brown, director of education organizing for the Logan Square group.

“[They were saying] ‘I don’t want to go back to the factory or cleaning floors. I want to stay in the schools.'”

The association partnered with Chicago State University’s bilingual education department in 2000 and won a grant to start Nueva Generación, which helps parents and paraprofessionals obtain a bachelor’s degree and a bilingual education certificate. The project also provided tutoring for parents who needed extra help with math and learning English. Some classes were held in the neighborhood, and for those that were not, participants carpooled to campus.

Mutual support was key to keeping the participants—many of whom were working and caring for families—from quitting, says Brown. “If anyone thought of dropping the program or a class, they would get calls telling them, “Don’t do it, we’ll help you,” she says.

Several years later, the idea for Grow Your Own was hatched when the Logan Square group and other organizations were discussing ways to improve teaching. Project Nueva Generación “was a really great model and had a great retention rate, so we dove in headfirst,” Brown recalls. Local state Sen. Iris Martinez agreed to be chief sponsor of the bill establishing Grow Your Own.

In January, Grow Your Own came to Auburn Gresham on the South Side. Approximately 30 candidates are working together to become teachers in their local schools. Three other groups—ACORN, the Kenwood Oakland Community Organization and the Southwest Organizing Project—are working to develop programs throughout the city. Citywide, Grow Your Own hopes to add 1,000 new teachers to low-income schools by 2016.

Grow Your Own works by targeting low-income neighborhoods with a high need for teachers, then helping community organizations that have experience in education advocacy create partnerships with at least one school that is identified as “hard-to-staff” and one higher education institution.

“The program is like a bridge,” says Angelique Orr, executive board member for the Target Area Development Corporation, which participates in Grow Your Own.

Like candidates in Project Nueva Generación, students in Grow Your Own take some classes close to home, taught by a faculty member from a partner college or university, in space provided by community groups. Higher-level education classes are taken on campus. Tuition is paid through grants and loans that are forgivable if graduates teach in their communities for five years

“Some people cannot afford to attend school and the cost can prevent them from going,” says Mary Ann Peterson, an outreach worker for Target Area Development. “This helps them to not have to worry about that. They can just focus on getting their education.”

Attracting more teachers of color is another goal of Grow Your Own.

“It’s great for the schools because kids are gaining teachers who know how to deal with them, have high expectations and like the neighborhood and don’t have plans to leave,” says Madeline Talbott, head organizer of ACORN.

Evelia Mucino, a Logan Square parent who is participating in Project Nueva Generación, says it’s important to be a role model for other adults as well as children. “I have a big responsibility and they look up to me,” says Mucino. “For other parents within the community, when they see I’m in school to become a teacher, they are inspired.”

Emily Horbar is a Catalyst intern. E-mail her at editor@catalyst-chicago.org. 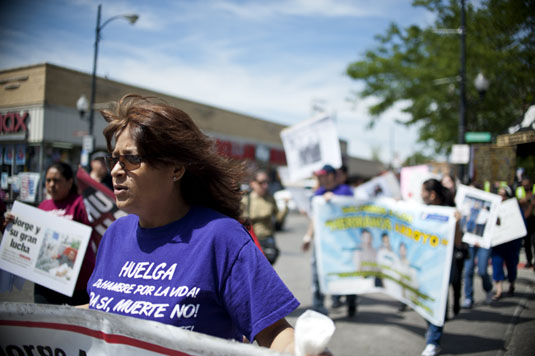 "I am here to fight for my son's life" said Lopez. "I am going to do whatever it takes, even if it means taking my own life."