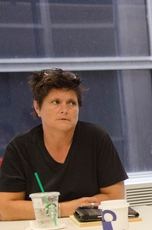 Kris Himebaugh, a 10th-grade English teacher and union delegate at Orr High School, says the social worker and the psychologist were laid off at her school.

CEO Barbara Byrd-Bennett has talked more passionately about reducing suspensions and expulsions than almost any other subject. And for the first time ever this year, the district is publishing school-level statistics on discipline.

Activists hope that shedding light on what is happening with school discipline will help expose problem areas so they can be addressed. They also hope principals will consider implementing alternatives to discipline that puts students out of school, especially black boys, who are disproportionately targeted.

But even activists who heralded the district’s new transparency and apparent willingness to confront the issue remain worried because money for restorative practices, such as peace rooms, peer juries or counseling, remains scarce.  Teachers, as a result, have few outlets to help them deal with problem behavior.

At Catalyst Chicago’s recent teacher roundtable, participants said they have gotten the message that schools should curb suspensions and expressed dissatisfaction with the practice. In order for students to improve academically, they need to be in class, they said.

However, the conversation quickly shifted from discipline to what emerged as the underlying concern: a lack of support for troubled students.

Here is what they had to say:

Monty Adams: Being at an alternative school, I always talk to the kids. Most of them you would never imagine had been kicked out of a public school. They are the nicest kids. I get to talk to them, find out why they were kicked out of school, for fighting or something. I can’t imagine doing that. I’ve even had kids kicked out of CPS because of numerous medical absences. These are the children we get. I want to keep teaching at the alternative school. I love it. But I don’t understand the rationale sometimes.

Hen Kennedy: We have definitely gotten that message to not expect [misbehavior] to end in a suspension. It is something I agree with. I don’t think suspension is particularly effective. I have heard grumblings. But I think [the grumblers] also don’t think it is the most useful solution. The catch is, I am not sure we’re being taught effective alternatives to suspension. I think it is important to not suspend kids whenever possible. But it is also important to have counseling or whatever to replace that.

Adams: This year we have a principal and a dean of discipline. It is so nice to be able to teach and, if there is a student you’re having a problem with who won’t be cooperative, just to be able to pick up the phone. That doesn’t come back and reflect poorly on me. In fact, I can tell a student it’s kind of out of my hands. “Just go and calm down and talk to somebody else.” A lot of times they do.

They come in with all kinds of emotional problems. They need counseling. They need somebody to cool down with. You can’t do that simultaneously with teaching.

Kris Himebaugh: That is another [effect] of the budget cut. Our social worker and psychologist both got cut down to part-time and you’re talking about Orr High School. You’re talking about kids who are in and out of jail, who see their friends, siblings, parents die on the streets. My students get shot and killed. And so we have a half-time social worker and psychologist?

Kennedy:  We’re lucky enough to have a phenomenal full-time counselor. I can’t even imagine how our school would function without it.

Amy Rosenwasser:  We don’t have a full-time social worker. There is a definite push being made [for a social-emotional program]. We had two days of training at the end of the school year and two more next week on The Responsive Classroom, which is supposed to be a way to deal with problems in the classroom. The paraprofessionals and security [workers] did not have to report to school on those days and so they did not have to receive the training. It requires everyone to be on the same page [yet] we only had training with the teachers.

There also has to be something in place for those kids that don’t respond to that. Maybe there is something that is going to be in place, but I think a lot of schools don’t have that.

Adams:  When I was in Waukegan, [administrators] would look at it almost in a punitive way, if you had trouble with one of your students in your classroom and had to call security or something like that. Having deans of discipline is a great solution. Being able to remove that responsibility (to discipline) from [the teacher] and let the dean deal with those issues–as a result, I had much better rapport with each student because I don’t have to get involved emotionally.

Jamie Cordes: In terms of suspensions, I feel very much like [Monty] was saying. We have a dean of discipline and a culture team, and if a kid is really disrupting the learning [environment], that’s who they go to. It won’t always lead to a suspension. We’ve got a social worker. We’ve got a culture team that is quasi-security, but building relationships with students as well. We are trying to pilot a peer mediation program for certain conflicts, like student conflicts, to get more student ownership in terms of the discipline policy. But there are some things that, according to our discipline code, trigger automatic suspensions, such as drug possession or fighting.  I want to keep my kids in school. If the kid can come back to my class and still learn, then great. If a kid is on the way out and is suspended, I want them to get work in their hands so they can come back prepared. We’ve got demerits and suspensions to use when necessary. Ultimately, we want kids in class learning.