More often than not, the first time social worker Rae Anne Alvarez learns that one of her elementary school students is weighted down with troubles at home is when the child is acting out at school. A classmate is hit or a teacher’s lesson is sabotaged when the classroom is constantly disrupted.

Earlier this year, for instance, a 2nd-grader at Von Humboldt Elementary in West Town was making loud noises and slamming his books on the classroom floor. Later, Alvarez learned that the youngster had good reason for his anger. His father was doing time in prison.

Now, Alvarez won’t have to wait until children act out to learn what’s hurting them. This school year, Von Humboldt joined more than 1,400 schools, faith communities and social service agencies in Illinois that use Rainbows, a curriculum designed to help grieving children.

“As a social worker, I often don’t learn about these kids until they’ve done something,” Alvarez says. “With Rainbows, if you start at the beginning of the year, you can do some concentrated intervention.”

In Chicago, Rainbows lists 14 CPS schools among those using its curriculum and says those sites serve approximately 350 children. It has expanded throughout the United States and to other countries such as Australia, Canada, England, Hong Kong and Japan.

The grief children experience might result from the trauma of having a parent in prison, as was the case with Alvarez’s 2nd-grader, or from the death of a parent, a divorce, or as is more and more common, witnessing a shooting or murder. Recently, Rainbows was used in the Gulf Coast region to help children cope in the aftermath of Hurricane Katrina.

“We believe that [grieving] obviously affects their ability to concentrate on academic learning,” says Alvarez, who has been a social worker at Von Humboldt for six years. “If their mind is preoccupied with emotional trauma of some sort, it’s going to be next to impossible to achieve academic success in the classroom.”

However, Nicole Ross of Bradwell Elementary in South Shore says she no longer uses the program.

“Rainbows didn’t really fit my needs here,” says Ross, noting that the exercises did not resonate with children there. “I’m in a hard place.”

Children volunteer for Rainbows, but must get consent from a parent or guardian to participate. Sessions are led by a social worker and volunteer teachers and are held several times a week, mostly after school hours when teachers are officially off the clock. Teachers work with the children in small groups on activities like journal writing and arts and crafts projects. Recently, at Von Humboldt, students cut out pictures from magazines that best described themselves and their surroundings and created a “mobile of me.”

The key to Rainbows exercises is getting children to unlock bottled-up emotions, like the “uncertainty of not knowing when a parent is coming back or the shame associated with parents committing a crime,” Alvarez says. Family incarceration is “the elephant in the room” that nobody mentions, she adds. “Everybody can see it, but it’s a taboo subject.”

Born out of founder’s own experience

The seeds for Rainbows were planted in 1976 when founder Suzy Yehl Marta was going through a divorce. She was concerned about the effect the break-up was having on her three young boys.

“When I was going through my divorce, everyone said to me, ‘Kids are resilient, they’ll bounce back,'” Marta says. Later, she realized that “my divorce was the death of a marriage and the death of a nuclear family.”

After arranging retreats for other families experiencing death and divorce, Marta formalized the program and in 1983 opened Rainbows in three schools in the Chicago area. Rainbows, which initially focused on children dealing with death and divorce, quickly spread.

About two years ago, Marta became interested in working with children whose parents were incarcerated after meeting with advocates who worked with former inmates trying to reenter society in Detroit.

She soon realized that there was another population of children grieving for absent parents: those whose parents are in prison. “In the center of this scenario [are] angry, hurting, scared—almost homeless—children,” Marta says. “They’re all grieving, and to my knowledge no one is addressing that in a systematic way.”

Last year, Rainbows received a $7,500 grant to tailor its curriculum for three elementary and middle schools in south suburban Harvey to work specifically with children whose parents are incarcerated.

“A lot of our kids have parents or relatives who are incarcerated,” says Helen Randall, the community education manager for Harvey District 152. Two other elementary schools in Harvey, Whittier and Sandburg, also recently began using the program.

‘You have to understand the kids’

Von Humboldt Principal Christ Kalamatas learned about Rainbows a year ago when former CPS Chief Instructional Officer Domingo Trujillo asked if his students needed it. Trujillo referred Kalamatas to Marta, who subsequently visited the school and helped them get a grant from Northern Trust Bank to cover the costs.

The first-year tab for Rainbows, which includes training and instructional materials, is $5,500. A minimal fee is charged for subsequent years.

Rainbows is available to all students at Von Humboldt. Most of the 17 students participating this year are there because a loved one has died or a parent has been incarcerated, Alvarez says.

Virtually all of Von Humboldt’s students are poor, just over half are Hispanic and about 42 percent are African-American.

“To be a successful teacher today, you have to understand the kids and what they’re dealing with,” Kalamatas says.

With so many demands on teachers and so little time outside of class (even recess has been eliminated at Von Humboldt), there are limited opportunities for teachers to tap into what children are experiencing at home, he adds.

For more information about Rainbows and group therapy programs for loss, contact Jessica Stanczak at (847) 952-1770. 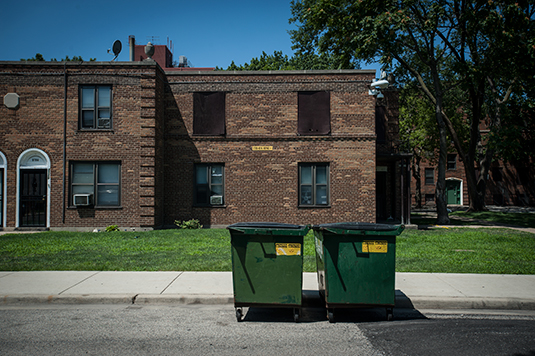 Although all of Lathrop's families have been moved to the section of the complex that lies along Diversey Avenue, many units there still sit vacant.