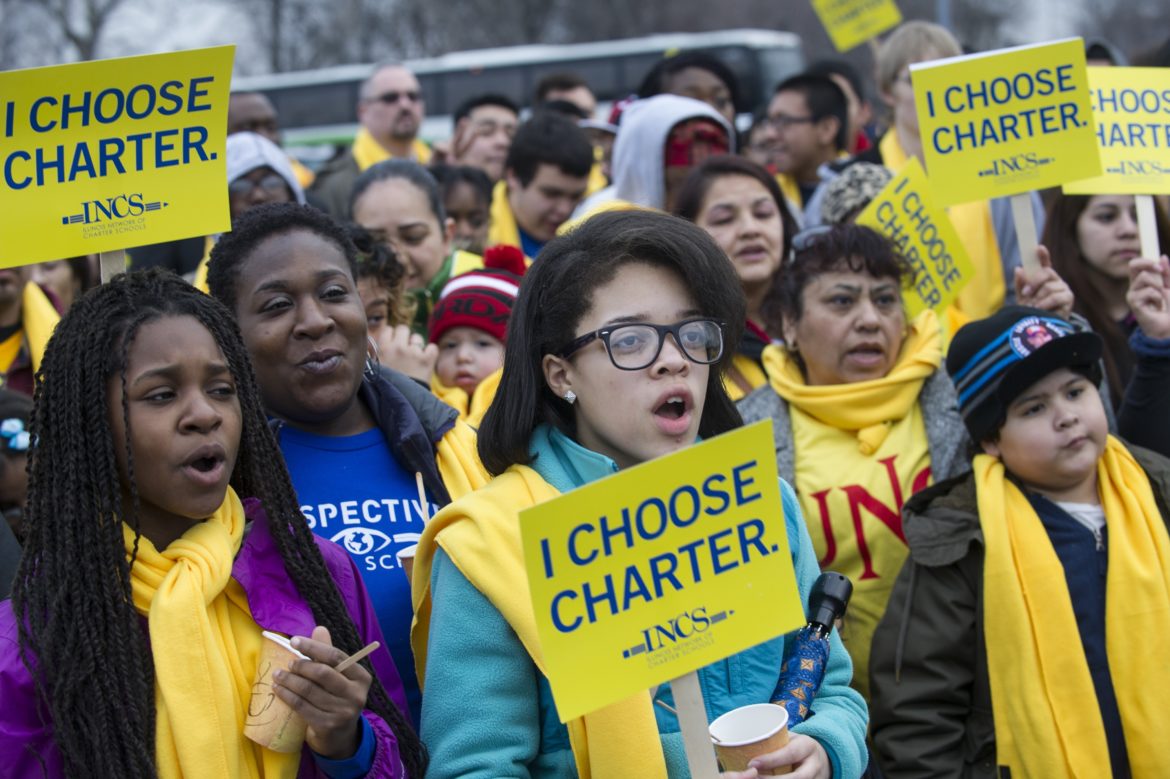 More than 1,000 charter school supporters gathered on April 2014 for a quick rally before heading to Springfield.

Despite a push by North Side principals, elected officials and others against a proposal to relocate the Noble Street Academy to Uptown, Chicago Public Schools is recommending that the Board of Education approve the move anyway.

And much to the dismay of activists, the district also wants the board to OK a proposal from Rowe Elementary charter school to expand to the site once occupied by Peabody Elementary. In the wake of the historic 2013 school closings in Chicago, CEO Barbara Byrd-Bennett had repeatedly promised to keep charter schools out of closed schools.

“This opens a potential Pandora’s Box,” says Valencia Rias-Winstead, who was part of the Chicago Educational Facilities Task Force. “If you go back on your word for one school, then you’ve got to give it to all the others.”

CPS officials did not comment Friday afternoon on the recommendations.

The Noble and Rowe petitions are among more than two dozen proposed modifications or renewals for charter and contract schools that the district is recommending for approval at this Wednesday’s Board of Education meeting.

Principals and others protesting the Noble proposal fear a charter school would siphon off students from neighborhood high schools and say that the area doesn’t need another high school.

“I realize this charter thing is going to happen, but are you really choosing the neighborhoods where the schools are needed?” asked Chad Adams, principal of Sullivan High in Rogers Park. “I feel like the reason they’re doing it is more of a long-term strategic, budget move that none of us quite understand what’s actually behind it.”

Noble Street officials have told Catalyst they don’t think a new school in the area would impact enrollment at any one specific high school significantly.

Shorter renewals for some

CPS is also recommending renewals for all 14 charter and contract schools whose agreements are up this June. However, only half of the schools are being recommended for five-year renewals, the length most schools have typically received in years past. The district is using shorter renewals as a way to hold privately-run schools accountable for academic performance and financial stability.

The district wants to give three-year renewals to six of the remaining schools — and is asking for additional terms such as improved academics or finances.

And one school — the Joshua Johnston Fine Arts and Design Charter — is being recommended for just a single-year extension. The district wants the alternative high school in the Englewood neighborhood to improve by at least one notch on the district’s accountability system, in addition to stabilizing its finances.

Pa Joof, the school’s principal, says the School Quality Rating Policy doesn’t fully capture the successes he’s seen at Johnston. The metrics included in the SQRP for alternative schools are snapshots in time, he says, and ignore the fact that many students float in and out of the school.

“During the five years we have been in existence, we have graduated 176 kids who otherwise would be in jail,” Joof says. “That’s a success. The kids that come to us are on the streets, are homeless. Why are they giving other schools three years and not us?”

Meanwhile, two of the three Urban Prep campuses — West and Englewood — are slated for three-year renewals. Only the Bronzeville campus, which last year earned the second-highest rating under the five-tiered SQRP, is being recommended for a full five-year renewal.

The renewals for all three Urban Prep campuses are contingent on improvement on two metrics on its financial scorecard. These include its audits on legal compliance and its liquidity ratio, which measures the ability to pay off debt.

As part of the recommended renewal for ChiTech, CPS says the school’s “Academic Excellence Committee must continue to provide oversight and support for the term of the agreement.” In addition, ChiTech has to provide the district minutes of the committee’s meetings as proof that it’s working toward improvement.

Galapagos, meanwhile, is being given two years to make substantial renovations to its buildings. These include repairing or replacing boilers, water lines, the ventilation system, and installing sufficient exterior lights for safety precautions.

No additional conditions are being applied to Epic, a charter high school that had been placed on a warning list in 2013 but made sufficient improvements to come off the list last fall.

The district is recommending a five-year renewal of the Youth Connection Charter Schools network — in addition to 301 new seats at its alternative schools. Last year YCCS executive director Sheila Venson spoke to Catalyst about the years-long struggle to increase enrollment at the schools and her disappointment in the district’s expansion of for-profit alternative schools. Venson could not be reached for comment last Friday.