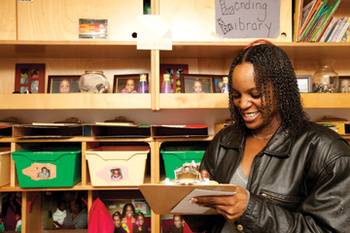 An Educare parent fills out a daily form with information on the health of her 3-year-old twin daughters. The form provides a regular avenue for communication with teachers. File photo by Jason Reblando

— I﻿n both preschool and 3rd grade, students scored higher than the national average on measures of social-emotional learning.﻿

— On a﻿ vocabulary test, students scored slightly lower than the national average but did just as well, compared to other students nationwide, as they had in preschool.

— Fewer than half of the students who received special services at Educare still needed those services in elementary school.

﻿A report on the study appears in the journal Early Education and Development.The findings were presented this week by Ounce of Prevention.

A hallmark of the Educare program is a focus on helping parents find the best elementary school for their children, as well as helping children make a successful transition into kindergarten.

Portia Kennel, senior vice president of program innovation at the Ounce of Prevention Fund, says the experience of participating in Educare sets up families to continue building social relationships and accumulating “social capital” after they leave the program.

“We are creating a culture of parents who are armed out there to make sure their child gets the best education, and see themselves as responsible,” Kennel says.

The study also found, however, that some parents have struggled with schools that don’t value their input – and with helping students with homework once it gets more complicated.

Parents of Educare graduates, Kennel said, have now started an alumni network to continue the support they received in the program.