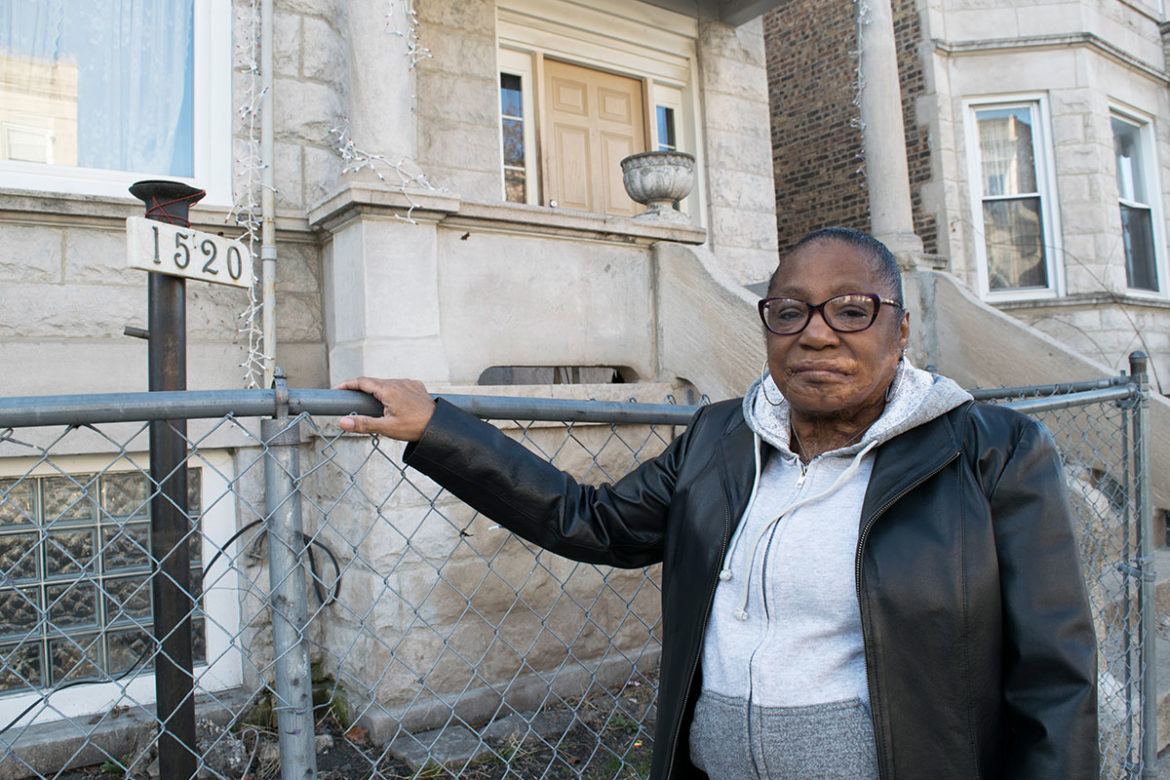 Gloria Muldrow stands in front of her family home on the West Side. Her mother Lillie Williams bought the house in 1973 but nearly lost it when she fell victim to a reverse mortgage scam in 2009.

Last summer was tough for Gloria Muldrow. Her elderly mother and family matriarch, Lillie Williams, was facing the end of her life as she battled diabetes and high blood pressure.

Beyond age and physical illness, Muldrow believes, depression and a broken heart contributed to her 89-year-old mother’s eventual death. Her mother feared that the family homestead and sanctuary in North Lawndale would be lost as the result of a reverse mortgage scam orchestrated by Chicago businessman Mark Diamond.

Lillie Williams died on July 19, 2016. A little more than a week earlier, Cook County Circuit Court Judge David B. Atkins had ordered Diamond to pay more than $2.3 million in restitution to 47 victims, including $107,000 to Williams. The Chicago Reporter has been reporting on the Diamond mortgage scam, including Williams’ story, since 2015.

Muldrow and the other victims have yet to see any of that money. And although Muldrow and advocates for the victims feel a sense of vindication from the judge’s order, there is concern that time is running out for the elderly African Americans targeted in the scam, who may never recover any of the money they lost.

Still, Muldrow and others are determined to recoup the money for the victims’ descendants, many of whom live in homes passed down through the generations and stand to lose hard-won family wealth if their homes are lost because of the scam. The repayments ordered by Atkins range from $4,000 to $107,000.

“I promised my mother that no matter what, I will continue to fight to get justice for what he did to her, and not only to her but to other people too,” Muldrow said.

Illinois Attorney General Lisa Madigan’s office has upped its battle on behalf of the victims by trying to tap into Diamond’s assets and property. Madigan has issued citations – similar to subpoenas – to banks, title companies, family members and the estate of Diamond’s wife, according to Madigan spokeswoman Maura Possley. But getting any money from these efforts will take time.

“It is deplorable that he got away with his scheme for so many years,” Madigan said in a statement this week. “We have prevented additional people from losing their homes and savings to one of Diamond’s reverse mortgage scams, and my office continues to pursue restitution for those who have already lost so much.”

In January 2016, Atkins ordered Diamond to pay a civil penalty of $340,000 for violating the Illinois Consumer Fraud Act by misleading elderly residents into signing reverse mortgages and agreeing to have repair work that was shoddy or never completed. Victims unknowingly signed for loans and were liable for insurance and other fees they could not afford. In many cases, Diamond provided victims only a fraction of the loan proceeds. Diamond was named in dozens of previous lawsuits.

Diamond has never been criminally charged in connection with the scam, but has been banned from doing business in Illinois. Diamond has been in Madigan’s sights since 2009, when the attorney general filed a complaint on behalf of dozens of elderly black homeowners who alleged that Diamond and other mortgage and home repair companies had stripped nearly $1.3 million in equity from the homeowners.

Muldrow is not the only family member forced to wrestle with the consequences of the fraud. Another story that came to light recently is that of Barbara Herron, the daughter of victim Effie Herron. Barbara Herron narrowly escaped eviction from the North Lawndale home she inherited from her mother, who died in 2013.  Her mother had entered an arrangement with Diamond to have work done on the home. After her mother signed a slew of papers to have Diamond do the work, he disappeared from the scene. Then came the letters, court summonses and eventually sheriff’s deputies at her door.

Rev. Robin Hood, a community organizer and founder of the Illinois Anti-Foreclosure Coalition, got the media and Madigan’s office involved. Foreclosure proceedings are now on hold and Barbara Herron remains in her home, where she is raising her 15-year-old great-nephew. With help from Madigan’s office, Herron is now working on a solution with the mortgage company.

Early on, when Muldrow’s suspicions were growing about Diamond, she reached out to Hood, who is also her cousin. Hood had been hearing more and more rumblings about mortgage scams on the street and he and Muldrow began connecting the dots.

But Hood’s concern reaches far beyond his family. He thinks the victims named in Atkins’ July order represent a much larger problem.

“The reality is that in neighborhoods and communities like ours, you’re going to find that 99 percent of the people who took out reverse mortgages had no clue that’s what they were doing,” said Hood. He believes there could be more elderly victims of Diamond and other predators throughout the Chicago area, perhaps in the thousands.

Hood said he was particularly upset by the mortgage and repair schemes, not only because his aunt was a target, but because predators went after society’s most vulnerable people.

“It’s targeted toward poor, [mostly] women of color who are basically at the end of their lives,” Hood said. “So yes, I’m angry about it.”