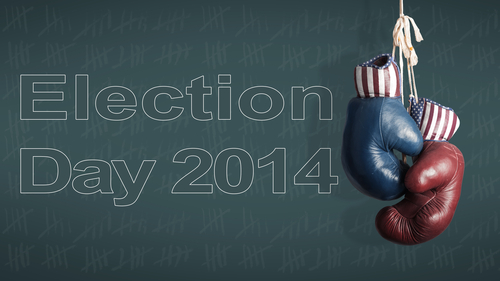 Lost in all of the Illinois gubernatorial campaign noise are some important issues. [Shutterstock photo]

As the campaign for Illinois governor demonstrates conclusively, one thing large amounts of money can’t buy is a high-performing democracy.

The race between Pat Quinn and Bruce Rauner is mainly an air war. Spending on TV commercials is up 30 percent over four years ago, according to the Center for Public Integrity, putting Illinois among the top four most expensive elections this year.

It’s the no-holds-barred age of Citizens United, which has brought opposition research to the fore, overwhelming serious discussion of issues and benefiting TV broadcasters’ bottom lines more than anything else.

Let’s stipulate that both candidates have headed large organizations which have come under investigation for shady and corrupt practices; both claim to have had no direct role in such activities; both bear the responsibility of being ultimately in charge.

Lost in all of the noise are some important issues.

On pensions, which you might expect to be hotly debated, we hear very little. That’s because neither candidate has a viable solution to offer. Quinn is touting “reform” legislation with benefit reductions that are almost certain to be ruled unconstitutional. Rauner proposes switching to 401k-style plans — good for investment firms, bad for retirees — that would not reduce the state’s annual pension costs and, by eliminating contributions from current workers, would make the outlook for the $100 billion unfunded liability far, far worse.

And while the candidates present two very different visions for addressing the state’s fiscal crisis and boosting economic recovery, discussion is largely limited to sloganeering — perhaps because there are gaps in each side’s arguments.

Coming into office at the height of a huge recession, Quinn pressed for a permanent income tax hike and got a temporary one, and he cut the state’s $10 billion backlog of unpaid bills in half. He also cut spending by $5 billion — which didn’t help the state’s recovery — while adding hundreds of thousands of construction jobs rebuilding roads.

He says Illinois has added a quarter of a million jobs since 2010, but the state’s recovery has lagged the nation’s. While unemployment is down dramatically over the past year in Illinois, the number of workers in jobs is also down by nearly 50,000 in the same period. The reasons for that are complex, and state fiscal policy is not the biggest factor, but he wears the jacket.

Still, he has a plausible economic program. It hinges on maintaining current income tax levels and includes property- and business-tax relief and increased tax credits for low-income families. This would reduce the regressivity of the state’s tax system somewhat, and it would allow an expansion of state funding for education, moving the state toward reducing its overreliance on property taxes for funding schools.

Quinn also supports replacing the state’s flat tax with a progressive income tax, like most other states — ultimately the only realistic solution to the state’s structural deficit. (Indeed, the Institute on Taxation and Economic Policy lists Illinois as one of the 10 states with the most regressive tax structure — high taxation levels for their poorest residents and low levels for the richest.) That’s probably not going anywhere while House Speaker Michael Madigan rules the legislature.

Rauner also promises major increases in education spending — while reducing income tax revenues by billions and simultaneously freezing property tax rates. He advocates expanding the sales tax to include services and promises “efficiencies,” but that doesn’t come close to covering revenue lost under his plan. For the rest, he’s counting on an economic “boom” that will result from cutting taxes and implementing “right-to-work” zones without unions.

Fully implemented, Rauner’s fiscal policies would nearly double the state’s deficit to more than $12 billion by fiscal year 2016, according to the Center for Tax and Budget Accountability. Even the most optimistic job growth levels would barely ding that number. The center warns that while tax cuts have a stimulative effect, when they are financed by spending cuts, that economic impact is neutralized.

Right now this approach appears to be failing in Kansas, which, according to a Washington Post editorial, “is rapidly becoming a cautionary tale for conservative governors elsewhere who have blithely peddled the theology of tax cuts as a painless panacea for sluggish growth.” After eliminating the top income tax bracket and exempting a big chunk of business income in 2013, Kansas saw the pace of new business creation fall, while job and income growth trailed the national average and economic growth has been far slower than neighboring states.

This isn’t a new phenomenon. In the 1990s, according to the Center on Budget and Policy Priorities, the six states that slashed income taxes most heavily saw slower growth than the rest of the nation.

Now the tax cuts in Kansas turn out to be bigger than anyone thought: income tax revenues are coming in at about two-thirds what was expected. The state’s deficit is exploding, and its bond rating is taking hits. Local schools and higher education have seen big budget cuts, and more cuts are now inevitable.

America at all levels has been “cutting taxes” — that is, increasing the proportion paid by middle- and low-income earners — since the late 1970s, and we’ve been rewarded with skyrocketing wealth at the top and stagnation for the rest of us. Getting rid of unions hasn’t helped.

That’s another area where differences between our two candidates are muddied. Quinn has not been a friend of public-sector unions, unilaterally canceling a contractual raise, laying off thousands of workers and pushing a plan to cut pensions.

On Rauner’s part, his hatred of those unions is visceral. When he talks about reform, item one seems to be reducing the collective bargaining rights of state workers. He’s clearly part of a national movement of conservatives to eliminate union representation in its last remaining stronghold. Add in his “right-to-work” proposals, and his vision of economic recovery is one in which working people get the crumbs.