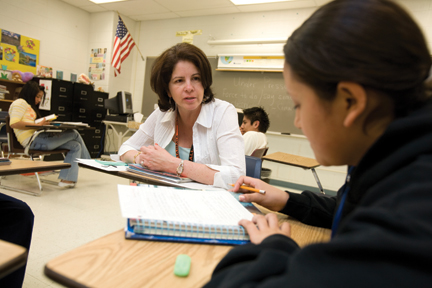 At a school board meeting in May, principals of the five high schools in Elgin Unified District 46 read the names of the 60 seniors with the best grades and their plans for college. Robert Flynn will study political science and economics at Augustana College. Sarah Ko will study chemistry at the University of Rochester in New York. Ravi Khadiwala will study economics and math at the University of Illinois in Urbana-Champaign.

The students who cross the stage to receive their awards are a steady stream of white and Asian students, with few Latinos and African Americans. It is an uncomfortable sight for a district that continues to fight a 2005 lawsuit charging that it has steered blacks and Latinos to overcrowded schools and weak bilingual programs.

Illinois’ second-largest district, Elgin U-46 is going through an extended bout of culture shock. Like several older, industrial areas in the Chicago metropolitan area, the communities it serves—11, due west of Chicago—have seen an influx of low-income Latinos. During the 1990s, the student body was predominantly white, but changing fast. Today, the district is one of the most diverse in the state, with no majority racial or ethnic group.

Yet, as in most districts, Latinos and blacks trail their white and Asian peers academically. And unlike Chicago, Elgin U46 makes comparatively little progress with its students of color. For example, 35 percent of Chicago’s Latino 5th-graders scored above the median on state reading tests in 2004; three years later, when most of these students were in 8th grade, 42 percent scored above the median. In Elgin, the percentage fell—from 36 percent in 5th grade to 31 percent in 8th grade. African-American scores were also flat in Elgin, but jumped 10 percentage points in Chicago.

Elgin’s high schools do a much better job than Chicago’s, however. In Elgin, nearly 80 percent of Latinos and African Americans graduate; in Chicago, only 65 percent do, among the worst records in the state.

This mixed pattern repeats itself in other industrial towns like Waukegan and Aurora, where working-class Mexican-American families have firmly taken root. These families have been attracted to growing job centers with affordable housing and access to the region’s booming service-sector jobs, says Richard Greene, a geographer at Northeastern Illinois University.

Elgin is now five years into a concerted effort to close the achievement gap through a variety of curriculum and management reforms, undertaken in part due to pressure from the No Child Left Behind Act.

Similar efforts are well underway in the city’s schools, too, which have a much longer history working with at-risk children. Indeed, Elgin’s new superintendent designate—the board is still negotiating his compensation—comes directly from Chicago. The selection of Area 14 Instructional Officer Jose Torres is one of Elgin’s most visible efforts to “embrace diversity as a strength,” as district spokesman Tony Sanders puts it.

When asked about Elgin’s lagging scores, Torres flashes a bright smile and says, “Not for long.” Under his two-year leadership, schools in Englewood, one of the poorest neighborhoods in Chicago, saw the percentage of students who met or exceeded state standards inch up by three points.

Torres, who is Puerto Rican, pitches himself as a convener who learned the ropes in a variety of diverse urban districts, from California to Maryland. For example, he is asking each school to hammer out a communication plan to bring parents on board as full partners. He also promises to work closely with teachers and other school leaders to raise student expectations.

Other priorities, Torres says, include beefing up professional development for teachers and establishing clear lines of accountability for school leaders.

Despite the challenges, Torres is walking into a situation that has changed dramatically since the early 2000s. Besides the lawsuit brought by African-American and Latino parents, Elgin faced controversy in the superintendent’s office and red ink in the budget. Now, besides closing the books on a deficit, the district has received nearly $3 million from the Northern California-based Stupski Foundation, to support improvement planning.

Among the changes: the installation of a data-management system to help keep tabs on student achievement, and the adoption of benchmark assessments in elementary reading and math courses. Special education and bilingual programs have been retooled.

This year, the district has expanded its search for bilingual teachers by participating in a state-funded program that recruits teachers straight from Mexico. (The number of English-language learners in Elgin has doubled in the last 10 years.) And the board will expand diversity training for teachers and administrators to help meet the needs of minority students and other subgroups singled out in NCLB.

Elgin has also introduced a measure of school choice in its high schools by developing small academies for gifted students.

The centerpiece of district reforms has been the development of a “curriculum road map” aimed at aligning lessons with state learning standards. It was piloted in the 10 schools that failed to meet NCLB targets in 2003, and has since been expanded into all schools. This year, the road map addressed history and civics courses in high schools, where minority students are also being encouraged to take more rigorous courses, including Advanced Placement and higher-level math courses.

Notwithstanding the changes, five black and Latino families continue to challenge the district’s treatment of their children. They say the district should revamp attendance boundaries and other policies, to relieve overcrowding in schools that enroll a predominantly minority population. Further refinements to bilingual programs are also needed, they say. The lawsuit alleges that a redistricting plan led to the closure of one school that had a naturally diverse student body and helped alleviate overcrowding.

Ashley also notes that consultants hired by the district to conduct an audit of gifted programs found they needed to be more diverse. An audit by the state board found problems with the bilingual program.

Striking a positive note, Torres says, “We’re on the right track, but we need to go deeper. We have to have the will to bring changes about.”