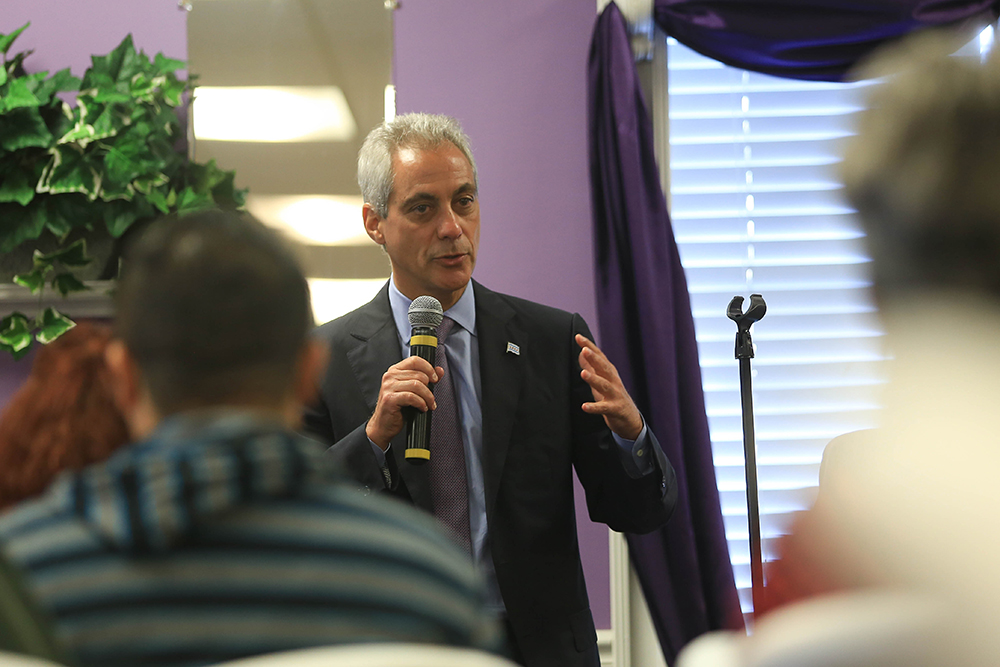 Mayor Rahm Emaneul speaks at the Greater Harvest Church in Bronzeville in September 2014 to thank pastors for their commitment to keeping students safe through the Safe Haven program.

If elected to a second term, Mayor Rahm Emanuel promises that within three years the graduation rate will go up by 15 points to 85 percent, the number of preschool classrooms will triple to 300 and the senior year of high school will be redesigned to include internships and 6,000 students taking City College classes to earn college credit.

Emanuel also plans to bring back Freshman Connection, a program that was designed to help incoming ninth-graders acclimate to high school; and give principals at good schools freedom from some district mandates. Both these ideas were in place under former Mayor Richard M. Daley.

Emanuel, who spoke to an invitation-only group of educators, parents and others on Thursday, said he will be leaning on private funders to pay for Freshman Connection, the same approach he took to offer principals merit pay. When that $5 million runs out this year, the principal bonuses may end.

After Emanuel’s speech, CEO Barbara Byrd-Bennett said that instead of merit pay, principals will get more independence. “This is what they want,” she said.

In Emanuel’s speech laying out his prospective second-term education agenda at the Chicago Cultural Center, he did not address any of the more controversial issues that have been part of his first-term agenda. Both of Emanuel’s chief rivals, Ald. Bob Fioretti (2nd) and Cook County Commissioner Jesus “Chuy” Garcia, have said they will continue the moratorium on closing schools and will put a halt on opening more charter schools.

Emanuel told the crowd, which included advocates from organizations such as Stand for Illinois, that closing schools was something he did not want to do, but that he needed to get students out of failing schools. Further, he said the debate should not be between charters and neighborhood schools, but rather between quality and lack of quality in any school. He did not say whether or how many charter schools he will open in the next term, nor did he say whether he will close more schools. He instead focused on his plans to continue investing in neighborhood high schools by making sure each student lives within three miles of a school with a specialty, such as International Baccalaureate curriculum; a science, technology, engineering and mathematics program; or career and technical education.

Fioretti noted that CPS recently put out a Request for Proposals for new schools. He said Emanuel does not understand that CPS already has enough choice.

As far as paying for his ambitious plan, Emanuel is expecting Springfield to come through with more money–though the state is in dire financial straits–and said he has a better argument for doing so than his predecessors, who had to convince lawmakers that a low-achieving school district needed more resources. Emanuel said he will be able to say that Chicago is going up on every measure, despite not being supported financially.

“We are not falling short anymore,” he said. In recent years, the graduation rate has increased to 69 percent, ACT scores rose and more than double the number of students came to kindergarten ready to learn, according to a random sample of kindergarteners given a readiness test.

When Emanuel was young his parents put his and his brothers’ report cards on the refrigerator, the mayor recalled. “We can post the city’s education report card on the civic refrigerator,” he said.

Not only does Emanuel think Springfield should provide schools more money given that Illinois has one of the worst track records for funding education, but he also rallied against the current pension funding system. Currently, Chicagoans pay for the Chicago teachers’ pension through the property tax and then pay for the pensions of all teachers in the state through the income tax. “The inequity must end,” he said.

Fioretti took issue with Emanuel’s numbers, saying the mayor was massaging the numbers and that they don’t ring true with people when he goes out to the community. Fioretti especially said that schools that took in students from closed schools remain in bad shape. Calls to Garcia’s campaign and Willie Wilson’s campaign were not immediately returned.