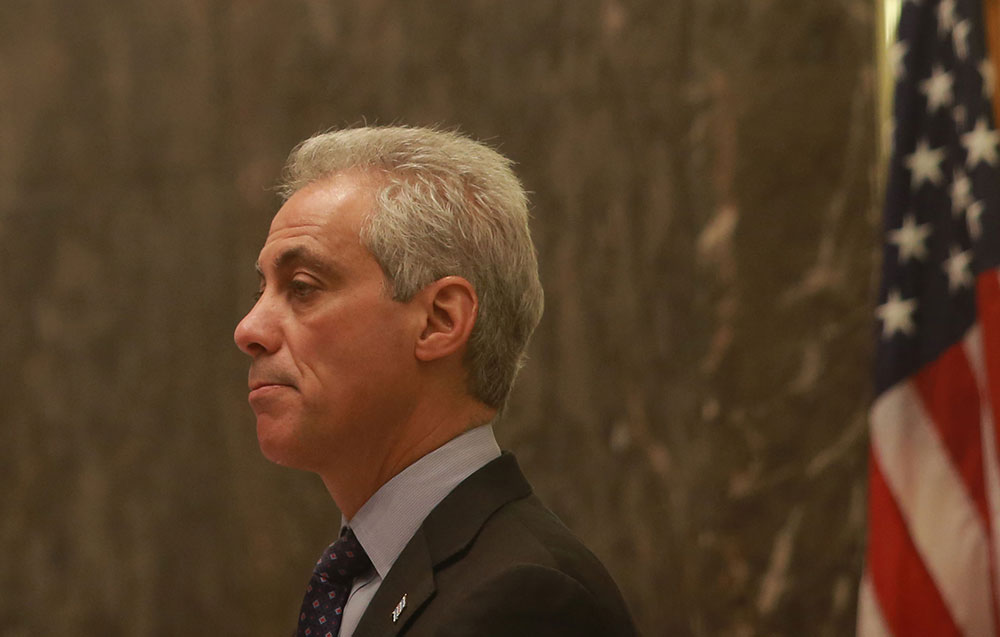 But their timing was unfortunate. Their announcement came as Emanuel’s leadership was falling far short on two key issues of racial justice – one with deep roots in Chicago’s history, the other reflecting the worst of Emanuel’s own record.

Emanuel’s naming of African Americans as budget director and water commissioner wasn’t insignificant.  Shortly after Emanuel’s first election, black aldermen complained about what one called “the dearth of African-American professionals on his current team.” (Emanuel’s too-cute response was that he looked at “diversity of experience” and “diversity of results.”)

He’s doing somewhat better at hiring blacks now, and that’s good for the city.  But it’s also in the mayor’s own self-interest to have African Americans, like former schools chief Barbara Byrd Bennett, take the fire for his unpopular policies like the closing of schools in black neighborhoods.

This year, Emanuel had State Sen. Kwame Raoul and Police Supt. Eddie Johnson out front on legislation increasing sentences for repeat gun possession convictions.  Johnson actually made the incredible claim that the law would reduce gun violence in Chicago by 50 percent in the first year.

Chicago Urban League President Shari Runner was among many with a different view, arguing that because it “targets people possessing guns, not shooting guns,” the legislation will not reduce violent crime, and instead will only lead to more black people in prison. The costs of such policies to the state budget are huge. The costs to Chicago’s communities are incalculable.

The bill passed after Republicans tweaked it to remove some sentencing reforms recommended by Gov. Bruce Rauner’s criminal justice commission and to add a diversion program that was apparently designed to be as small as possible.

But it provoked a furious debate in the House, with Black Caucus members bringing up the lack of progress on police reform and at least one calling the bill “racist.”

That’s a fair assessment.  The bill is a continuation of the politically-motivated “tough on crime” policies Emanuel spearheaded during the Clinton administration, which “resulted in the largest increase of state and federal prisoners” of any administration in U.S. history, according to the Justice Policy Institute. Communities of color have been most heavily impacted,

In Chicago, “a small band of communities” on the south and west sides have borne “the brunt of the incarceration regime,” according to a study by the National Institutes of Health. There, “the combination of poverty, unemployment, family displacement, and racial isolation is bound up with high levels of incarceration,” which “keeps some communities trapped in a negative feedback loop.”

While the bill passed, the pushback by black legislators certainly raised the political costs of this detour from progress. And we can hope it lays the groundwork for Illinois to leave Emanuel’s racist policies behind and finally embrace criminal justice reform.

Meanwhile, on the Northwest Side neighborhood of Jefferson Park, a courageous alderman is taking on the city’s history of racial segregation.  And Emanuel is refusing to support him. Affordable housing advocates, faith leaders, and some aldermen urged the mayor to retract his criticism of efforts to bring an integrated housing project to the Northwest Side on Wednesday, May 31, 2017.

Opposition from white homeowners in Chicago to racially integrated public housing is a continuous thread throughout the city’s history, going back at least to the Airport Homes riots of 1946, when racist mobs scared off a handful of black veterans and their families from moving into Chicago Housing Authority veterans’ housing near Midway Airport.

Ald. John Arena (45th Ward) has taken a small step ­– with big political risks – toward moving past that history by backing a 100-unit mixed-income housing development on a long-vacant industrial property.  Twenty of the development’s units would be rented at market rate, 20 would be reserved for CHA voucher holders, and 60 would accept residents with incomes below 60 percent of the area median (about $46,000), with preference given to veterans, and with some units designed for wheelchair users.

In part, the development reflects Arena’s agenda of addressing commercial blight and increasing density in order to restore the neighborhood’s economic vitality. That agenda has encountered resistance all along from some homeowners who feel the suburban character of the area is threatened.

But resistance to this project is of an entirely different character, as Arena has noted. It’s been vociferous, and it’s targeted potential tenants of the affordable housing units as undesirable. And, as Mark Brown documented at the Sun Times, it’s done so in the ugliest terms.

As Neighbors for Affordable Housing in Jefferson Park noted in a letter sent to Emanuel in early May, “the opposition’s own petitions, placards, social media messages and shouted slogans brim with unvarnished bigotry,” using terms like “leeches,” “ghetto rats,” “scum,” “thugs,” and “degenerates.”

The group sent Emanuel a 300-page dossier plus video with a representative sampling of such language, including ugly comments from leaders of neighborhood groups opposing the project.  They asked Emanuel to “help us take this small stand as a community to correct the injustices of our city’s past” and “work for equity, inclusivity, and racial justice.”

Emanuel has yet to respond to their letter. Instead, asked about the development last week, Emanuel declined to support it, and suggested that the opposition deserved to be heard.

On Wednesday, local supporters of the project, backed by clergy and civil rights groups, called on Emanuel to step back from his call for compromise with “those seeking to retrench the city’s segregation” and “use his bully pulpit to issue a clarion call” for racial progress.

A dedicated and growing group of Jefferson Park residents who support affordable housing and oppose bigotry – and who tend to be younger than those opposing the development, according to organizers – offer hope that we can move past our racist history.

If Emanuel wants to have any legitimacy as a leader of the Democratic Party in the Age of Trump, he needs to listen to them.

And if he wants to go down in history as being on the right side of the fight for racial justice, he needs to join them.