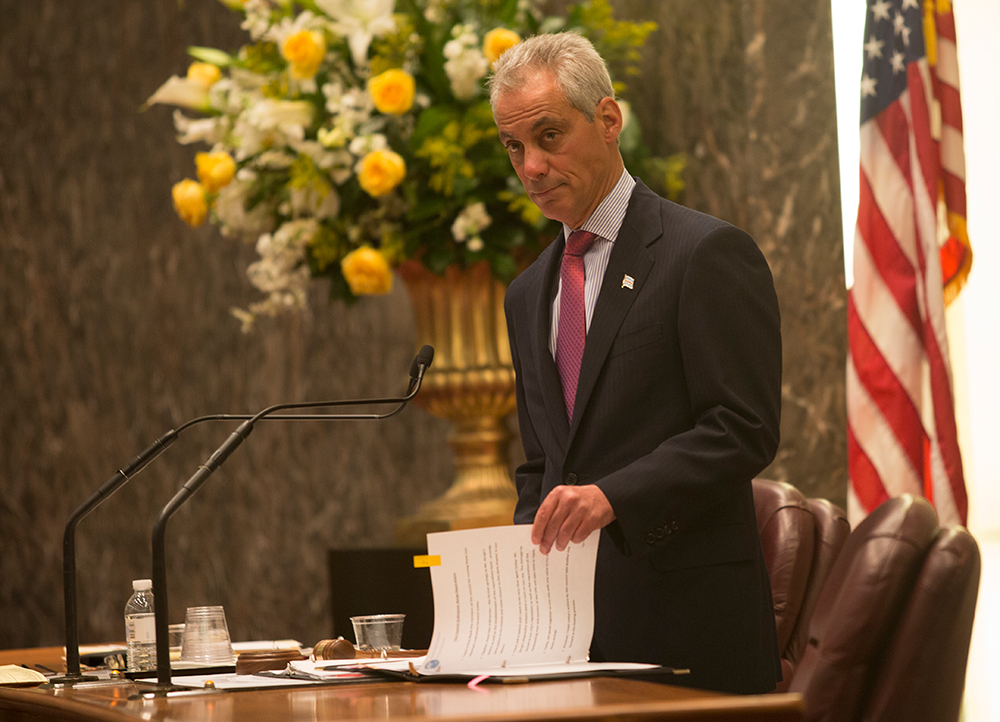 Since Mayor Rahm Emanuel has been in office, he has continued the Daley administration's practice of underfunding pensions and excessive borrowing.

Three years after he cancelled community hearings on the city budget, Mayor Emanuel is reinstating them.

The late Harold Washington first instituted the hearings in 1983 out of his commitment to open government. Each budget season he held numerous open sessions across the city where residents could raise concerns and get direct responses from department heads.  Richard Daley institutionalized the process into three huge meetings, where long lines of Chicagoans had a chance to speak their minds, and city officials sat up front pretending to pay attention.

In his first year in office, Emanuel transformed the hearings into a sort of talk show format, but after headlines highlighted negative reactions from his constituents, he “replaced them with focus groups stacked with supporters.”

While these new hearings will give residents an opportunity to vent, it’s likely Emanuel’s main goal is to sell his narrative of the city’s fiscal crisis.

But we shouldn’t forget the decisions that were made, and weren’t made, over the last four years. Emanuel’s decisions—including continued underfunding of pensions and continued borrowing to finance operations and debt service—have contributed to the steady series of credit rating downgrades the city has endured under his mayoralty. And they’ve added significantly to the magnitude of the pension crisis we now face.

Four years ago, for example, the mayor’s own TIF Reform Task Force recommended establishing a policy for closing unneeded TIF districts. Not till last month did Emanuel agree to wind down seven downtown TIFs (though it’s not clear how long that will take) and establish the TIF termination policy advocated by his task force four years ago.

Good Jobs First pointed out that Chicago’s pension funds were in good shape in 2000, when TIF revenues were well below $200 million a year; TIF diversions quadrupled in the same decade that the city began making inadequate payments to its pension funds.

“TIF has played a role in the underfunding of pensions in Chicago, and curbing the use of TIF can also play a role in shoring up the city’s financial situation,” according to GJF.

Emanuel has nibbled around the edges of TIF reform, unwilling to yield real control over this huge pot of money. He’s declared TIF surpluses to return a few million dollars to the schools and other taxing bodies, but he has kept secret the process by which the size of the surplus is determined. He’s shifted some TIF spending to infrastructure, but he’s continued to focus it downtown—and he hasn’t neglected private developers like River Point and the new McCormick Place Marriott.

Emanuel has also continued the Daley administration’s practice of using borrowing to finance operating costs, debt service and legal settlements. In April, faced with yet another credit rating downgrade, he promised to phase out those practices—giving 2019 as the target date.  (Four more years!)

He also agreed in April to pay $230 million in termination fees—financed by general obligation and sales tax bonds—to get out of over $900 million in interest rate swaps, where credit downgrades had triggered potential default.

That’s four years since the teachers union began warning about the risk those swaps carried. And it’s a different approach than unions and progressives have urged. They’ve called on the city to challenge the deals as potentially fraudulent. Emanuel preferred to borrow a couple hundred million dollars in order to make the bankers whole.

Then there is the pension issue. The Chicago Tribune recently detailed how, coming into office four years ago, Emanuel accepted a legislative deal that had been “panned by government finance experts” to lower CPS pension contributions for three years, adding tens of millions to future pension costs.

Similarly, with the city’s own pension funds, he’s continued underfunding them throughout his mayoralty. That’s a major reason the city’s credit rating has gone steadily down.  Recent downgrades have noted that the pension reform plan Emanuel passed in Springfield ramps up payments, but very gradually—continuing to underfund pensions for several years.

When Emanuel’s bill reducing benefits for municipal employees and laborers was declared unconstitutional, he vowed to appeal; it will be heard by the same Illinois Supreme Court that overturned a similar reform of state pensions. It’s not given much of a chance. The mayor’s current strategy seems to be delay, delay, delay.

A year before Emanuel took office, a mayoral commission on the city’s pension funds urged immediate action, noting, “Every year we don’t act makes the ultimate cost even greater.”

It’s a message Emanuel hasn’t taken to heart. And that’s how we got to where we are.