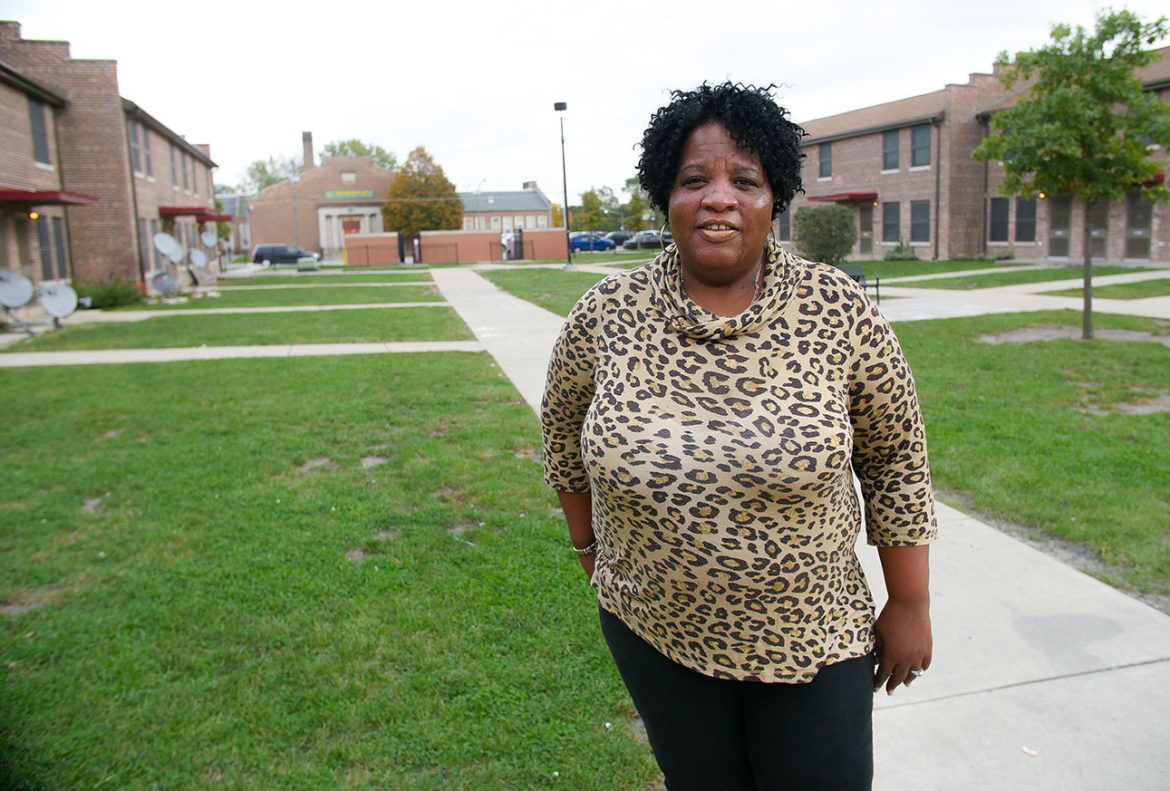 Cheryl Johnson’s family has been advocating for improvements in the Riverdale community for decades. Her mother, Hazel, worked with a young Barack Obama on an asbestos removal campaign at the Altgeld Gardens housing project in the 1980s.

Cheryl Johnson ticks off a few scenarios for how long it might take to get from her neighborhood to a nearby assembling facility for Ford Motor Co. If she drives, it’s five minutes to the plant on South Torrence Avenue near the Calumet River. If she bikes, it’s 22 minutes. If she walks, it’s a half hour.

“But if I have to use public transportation, I’ll have to catch three buses and walk six blocks just to get to the plant,” said Johnson, who lives in Riverdale, one of Chicago’s poorest and most isolated communities – and still haunted by its industrial legacy.

Cut off from major transit lines, Riverdale is 16 miles south and east of the Loop. It’s bound by the Illinois Central Railroad on the west, the city limits on the south, the Bishop Ford Expressway on the east and 115th street on the north.

Only a few bus lines go near Riverdale — the Number 34 South Michigan being the most direct.

In the geography of opportunity – a term that seeks to capture the impact of housing segregation and sprawling development on racial and class mobility – commute time is a significant factor for residents trying to escape poverty. The longer the average travel time for an area, the harder it is for people to escape poverty.

Riverdale has the highest unemployment rate in the city at 41 percent – nearly five times the citywide average, according to 2014 statistics. Of Riverdale’s working population, 37 percent spend more than an hour commuting to work, the second-highest percentage of any neighborhood in Chicago (surpassed only by the nearby Burnside neighborhood).

A correlation exists between high unemployment and long commute times, according to a Reporter analysis of Chicago community areas.
Source: U.S. Census Bureau

In this remote city pocket where President Barack Obama cut his teeth as a young organizer in the 1980s, the proposed extension of the Chicago Transit Authority’s Red Line from 95th Street to 130th Street in Riverdale could change fortunes. The $2.3 billion transit project could bring thousands of construction jobs, and when it’s constructed, train service could make it easier for residents to get to work.

This month, the CTA released its preliminary environmental impact study, a major step toward securing federal funding for the project.

“If the city moves on the Red Line extension, what a great benefit it would be for this area,” Johnson said earlier this year. “We could go all the way from the Riverdale community area all the way to Loyola, to Howard, to Rogers Park. One stop. Straight. How convenient would that be? For opportunities and accessibility to other opportunities. That’s a huge issue for this area.”

Riverdale’s population reached its peak population of 15,018 in 1970 after the construction of Eden Green, one of the nation’s first majority black-owned and -operated townhouse and apartment developments in 1968.

Since then, Riverdale has lost residents and jobs, and many of these homes are now vacant, according to the 2010 Census. Riverdale had the highest vacancy rate—45 percent of any Chicago community.

Today, Riverdale has a population of 7,190 residents and a median income of $14,000. Almost 70 percent of residents report living in poverty — which is defined by the federal government as below $24,000 for a family with two adults and two children.

Forty-six percent of the 201 local businesses that remain in the neighborhood are retail, food or other service companies. Manufacturing businesses make up just 6 percent of local companies and construction less than 5 percent.

Historically, Riverdale has been supported by industrial manufacturing, where products are produced and shipped to other places. Over the years, the economy has shifted to the service and technology sectors, hurting the community and others like it.

University of Chicago’s Carmelo Barbaro said access to transportation is a “critical factor” for low-income workers who are trying to adapt to a new economic landscape absent stable manufacturing jobs. It is very easy to end up in a situation where you lose your job through the course of several instances where you failed to balance your childcare needs, transportation needs and your work schedule, said Barbaro, the executive director of the Poverty Lab, a local research institute.

Attracting new companies to an area like Riverdale is difficult. Businesses locate in thriving markets, and the high poverty rate in Riverdale is a deterrent, exacerbating efforts to bring jobs the community. River Bend Prairie Landfill sits across the river from Altgeld Gardens on the border between Chicago and Dolton.

Then there is the legacy of bygone industries, which have left the land contaminated. Riverdale is home to six active Superfund sites, areas where local pollution poses a health risk, according to the federal government. Any new business would likely have to spend money to clean up lead and other heavy metals in the soil.

In 1945, Chicago and the federal government built Altgeld Gardens — a housing development where Johnson’s family has lived for decades. The development rapidly transformed Riverdale into a residential area.

Altgeld, a maze of red brick homes along the nearby Little Calumet River, a forest preserve and a water treatment plant, is surrounded by many former factories, landfills, dumps and polluted rivers and creeks. The area has been plagued by a range of pollutants — lead, PCBs, DDT, DDE, DDD.

In the 1980s a young Barack Obama worked with Johnson’s mother, Hazel, on a campaign to exorcise asbestos insulation from the development. The elder Johnson helped pressure President Bill Clinton to sign an executive order in the early 1990s requiring that the U.S. Environmental Protection Agency consider the impact of pollution on low-income and minority communities – a key moment in the environmental justice movement.

Cheryl Johnson has continued her mother’s legacy of fighting for equality in Riverdale. Johnson, who runs the social justice advocacy organization People for Community Recovery, looks around her neighborhood and sees people who want to work – and available land.

But, she said, it is challenging to get Chicago’s leadership to see the value in Riverdale.

“Both sides have to compromise,” she said. “Industry may have to spend more, and we might have to give something up, but damn, let’s have these conversations.”

Breaking the cycle of poverty and unemployment

“When you look at Lincoln Park, Wrigleyville and other neighborhoods, there is a quality of life that exists there that does not exist in our area,” said Andrea Reed, executive director of the Greater Roseland Chamber of Commerce in the nearby Roseland neighborhood. “People have nice stores and boutiques and coffee shops and people are getting out on the weekend to the businesses in the area. We want to be able to improve the area so that we have that, so people want to live, work and play in that area.”

Some experts envision a similar future for Riverdale. Margaret Simms, director of the Low-Income Working Families initiative at the Urban Institute think tank in Washington, D.C., said Chicago can undertake an assessment of the workforce within the area to identify what businesses would generate jobs there. That would be “part of a strategy that promotes businesses that people are qualified for,” she said.

Chicago must be “more aggressive” with its vocational training and redevelopment policies, she said, adding that too often politicians are trapped in short term thinking, looking for results within an election cycle. She said a true solution would take longer. “This is an issue for public policy. This is not easy and quick — it requires a sustained strategy over time and it may not be in sync with political strategy and leadership,” Simms said.

For Reed, creating jobs in a community goes a long way to solving other problems that plague areas like Roseland and Riverdale — problems like violence and drugs.

Johnson said the Red Line could do that for Riverdale.

“Whenever there is transit, there are businesses,” she said. “We have the most developable land in the city of Chicago, so why not?”

This story is part of a series about how the proposed Red Line extension will affect residents on Chicago’s Far South Side. Sign up to get these stories in your inbox.

Kevin Stark is an independent reporter who focuses on environment and climate change. Follow him on twitter @starkkev or send him an email kstark@sfpublicpress.org.

The proposed extension of the Chicago Transit Authority’s Red Line from 95th Street to 130th Street is among the most costly and potentially transformative public infrastructure projects the South Side has seen in decades. At an estimated cost of $2.3 billion and affecting 128,000 people, transportation experts say, if done with the community in mind, it could bring thousands of jobs and economic opportunity to the area.