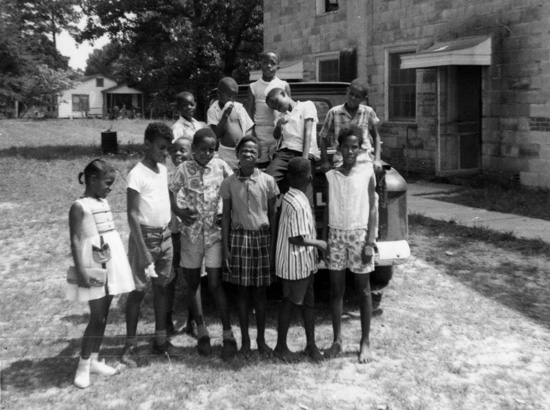 A group of African-American children gather around a pickup truck outside of a Freedom School in Hattiesburg, Miss., where volunteers taught people to be politically active. (Photo courtesy of the Wisconsin Historical Society/WHS-97475)

Marjorie Anne Kinsella was a sophomore at Loyola University Chicago when she applied to help register black people to vote in Mississippi in the summer of 1964.

When asked to describe her qualifications for such a dangerous task, Kinsella, 26, wrote: “Am able to communicate on friendly level with persons opposed to integration. Can appeal to persons [sic] religion and moral responsibility to accept integration. Am non-violent, white, and female and feel those opposed to integration will not use violence against me but will keep things on discussion level.”

I found her application for the “Mississippi Summer Project” in the archives of the Chicago Area Friends of SNCC at the Chicago Public Library’s Vivian G. Harsh Research Collection. The paperwork doesn’t indicate whether Kinsella was selected to join nearly 1,000 students, many of them white and from elite colleges, to participate in what became known as Freedom Summer. I couldn’t find her to get an answer.

Unfortunately, no one who supported integration escaped the unbridled white hate in the South at that time.

This summer marks the 50th anniversary of Freedom Summer, which trained national eyes on Mississippi and demonstrated the extremes to which white racists would go to prevent blacks from voting. The photos on these pages are from the Freedom Summer collection at the Wisconsin Historical Society. The summer began with the disappearance of three civil rights workers — James Chaney, Michael Schwerner and Andrew Goodman — and ended with the discovery of their corpses. White supremacists had murdered them. Protestors gather in front of a Woolworth’s store in Meridian, Miss., while law enforcement officers look on. [Photo courtesy of the Wisconsin Historical Society/WHS-99228]

The call to head south was issued by the Council of Federated Organizations, which was supported by the NAACP, the Congress of Racial Equality, the Southern Christian Leadership Council and the Student Nonviolent Coordinating Committee (SNCC), the lead organizer for Freedom Summer.

The students who went to Mississippi have been celebrated for good reason. Like the three civil rights workers, some gave their lives. Others were beaten within an inch of their lives. But this summer of remembrance, the black people in Mississippi who awaited eager students like Marjorie Anne Kinsella deserve our attention, too. They knew the terror that stepping out of their “place” would bring. Yet they did it anyway. And they welcomed, housed and protected the students.

Long before the summer that changed the state and resulted in the creation of the Mississippi Freedom Democratic Party, which challenged the Democratic Party’s white primaries in the South, black people in Mississippi had been paying the price for organizing. “They were kicked off plantations and lost their jobs and homes,” says Fannie Rushing, a professor at Benedictine University who along with Sylvia Fischer donated the materials to the Chicago Area Friends of SNCC archives.

The friends group was organized in January 1963 and received a dispensation from SNCC to participate in local political work, including a successful Chicago school boycott protesting segregation.

One of its first campaigns was collecting food to send to Mississippi, where hundreds of black people had lost benefits and jobs for attempting to register to vote.

In two months, the “Food and Funds for Freedom” campaign gathered 113,000 pounds of food, according to documents in the archives. The outpouring of generosity from Chicagoans was overwhelming, but not surprising. Many local African Americans traced their roots to the South, part of the Great Migration to the North. The mud of the Mississippi Delta still clung to the soles of their shoes.

There was so much food donated, Rushing says, that SNCC supporters had to store it in a union hall, one of the few places that was large enough to accommodate the donations. And when the friends group didn’t have enough money to deliver the food, entertainer and activist Dick Gregory paid to have it flown to Greenwood, Miss., where SNCC’s office was located. By the time the idea for Freedom Summer took shape, the organizing in Mississippi and the South had already reached a tipping point, according to a memo in the local SNCC archives. “The coming summer of 1964, forebodes a crisis in race relations in this country of unprecedented magnitude. Throughout the north and the south, the years of slavery and semi-slavery are coming to seed with increased unrest on the part of the Negro community. Nowhere is the Civil Rights Movement more prepared to channel the frustrations and the aggregations of the Negro community than in Mississippi.”

The students who went to Mississippi couldn’t have done anything without the people, Rushing says. “All [the people] needed was for the movement to come.”

Susan is the editor and publisher of The Chicago Reporter. Email her at srichardson@chicagoreporter.com and follow her on Twitter @SusanEudora.