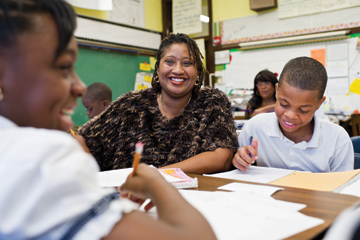 Nestled among bungalows on the far outer reaches of the South Side, Shoop Elementary was once touted as an example of how the district’s promotion policy can work.

In the first year of Mayor Richard M. Daley’s policy banning social promotion, a third of Shoop students in the benchmark grades—3rd, 6th and 8th—were held back. Students weren’t coming to school, and then-Principal Lee Brown told Catalyst Chicago that too many students and their parents did not take classes and homework seriously.

But with the threat of being held back a year, students started to get their act together.  Average daily attendance shot up from 89 percent to 95 percent, and an increasing number of students were passing their classes. The 8th-grade teacher said she was in “heaven.” (See related story.)

The next year, the retention rate fell by 10 percent.

Over the past almost 15 years, Shoop has had its ups and downs in terms of test scores and the number of students who are held back. Most recently, in 2010, about 4 percent of students in the benchmark grades were retained.

But the low rate doesn’t mean the policy has lost its teeth—nor that test scores and achievement have shot up.

Principal Lisa Moreno says the threat of retention continues to be a motivator. Each quarter, she personally looks through the report cards of students in benchmark grades and flags those who seem to be falling behind. Sometimes she sits in the hallway to catch a word with parents. Other times, she has parents come to her office to get the report cards.

With so many students on the edge, Moreno says there might be too much emphasis on simply meeting the low bar set by the policy. She wants her students to aim high.

Plus, meeting the promotion standard on test scores does not automatically correlate with the ability to succeed in high school. A 2008 Consortium on Chicago School Research study found that students must exceed the standards to do well in high school and have a reasonable chance of scoring a 20 on the ACT, which is considered the minimum score to get into selective colleges.

Moreno says she’s still undecided about the promotion policy. With budgets so tight, she has to be creative to offer supports for students who are struggling.

In the past she has used discretionary funding to pay for retired teachers to work as tutors, used resource teachers and turned to volunteers. And rather than put fear into students, she’d like them to want to do well because they see it as a path to a better future.